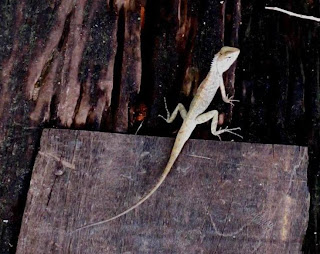 After an hour of browsing and photo taking, when we were finally able to tear ourselves away from “The (amazing) Bromeliad Garden” located just to the right as one enters “The Nong Nooch Tropical Botanical Gardens,” we made our way back out to the park’s main boulevard. We weren’t quite sure which way to go, but from the brochure map clutched in our thoroughly sweaty hands, it sure looked like we had plenty of possibilities. We decided to play it by ear and just follow whatever good things we saw in front of us.

Immediately to our front, out the gate upon departing from the lovely bromeliad section, we once again viewed the charming little manmade lake, in front of which we had parked our motorbikes more than an hour earlier. We soon found that this water feature was the continuation of a much larger lake system, the rest of it being across the street but hidden by thick foliage and buildings.
Following the sidewalk along the main road we crossed to the other side just past the lake to our left and entered a jungly section by way of a little weather-worn wooden bridge. Seeing a foot-long lizard warming itself on the planks in front of me I paused to take a quick shot of it.

On the concrete jungle path, which now had us climbing, we followed a boulder lined stream to our left, the seemingly unmoving brown waters of which eventually ended up in the lake behind us after flowing under the road, or it would have flowed I suppose whenever a hard tropical rain caused it to. In no time we topped a rise finding the origin of the muddy colored stream. There before us was a large expanse of another much larger body of water than the one across from the bromeliad garden behind us. Looking around, now we noticed that Nong Nooch was laced with hundreds of meters of an intricate system of wide elevated walking paths interspersed with even higher viewing platforms. At that point we were only at the beginning of the paths and platforms but I could tell it was going to be amazing.
But before we got involved with the elevated viewing paths, we decided to go and explore what was offered at the lake. Approaching it we saw that the viewing paths extended well out into the waters. A sign displayed prominently near the entrance to the pier like pathways announced what was out there in the complex of steel poles and walkways: “Feed the Giant Arapaima!”
Thinking about the sign as we passed by it deeper into the maze of platforms, I thought ‘Well that’s strange—I thought the arapaima was a South American fish.’ Sure enough, it IS native to South America, especially to the Amazon region. In fact, recently I saw shows on both The Discovery and on NatGeo channels detailing how the arapaima has been so successfully bred in Thailand that the largest samples on record are now probably in Thailand, some of them longer than 7 feet long weighing many hundreds of pounds. It seems that the Brazilians have eaten all the huge ones that they have available. Like I keep saying in these posts, the Thais do nothing half way.

I took a few pics of the arapaima viewing and feeding area, a square enclosure surrounded by a multi-tiered complex of vertical support poles, safety rails and walking platforms to provide as many people as possible easy access to the sight of the giant fish in the muddy waters below. We chose to stay at the top level to watch the folks below go about feeding the 6 foot plus monsters lurking in the waters below. 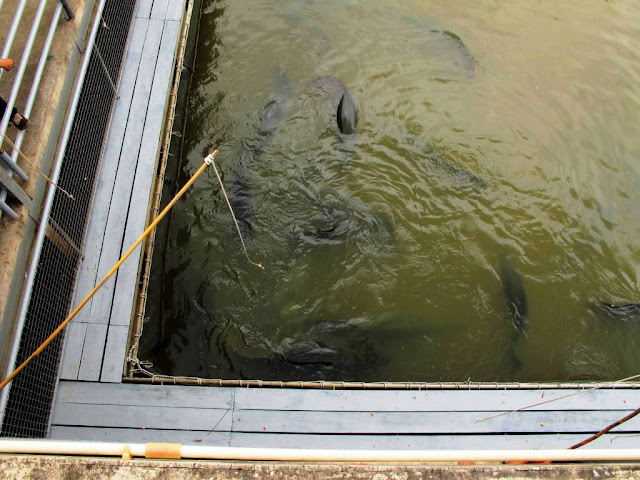 I’ve noticed that all Thai theme parks love to add to their revenue by offering their customers the chance to feed the animals, whether it be hungry crocodiles, elephants, horses, sheep, parrots, and of course—huge fish! It’s a pretty good racket. During my two trips I must have easily paid more than $300 in all doing it. I find it irresistible in spite of my chintzy side that is always whispering to me that I shouldn’t. I’m proud of myself that this time I chose not to feed the fish, perhaps because by keeping above it all I removed myself from the temptation. Unfortunately for my pocket book though, later on my compulsion to put food in front of animals would rear its ugly head and I would give in to it. Woe is me.

As far as feeding the arapaima, one pays a couple bucks to be given a pole with a piece of chicken tied to the end of it. We watched from above as people would dip the chicken pieces near the water above the heads of the gigantic fish, trying to tease a snapping reaction from them. From our vantage point the deep green broad backs of the fish made them appear more like fat alligators than like fish—headless alligators. More often than not the powerful fish grabbed the meat off the line before it could be jerked away. It was fun for me to vicariously enjoy the sight of someone else wasting their money for once. Suckers! 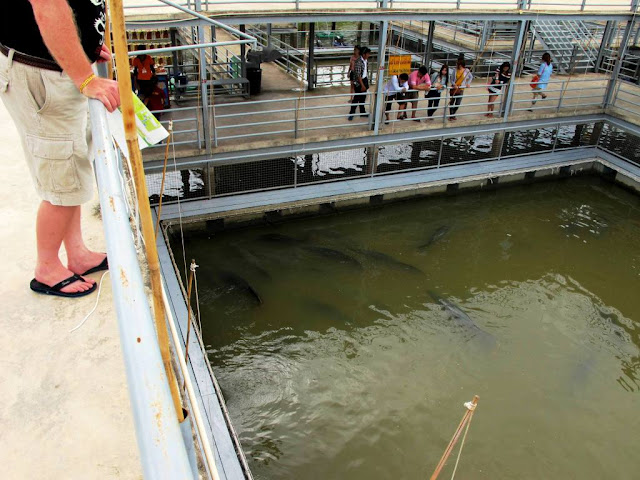 We soon had our fill of watching the monster fish since we really couldn’t see much more of them than the faint outlines of their fat long bodies in the murky water. What they should do is create a viewing window that puts the viewer beneath the water line; now THAT would be cool. I'd PAY to do that.

We departed the lake by way of a different pier than the one we had entered on. It led us to a set of stairs up the steep bank, more like a hill, that took us up to a tree shaded plateau, where a mostly deserted snack and drink outdoor bistro like place awaited us. By this time we were all pretty hot and thirsty so while the girls got drinks we found a table with a nice view of the lake and settled down to rejuvenate a bit. We marveled at the beauty of the park, noticing the huge floating gardens across the way while making a mental note to make our way over to them eventually, something that we never got around to doing regrettably. Over our several trips to Nong Nooch we STILL didn’t get a chance to see it all. 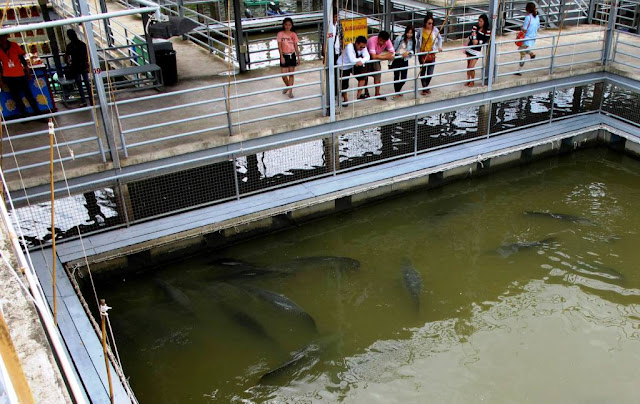 Half way through my drink I absentmindedly began doing my pocket checking ritual—there’s my wallet, there’s my eyeglass case, there’s my scooter keys. Wait. Oh crap! I don’t feel my keys! What the…! Jolting to my feet I urgently emptied my pockets unto the glass of the table top. Then pulling my pockets inside out I groaned, “You’re not going to believe this folks. I LOST my scooter keys! Damn it!”

Life went from a moment of carefree relaxation to panicky dread.

Come back in a couple days and I’ll tell you what happened. (chuckle)
Posted by PhilippinesPhil at 6:41 AM 4 comments: