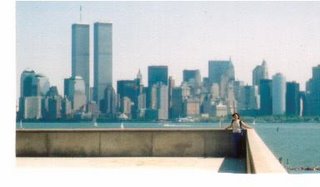 at the base of the Statue of Liberty...

This is the first time I’ve written about “where I was during 9/11.” Five years on and sometimes a whole day or two goes by when “that morning” doesn’t cross my mind, a function of the therapeutic effects of time I suppose. Thing is, I don’t want to forget. Mentally, I “rip the scab off” as often as it takes to keep that horrible memory fresh and throbbing. I WANT to keep the anger and sorrow alive in my mind.

Even as I write this, our people continue to fight the beasts that did this to us. Our enemies’ ethos – that of jihad, of hatred and intolerance – is hostile and unrelenting; hence, we must maintain a like-mindedness as far as maintaining a willingness to rise up to meet them, and the nearer “we close with them” at their “source” the better. (Hint: we can’t much closer than Iraq!) Our men and women in the law-enforcement and intelligence fields, and in the armed forces, maintain this high level of aggression, even as most of us go about our normal, self-serving lives.

The zealots of hatred circle silently the walls, waiting for an opening to exploit a single moment of unwariness with the express purpose of bloodying and frightening us—to “throw us off our game” if you will. The fiendish members of Al Qaeda and Hezbollah know that terrorizing the “irresolute and unwilling” among us will lead to second guessing and cries for submission. Our enemies know that “our weak link” is that which we love the most—our freedom 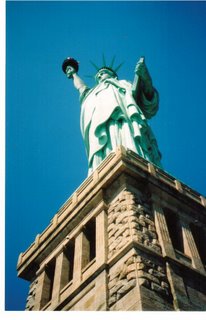 s, and the cumbersomeness of our liberal democracy. (Keep in mind that inherently, ALL free societies are “liberal” by definition). And it’s true—only five years after the unthinkable happened it seems that half or more of my fellow citizens have let the anger of that day fade away, with many even going so far as to blame the attack on their own country – like a traumatized animal biting at its own wounds – attacking itself instead of the attacker.

On the morning of September 11, 2001, I was home, in bed and on drugs, less than a week after foot surgery. A day before my operation, my 20 year old daughter, Becky, and I had made a pilgrimage to the Statue of Liberty and Ellis Island. Just across the waters of the wide Hudson River outlet, the twin towers had dominated the Manhattan skyline. The imposing presence of the World Trade Center was definitely part of the “experience.”

The phone rang, momentarily shaking away the wooziness induced by my pain-killers. It was my mom calling from Michigan. She sounded tense and worried, “Phil, are you watching TV? A plane just flew into the World Trade Center!”

I turned on the television in my room and saw a tower, made smaller by the confines of the screen, black billowing smoke pouring from a gaping hole high in its side. At that point, we figured it was just a horrible accident and nothing more. My mom and I watched from our respective States the unlikely sight of the burning mega-building, and casually chatted about our recent trip to the statue and how brilliantly beautiful the Manhattan skyline had been that day. 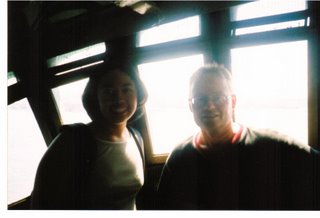 Our nonchalant chitchat ended abruptly when a second large commercial aircraft zoomed and slammed into the burning tower’s twin. I knew immediately we were under attack from some very evil force. I wanted to know WHO it was and I wanted revenge—I wanted it NOW! Forgetting myself I cursed, apologizing in the next breath.

“Mom, we are watching live a modern day version of the attack on Pearl Harbor. Whoever these people are they are in big trouble,” I said rapidly and evenly.

At that second I had never been so happy in all my life to be a member of my country’s armed forces. I wanted to be a part of the machine that I knew at that very moment was revving up its powerful and merciless engine of destruction. The rage I felt was boundless. My body shook uncontrollably with it.

My mom was now so shaken that she could hardly speak anymore. As we said our goodbyes and “I love you’s,” she bade me to be careful, knowing that where we lived in New Jersey that we were not that far from the destruction she was staring at on her TV set.

I hopped into the living room to watch with my girl. I sat heavily on the sofa across the room from her. For the next half hour or so we hardly spoke a word as we watched the events unfold in New York City. What was there to say? My mind was brimming with blind fury and the palpable need for retribution. Finally, I got my constricted vocal cords unlimbered enough to make a comment.

“People are dying in there Becky—a lot of people.” I almost choked as I said it, especially when shortly after my remark reports came of desperate jumpers, preferring to go that way instead of incineration.

Thoughts of the dead and the agonizing suffering of the dying overwhelmed us. We dared not look at each other, our eyes instead locked there, on that unbearable vision in front of us. And then, from the speakers came screams and cursing and a shocking rumbling as the first tower pancaked straight to the ground in a giant cloud of concrete dust and smoke. In spite of myself, I groaned and tried not to sob, instead, choking sounds came in fits and starts from my closed off throat, while unruly tears rolled down my cheeks unchecked. I could hardly see the TV for them. Devastating grief inundated my fury.

After the first one went, I knew the second tower would also go; and soon enough, just as with the first, the same explosion of rumbling dusty collapse ensued. At the same time, a huge hole was rent in my soul. It’s been said a million times, but at that moment I was changed forever. I could actually sense the lives winking out of all those thousands of innocents just a few score miles from where we sat.

For the rest of that long day and long into the night we watched over and over and over the replay of those towers coming down. My emotions were used up. There was nothing left to feel. Soon, I felt nothing at all.

Over the days and weeks ahead I took comfort in having a commander in chief that seemed determined to go after the people who hurt us so badly that day. Seeing his resolute determination to pursue relentlessly our enemies took some of the sting away and gave me hope that we would win by having the gumption to fight back.

After these five short years, I must admit that there are times now that I feel that the president is not doing enough—that he is allowing his Secretary of Defense to fight this war “on the cheap” instead of throwing the full fury and might at his disposal into the teeth of ALL these religious fanatics that seek our demise. But, I also realize that is just my typical American impatience wanting an immediate victory.

Luckily for us all, GWB, not the so-called "cowboy" his haters have labeled him, knows that we can’t kill every terrorist out there that seek our destruction. Instead, he knows that keeping them at bay will have to do, and with our adversarial political system that will probably be the best we can hope for. That is UNTIL one of these crazy bastards sets off a nuke – Then, ALL bets are off!

As I’ve said before—we only lose IF we disengage and quit fighting. Luckily for us, and luckily for the free world, the USA is NOT Spain. I’m convinced and hopeful enough to believe that EVEN if the democrats take power that we will continue to stand up to these Islamic thugs. After all, FDR and Truman were democrats and they proved to be some tough cookies. Just the same, I’m keeping my fingers crossed. 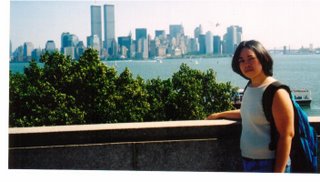 The US blogosphere and media are making sure that that day of infamy will not be forgotten.

And thus, in a big way, their vigilance and awareness have enabled many of us, me including, from simply making mental notes of that event. Minus the need to lend words to articulate still tender sores.

Except to add. That yes, we here in the West Coast endured the same traumatic days inflicted on an entire nation. Three hours earlier than the rest of the continent.

Oh, but it IS forgotten Amadeo... by more and more of us in the way that it NEEDS to be remembered. Fewer and fewer people recall the seething need of the momet to punish and prepare. The killers out there who want nothing more than to do it again, are still filled with the same hatred of our ways. They hate our music, our movies and our ability to choose, they despise everything about us. They won't rest until all women are veiled and all men have converted to Islam or been dispatched. It was a very telling moment when the FOX NEWS people kidnapped in Gaza last month were released ONLY after they were forced to convert to Islam. That ridiculous act, forcing someone to take up a religion under the threat of losing their life, is the epitome of radical Islam. The WTC didn't fall because of our policies in the Middle East, it was attacked because we haven't been converted, because they see us as evil. I've personally witnessed the spite these folks feel toward us, I've seen it in their eyes on Arabic Streets. It's real.