I came home yesterday evening and was shocked to find the house covered in garland, outdoor lights and a host of other Christmas decorations. I was shocked, but not for the reason most of you might think.

Coming through the door, my littlest one rushed m 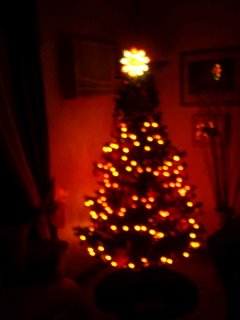 e like Dino on the Flintstones and grabbed me around the knees.

Sarah’s only a few months past three, so she probably doesn’t remember much of last Christmas, and nothing of her first two. She took my hand and enthusiastically pulled and led me into the living room where, sure enough, there it was, just as it looks in the picture. What shocked me was that it took so long for all the Christmas stuff to get put up this year.

I couldn’t believe it when I heard my first Christmas carol on a local radio station back in 2002, the year I first got here, and it was just the first week of September.

But no, once the “…ber” months arrive—you know, September, October, and so on—THAT is when the Christmas season effectively arrives in the Philippines. And truthfully, it doesn’t thrill me in the least. I’ve always been a bit of a scrooge anyway, and over here I am even more cynical and less enthused over the so-called Holiday Season.

Obviously, it lasts much too long for my tastes. It’s long enough in the where for most people it starts the day after Thanksgiving, the last Thursday in November. But in the Phils, it seems interminable. It’s a good thing ALL Christmas trees here are artificial, otherwise they’d have to replace them at least twice before the big day.

Another problem I have is the unhesitatingly unembarrassed way some will ask for “their Christmas.” It’s undignified, but folks do it and start “dropping hints,” if you can call them that, from the time the season begins. I find myself avoiding going out from a week or two before the 25th until the day after, mostly because I start feeling so guilty about not having everyone’s “Christmas.”

What I do now is budget about $200 every December to hand over to the various peripheral people in my life such as the guards in my subdivision, the folks who manage my gym, the guys at the gas station; you know, people like that. I buy a box of Christmas cards and put 500 pesos, about $10, in with each one. But once the last card is gone, I start hiding.

I’ve thought about why the season starts so early here. Comparing it to our traditions in the States, I think I have an answer. Although the Philippines has more official holidays, including the “snap holidays” the president constantly announces whenever she feels like giving herself a three-day weekend, it seems that most people just see them as days off with no real underlying meaning. Sure, they have their Independence Day, Memorial Day and All Souls Day, but I’ve noticed they don’t really have any impact on people’s consciousness.

Back home, our holidays clearly define the beginning and end of the divisions of our year. Memorial Day marks the beginning of summer; July 4th, Independence Day, marks the middle; while Labor Day marks its end, and the beginning of school. Halloween, while not a holiday, nevertheless is remarkable enough that everyone looks forward to it and the fun and entertainment that it brings to our lives. Thanksgiving is a big one; without a doubt it signals the start of Christmas Season, and it traditionally brings families together and causes us to thank God for our blessings. And so it goes on… all the way through Christmas and New Years.

No, here Christmas overwhelms ALL holidays to the point that it seems like it is the ONLY holiday. Easter is fully appreciated in the and is given its full religious significance, and for me, it is my favorite holiday over here, mostly because it doesn't involve fireworks! New Years is like an afterthought to Christmas, where they get to set off millions of firecrackers, but that’s about it. What New Years really marks is the beginning of the countdown ……. to the NEXT Christmas!

Posted by PhilippinesPhil at 2:57 AM

It gives me great joy to share the magic of Christmas even if it is a little bit early, as this is the most awaited holiday season of the year. Rather than being happy over a new born year, I usually end up spending all my energy imagining about yet another Christmas that I shall be celebrating in a better way than the one i did the previous year. A new plan for the new Christmas- a Christmas wall clock on the right wall and colorful candle sticks all around...soothing wall papers and...more bright ideas! Peep into this amazing Christmas Blog to check out some really cool stuffs and unique ideas

As for the 500 pesos, that's way too much Phil! Put in just a couple of hundred pesos (or even just a hundred pesos!) and it will be ok. Perhaps it's because you're American that they expect to receive more? But Phil, 500 is really too much.

I think you've been gone too long from the States Phil. The last couple years, most stores have started putting up the Christmas stuff right after Halloween.

I understand you on this one. I'm a holiday scrooge too although I really do like the Christmas mass in the Philippines.

Millions of firecrackers? I would guess trillions would be closer to the truth.

Wat and Ed, putting up Christmas decorations up in your home before mid November is extreme to me. If stores are trying to get a jump on reminding folks to shop there for Christmas, if I was in those parts they'd lose me as a customer, and right quick. Hearing carols for three weeks is all I can really stomach before I start to babble and drool. Bah, humbug!

And Wat,I'm going to take your advice and cut my "christmas" in half. Thanks! I'll tell YOU told me too!

October is a bit too early for me to decorate. We buy real Christmas tree every year, so we wait a bit later to decorate so we can have the tree up till New Year's. I would decorate around the last week of November, maybe even early December.

You are way to generous, can I be in your Christmas list too? (he!he!)

Hey Leah, I see you live in Canada too, like Niceheart. How long since you were here in the Phils? Did you say you used to put up a real tree when you lived here? And hey, if you see me while I still have my "Christmases" on me, then yes, you can have one!

Hi Phil, yes I've been in Canada for 12 yrs now and I haven't been back since. For sure, a lot of changes.

The trees are from the Christmases here.

Back in Pinas, we used to have only the fake trees.

What, you've got your tree up already? Yeah, they do start celebrating there early. Here, I usually put up the tree around last week of November. And yeah, Christmas decorations will start appearing in the stores after Halloween. As always, you've got very interesting thoughts on why Christmas starts early there in the Phils.

A couple of years ago I came to visit the Phils and I arrived in Manila Jan 21st. While walking to collect my luggage, the airport sound system was playing Little Drummer Boy in the background. Xmas starts very early and ends late!

Wow, Christmas starts very early over there! I do remember the Christmas season in the Phils was very fun, *especially* New Year's. I couldn't get excited about the acorn dropping here in the States.

If you're a holiday scrooge, you ought to come here to Cambodia where there is hardly any Christmas at all, being a buddhist country. It's quite lonely though for Filipinos like me who, as you say, consider Christmas as THE holiday. :)

Hey Nice, you know, when I look at your comment above I can't really tell if you're talking about what you do now in Canada or what you did while living here. Anyway, I left out the barrio festivals; those are very much enjoyed appreciated by all, but each place has it's own, yes?

What's up bw? Nice to see ya....Music played on sound systems here is a mixed bag. Talk about eclectic tastes! When i first got here I was shopping at a large store over on Clark and they are playing very loud and very foul Gangster Rap. It was an album of it, and certainly not appropriate for a family store's sound system. I asked for the manager and he agreed to change the tape, but I could tell he didn't have a clue as to why I objected. I'm not so sure anyone pays that much attention to what's playing here. It's maddening at times for me. Filipinos are definitely NOT anal!

Aurea! I think I would like New Years better here, EXCEPT they do the EXACT SAME THING for Christmas one week before, at midnight both days they set off a war of fireworks and it goes on and on till 3 a.m. I HATE IT! The first year was tolerable, now I just tolerate it; what can I do, right? Whine, moan, complain....

Toe, welcome... Cambodia huh? Maybe it's time for a Holiday Trip, and DURING Christmas! I like the sound of that. Well, you've piqued my interest...a Filipino in Cambodia. If you have a Blog I'm there.

Toe got me interested as well. I don't hear about too many Filipinos in Cambodia.

And yes, Phil. You're way too generous! Don't give Ninoy Aquinos anymore. You can even give food baskets instead. Bulkier to carry around, but with the cannod goods in there, it's bound to be heavy enough for them to appreciate to gesture :-).

Nice suggestion, canned good or food baskets, but I tool around on a scooter so that's not going to happen... Dang, I forgot all about Toe; let me go check him out now...

Hey, Phil. I was talking about how I celebrate Christmas here in Canada. And by the way, Toe is a her. :)

Toe is a her.... Well that's humorous.... I remember reading something about her getting that nickname, it went from foot down to Toe... kind of like Puff Daddy becomeing PDddy.... Sheeesh.