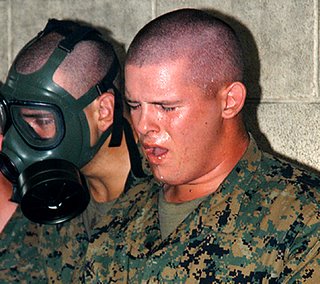 It’s been a while since I posted my last bootcamp letter, so here’s another. In it I describe what it was like training with our gas masks with real tear gas. It was a horrible experience to say the least, and I didn’t tell the fam about the DIs taking us back into the gas Quonset hut at the end of the training for some “SI.” Those bastards made us do jumping jacks, bends-and-thrusts and pushups. The deck was so slippery with snot and puke that our hands would not stay under us in the slickness. Most of the gas had dissipated, but enough was still in there that we could not really breathe well while we exerted. Still, I don’t fault our drill instructors for doing this to us. War is a lot worse and it certainly made us realize that no matter how nastily “uncomfortable” a situation is you can always keep going and take even more if necessary. My critique: it was good training, very worthwhile.

I went through similar training many times after that during my 22 years in the Air Force and it didn’t come close in “miserability” (is that a word?). The AF also provided me gas chamber training but it always seemed milder, perhaps less concentrated than what I received in the marines. I could almost breathe it in like "real air," while the version of gas I received in the marine gas chamber immediately caused a violent bodily reaction. As soon as it hit the airways and eyes my respiratory system refused to have any part of it.   At the end of the letter I remark about the African, Bayi, who broke the mile track record. I loved track and field and followed all the world’s best runners, especially the milers.
-----------------------------------
- Dear Folks and anyone else reading this letter:
Urgent: I’m down to my last few stamps, send some please. We’re not due another PX call for quite a while yet.

Yesterday the platoon went down to the phone center for a call. This time I was determined to get one through. I got in line in front of the booths and waited and waited and waited. Finally it was my turn. There was only one guy in the booth in front of me. Then the DI glanced at his watch and said it was time to go. So, no phone call. That means I won’t have a chance to make one now till 3rd phase, which starts about the beginning of September. Maybe it’s better that way. I won’t get so homesick. Actually, I haven’t been homesick since around 1st phase, back in July.
Today was the big day. I went into the gas chamber and died. All those stories I heard about it didn’t come close in describing what it’s really like. When I took that mask off, the first thing I noticed was that my eyes refused to stay open for more than a fraction of a second. My skin burned and itched and my nose and throat felt even worse, like the air was on fire. We had to recite our name, rank serial number and hometown and state. All 30 of us had to do it separately before we could leave as a group. The only thing that kept me running out was the thought of having to do it again until I did it right. Most of us we’re crying like babies and actually throwing involuntary tantrums. You can’t help it. The floor was covered with spit and saliva and puke making the footing very slippery indeed. We were the last platoon of the day. I spent most of the time gagging and dry heaving. You should have heard me burp when I came out of there. My lungs refused to accept the gas, so it all went into my stomach. Oh well, it only lasted for about 5 minutes and all of us survived. Chalk it up as another unforgettable experience. And I do mean unforgettable.

After chow we double-timed about 3 miles out to a range for a weapons demonstration. We saw mortars, anti-tank weapons and other very loud things in action. It was pretty cool.

I’ve included in this letter an article and some stamps I want put in my room please. The article I took out of the LA Herald Express I found this Sunday in the squad bay. It really surprised me that Bayi’s mile record was broken so quickly and so much was taken off of it, about 1.5 seconds…Outstanding!
Love, Phil

P.S. Don’t forget those stamps. I won’t be getting any mail calls here at ITS, but keep sending them anyway. We’ll get them back at MCRD pretty soon anyway.
Posted by PhilippinesPhil at 10:58 PM

On this I can relate. For some reason I don't recall, the military had a gas tent set up on campus one day and we could go in and "try" it out. I don't know what type of gas other than "tear gas" but it was awful. Like you said, my eyes instantly became fountains and refused to stay open and my throat was on fire. Fortunately I hadn't eaten in awhile so I just gagged but others threw up. Also fortunately, my experience was probably only a minute and we weren't forced to recite anything while inside.

Question: How do you get the smell out of your clothes? I remember throwing mine away because the smell hadn't come out after two or three washings?

For the 14 months we were in training we wore the same three sets of utility fatigues, and actually only two since one was always set aside for inspections. We would hand wash all our clothes on Sunday on a concrete wash rack. We used a stiff hand brush, some WISK and lots of elbow grease. Our clothes always had a "bit" of an odor what with the constant sweating we did. A little smell from the CN gas and puke was not something we worried about I'm sure. Your such a "civilian" Ed. Just kidding.

I am a civilian and thanks to you military guys, I have the freedoms I do. I can think of a lot worse places to be a civilian.

Just dropping by to greet you a (belated)merry Christmas and a happy new year.

There's something wrong with your home page. It's sort of cut halfway and I can't view the whole page.

Hey Niceheart... Happy New Year to you too... Another blogger from California also complained that my blog was screwing up... Seems fine from my end. I guess I'm getting what I pay for, neh?