Movie Review: I AM LEGEND 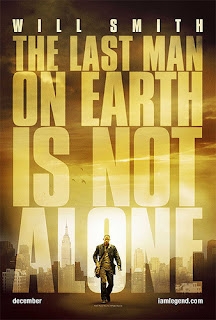 Standing in the backyard of my new place looking over my back wall past the tops of other homes beyond, I can see in the distance the very top of the rear of the nearby mall where I now go two or three times a week to see almost first run movies at it’s third floor quadplex. Ten minutes from the time I back the car out of my gate I’m munching popcorn and looking up at one of the wide silver screens.

just one thing... why did the german shepherd have to die? Wanna see this girl get all emotional? Kill a completely loyal and faithful pup. that'll do it.

Sorry but let me be a spoiler, of some sort. This movie, I Am Legend, is based on a book of the same title, which book was made into a movie much earlier, Omega Man. Starring Charlton Heston of Soylent Green fame, and of course, as Moses in the Ten Commandments.

Since I loved Omega Man, I may be predisposed not to watch this newest version. But thanks for the favorable review anyway.

That's the movies Kat. Hollywood loves to kill off the loyal dog ala Old Yeller.

You're right Amadeo; hardly anything new under the sun. When it comes to film stories, or any story for that matter, almost everything is recycled.

yeah, but the bimbo that serves no purpose in the story always lives.

Ugh. There is no justice.

Come on now Kat; stay on topic. No bimbos in I Am Legend.

But if you insist, in an "end of the world" scenario a live bimbo has a lot more uses than a live doggy, at least for most of us (guys).

Haven't yet seen the movie but it is on my Netflix que, which by the way, I pay about $1.50 per movie from the comfort of my home.

Like I said Abbey, watch this at home and turn your surround sound up. This is DEFINITELY a theater movie.