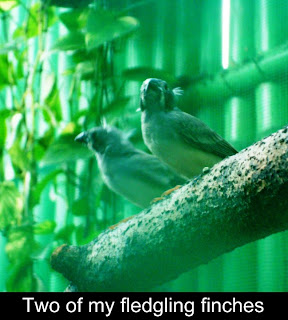 Yesterday was a good day because I got to spend most of it with my girls, but unfortunately, there was one bad moment that has lingered on and tainted the memory of the whole day. I do this a lot; become consumed with things that most people would consider minor. The first time I realized I do this was over 30 years ago when a marine staff sergeant informed me in response to my worrying about what I considered to be the sad state of his office regs, “Hey Sergeant Spear, don’t sweat the small stuff. Everything is going to be fine!”

So yesterday afternoon we had just returned from a trip to the mall where my two little ones always have a great time in the playhouse and playing their favorite games in the arcade. Back here at the house I asked the girls if they wanted to help me feed and water the finches in the big bird cage. They responded with the kind of enthusiasm that only little kids can show.

We trooped in line around the back of the house to the large green bamboo gate of the big bird cage. I let them go in first, holding one hand high to keep any birds from flying out the door. As I closed and latched the door I told them that a batch of baby finches had just left their nest for the first time a few days before.

“Daddy, there’s a bird in the water,” the 8 year old announced uncertainly.

There, floating beak down in the water was a tiny hatchling, its wings spread wide. Both my girls were hovering over the pitiful little thing.

“Daddy, what happened to it? Is it dead?”

“Yeah, it drowned. It must have fallen in.”

I had deftly scooped up the tiny body and hid its damp feathered carcass inside my cupped palm. I didn’t want them looking at the dead bird and perhaps getting upset; although, they didn’t seem the least bit affected. I know I sure was though. I felt horrible, feeling responsible.

For the last couple days I had been watching two new hatchlings try out their wings. It’s surprising how quickly they learn to expertly flit about the cage. I imagined how the little thing must have died; it must have landed in the large watering bowl by mistake and then struggled in there for who-knows-how-long before finally expiring.

I told Divine later, “Maybe I should take the deep bowl out of there until the little ones are better at flying, and just use a shallow dish to keep them watered; ya know?”

I continued to conceal the drowned fledgling in my hand for the five or ten minutes we stayed in the cage.

“What are you going to do with it Daddy?” my 5 year old asked me.

They wanted to watch me do it, but I just wanted to get it done so they wouldn’t have to dwell on its death. Thing is, I think I was the one all screwed up over it and doing all the dwelling. With the girls following me and hovering near I placed the tiny feathered corpse at the bottom of my current compost pit along the south interior wall. In no time both girls were happily running around the yard playing tag with Divine’s girls, the dead bird no longer a thing of interest.

As for me, I can’t keep it out of my mind; I still have the image of it floating forlornly there in the water.

It turns out that the dead little bird is not one of the two fledglings I’ve been watching all week. The one that drowned was a brand new hatchling that had just dropped out of one of the nests and right into the bowl of water. It was just bad luck. Poor little thing…
Posted by PhilippinesPhil at 2:06 AM

Email ThisBlogThis!Share to TwitterShare to FacebookShare to Pinterest
Labels: finches, My big bird cage, my girls

I understand why you felt the way you did and I'm sorry, sweet man. I really am. xo

No doubt, when it comes to baby animals and kids, I'm a softy.

Yeah, that sort of makes me sad.

I think we adults often assume kids can't deal well with death. But we're probably just projecting our own discomfort onto them. Your girls did just fine.

When my dad died my brother refused to take his kids to the funeral, saying it would be too much for them to handle. I told him he was wrong but it did no good. His kids needed to be part of the family's grieving process, no matter their ages.

You're right. I didn't want them to see how much I was affected. I'm not one to share; never have, at least not sorrow.

Phil, don't worry about it(I know I waste my breath KC I know U) Kids are resilient like rubber balls they bounce back from most anything and put it aside until they are older and can sympathize/empathize or what ever the proper term is. I don't know to be honest. I had the same experience when I was a child and my best friends father passed from cancer very quickly. The morning of the funeral I puked my guts out and couldn't make the ceremony(big softy[I wanted to use other word but ladies may read this])

Take heart they are happy healthy NORMAL and well adjusted children. Let them be that way as long as humanly possible because sooner or later they will have to grow up and deal with real life's problems. Revel in their youth and whatever you call it for the time being. I owe you so much for all your counsel and help.

Let them be the sweet innocent children they are for now. There is time enough in the future to teach them life's more difficult lessons(some of which they must do on their own).

And yes I check your blog every couple of days to vicariously see how you live and pray for your well being.