My Chinese Bumble-bee Gave up the Ghost 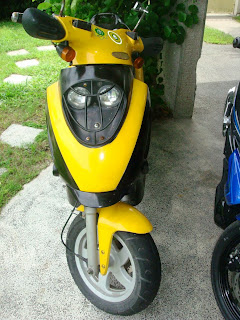 My yellow and black Chinese-made “bumble bee” finally gave up the ghost. Hoping that I could squeeze another couple months out of it, for more than a week I allowed the scooter mechanic to continue to milk me for the replacement of one new part after another. My nephew would bring it home every other afternoon, I’d give it a try, it would seem to start okay, but the next morning each time it was all starter and no engine. It was maddening.

Finally, I realized that the problem was in the thrice rebuilt engine; it had no more capacity to build compression without which it would not start when cold and unprimed. I wasn’t about to drop another penny into rebuilding it a fourth time. No, I decided it was time to cut my losses and just splurge on a brand new bike; only this time I would go Japanese. No more Chinese scooters for me; no way, no how. I’ve learned my lesson.

I was thinking about railing against Chinese products but then I began to rethink it. The problem, I believe, stems probably not so much in China as it does here in the Philippines; or perhaps it’s a combination of export and import decisions made in both China and here.

I used to puzzle over why Filipinos would ask me to bring them back products from the US. I’d respond, “You DO realize that virtually all the stuff you want me to get for you are also made in China, just like the stuff you buy here?”

But then I “got it;” the real issue is quality—virtually everything sold here, although generally more costly than back home, is decidedly substandard. I’ve decided there are likely two reasons for this:

First, Americans and other types of First World consumers won’t put up with a company that attempts to foist crappy stuff on them, and equally important, Chinese companies logically do not want to risk the very real wrath of the “mighty American consumer.”

In contrast, in these parts, neither Chinese exporters nor Filipino retailers have much reason to worry about consumer backlash—it appears to be nonexistent here. As far as I can see, there is no consumer advocacy to speak of. People just put up with the junk palmed off on them in stores and simply do what folks do here—accept and suck it up. Or, they find a way to get someone to bring back “the good stuff” from someplace else. Just try and return a faulty item bought in any store over here and prepare to experience the mother of all run-arounds. It’ll boggle your mind. 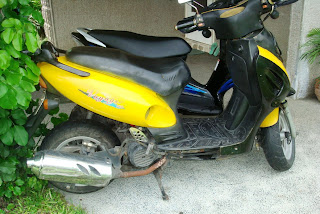 Although, my theory does not hold water when it comes to Japanese products. Most Japanese brand scooters sold here are not built in Japan, but in places like Thailand or Taiwan; yet, pretty much any of those products are far superior to anything made in China. Of course you pay BIG for that quality.

I know now that I should have bought Japanese right from the start. In the long run I would have saved big time. To demonstrate my point, a buddy bought a Yamaha Nouvo about the same time I did 5 or 6 years ago. I put down about $700 for my Chinese scoot while he probably paid double that for his Japanese banger. Within 3 months though, mine began to break down; and once it started to find ways to fail it was downhill from there.

The phrase “high maintenance” definitely applied to my Chinese beater. Thing is, once you start feeding the meter you have no choice but to keep dropping in the coins; either that or park the beast and walk. At first I used to live by the adage “it’s cheaper to keep her,” but after a couple years of “her” always breaking down I began to dream of a new more reliable Japanese “mistress” and yes, thoughts of “divorce” began to intrude. Yes, I wanted to “cheat” on my yellow baby and even replace her. What can I say?

After going on 6 years of regular trips to “the shop” I can honestly say that I paid at least two or three times the original price in keeping that two wheeled piece of Chinese junk on the street. Quite the opposite, my buddy still has his Nouvo, and it still runs like a top. The only money he’s spent on maintenance is for the occasional oil change. More important, he’s had scooterized transportation all these years that never fails to start and always runs perfectly. It’s true, dependability is even MORE important than cost; THAT is the lesson here. 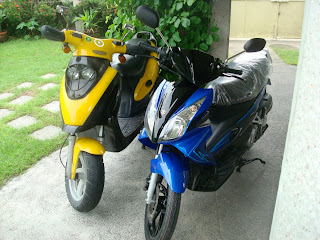 So, my new scooter is a Suzuki Hayate, a fairly high-end bike made in Thailand. I’ve had it for over a week now and I would LOVE to be able to start enjoying it out on the road, but that’s not how things work in this country. Nope, you buy a new vehicle and park it for about a month or more until the plates are issued. They don’t have dealer plates, or temporary issue plates, or any kind of plates that would make it legal to ride.

You will see folks from here all the time riding their new bikes on the street with “For Registration” on a card where the plate is supposed to be. Way back when, I thought that must have been what they use here for temporary plates; but no, I learned the hard way that THAT is definitely not true. If a cop pulls you over and you have no plate you will probably have to convince him to NOT confiscate your new vehicle.

That’s what happened to me when I bought the bumble-bee back in 2004. I showed the policeman my sales slip, which he dutifully read along with my driver’s license just before he informed me that he had no choice but to take my scooter into custody. Naturally, I was shocked when he did exactly that. I called my wife at the time and she came out to the station breathing flames. After dealing with her noise for a few minutes the station chief allowed me to ride it home as long as I parked it until the plates arrived.

I’ve mentioned to several locals that I have a brand new scooter and they are actually puzzled that I don’t ride it while I’m waiting for the plates. I tell them why and typically they shake their heads like I’m nuts. One said, “If you see the police ahead, just stop and turn around…” 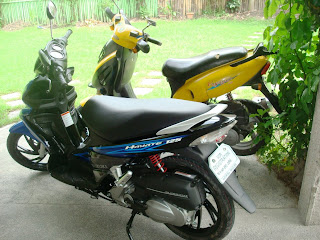 You know, the longer I’m here the more I realize how huge the cultural shift is between foreign nationals like me and locals when it comes to attitudes toward rules and regulations.
Posted by PhilippinesPhil at 2:45 PM

Email ThisBlogThis!Share to TwitterShare to FacebookShare to Pinterest
Labels: scooter

Americans and other types of First World consumers won’t put up with a company that attempts to foist crappy stuff on them...

You've been away too long. We do. It is called Wal-Mart.

Heh heh. Your hatred of Wally World has rotted your guts Ed.

As bad as the stuff is there its still heads and shoulders higher in quality than what you can buy here; and they take it back and refund you if their crap implodes when you get it home.

And better yet, you have alternatives to Wally Mart that we don't have here (like buying online). There are virtually NO choices here. You probably stopped reading my post as soon as you got to that one spot; you stopped, wrote your comment, and missed the rest of the post, didn't ya?

So a Suzuki it is. My local research also pointed me to a Suzuki, compared with the other popular brands such as Honda, Yamaha, and Kawasaki. A Suzuki is comparatively cheaper in Cagayan de Oro, but the market is for motorbikes not scooters.

Two established Chinese brands are having difficulties breaking into the local public-utility market there. The consumers do not trust their durability and dependability, and power.

But I prefer their shapes and designs. Remind me of the cycles of the 60's. Have already prepared the wife of my desire to get one when I get back there.

And you are right about spare parts being used there. Chinese made parts are at the bottom of the usage chain because of their quality.

Replacement parts aren't even an issue when they don't break in the first place, right?

I did read the whole thing before commenting but I still had to make that comment. Having been over there, I know I would be thankful for a Wal-Mart on the corner.

But, Phil, remember even ordinary wear and tear will necessitate the use of replacement parts.

Over the course of the 5 plus years of my Chinese bike, it needed replacement parts on average once every 2 or 3 months. My buddy’s Japanese bike has NEVER needed even one replacement part over the same period. Enough said.

Had a lot to catch up on. Nice scooter. Sorry about the employee trouble, but I'd be a zero tolerance kind of gal, too. With kids in the house and personal safety there are no second chances.