We amble up the coastal walk...photos! 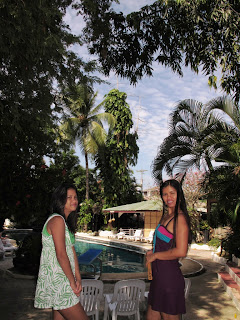 All my girls have made the trip to Puerto Galera with their mom and I. The one who goes most often though is the youngest; SHE is the fun one still. Her two older sisters tend to be sticks in the mud by comparison, always texting or just sitting in the room. She’ll be 13 soon—I hope she doesn’t suddenly turn into her older sisters, more interested in socializing on Facebook and cell phones than swimming with her dad. 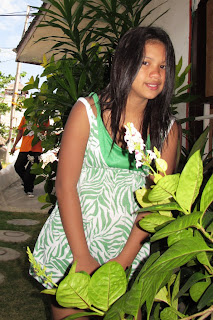 And, unlike her older siblings, she is ready at the drop of a hat to go anywhere we go and do anything we do, especially whatever it is I AM DOING. If I'm climbing a steep jungle covered hill, she's right behind me. If I'm snorkeling deep choppy waters, she's right there too. 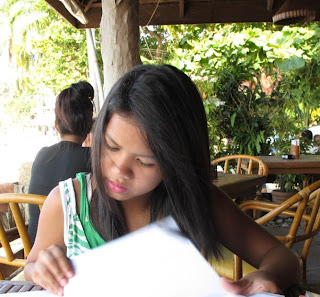 She would have loved to go out and scuba with me, and now I'm thinking to take her back with us and have the Big Apple get her trained up so she can. She takes to the water like a fish anyway, and fears nothing, so why not? 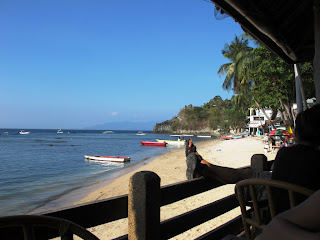 During the five days we stayed in Sabang, in the afternoons after my last dive of the day, she, her mom and I would stroll around the tiny resort village taking in the sights and stopping in at various seaside cafes and restaurants to check out the coffee and ambience of each. 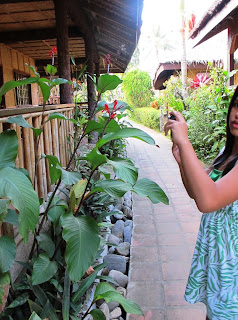 I always carry my Canon looking to snap shots of everything that catches my eye. Naturally, my girl wants to do the same thing. Like I said, if I'm doing it, SHE wants to as well. I've got her snapping photos with my little Sony Cybershot. 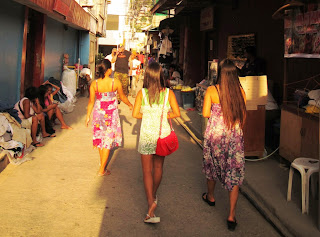 Including my wife and stepdaughter in my pics is always a favorite photo subject of mine. For me, without people I know in the shots, the photos just don't have the same interest when I view them later. 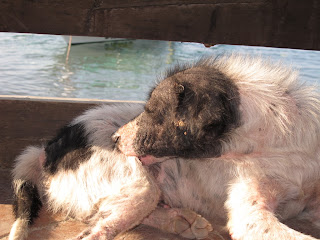 This is one of those "only in the Philippines" shots. We were having some coffee and snacks at a place called Eddie's, when this mangy dog trotted in and decided to relax next to my feet as if nothing was out of the ordinary. Fine by me as long as he didn't get TOO close. No one paid the pathetic creature any mind at all, except for me as I pestered it with several flashes from my camera. 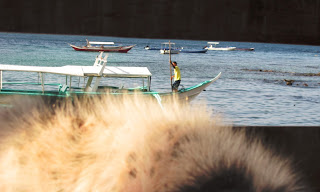 Using my mangy dog neighbor to frame this shot of the boats moored in the cove outside of the restaurant was a kind of whimsical thing to do I think. I mean who DOES that? ME! 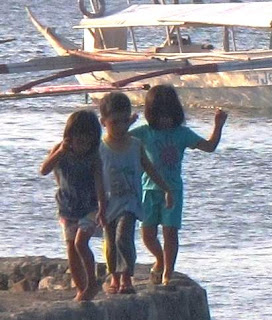 These three little kids were playing on the edge of the still unfinished Sabang Pier. It always amazes me how kids are left to their own devices like this. I'm sure they were perfectly safe, but still... 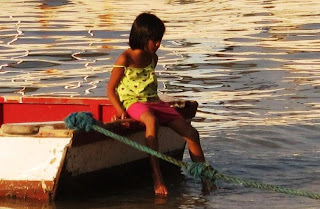 This little girl having a pensive moment sitting on the stern of one of the numerous resort dive boats was also taken from Eddie's. It's a good spot for photo taking, opportunties at every turn of the head. 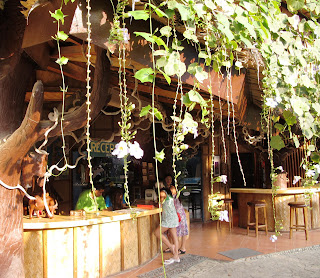 On this particular afternoon, from Eddie's we ambled east up the coastal walk. Noticing an enticingly tropical entrance to a hotel called "The Garden of Eden," we decided to check it out. Here the girls are asking the desk clerk about room rates, which, we learned, are considerably higher than Big Apples'. Still, they aren't THAT bad. The place is SO gorgeous that we may just give it a try one of these days. 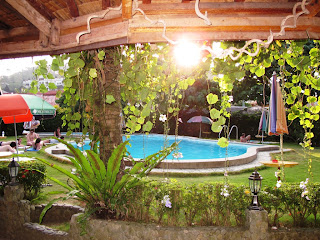 The Garden of Eden's pool and garden. It seemed to me that most of the customers frequenting this place are Europeans. I say that since almost all the men lounging around its pool were sporting speedos. Ugh. 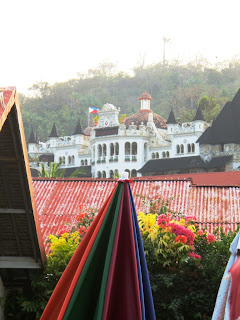 The Tropicana Hotel, easily the loftiest resort in Sabang, makes for a pretty backdrop above the Garden of Eden's pool. 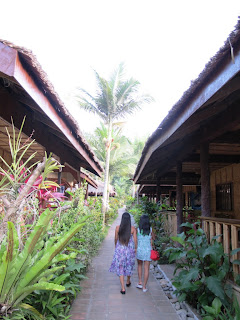 My girl and I took dozens of photos of the myriad flowering plants on beautiful display along the long promenade that passes through the length of the Eden resort, probably well over a hundred meters long, all the way up the hill to bungalow rooms with a hillside view. 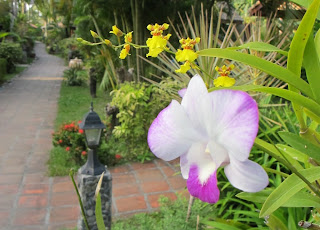 Orchids, lilies, flowering tropical plants of every imaginable ilk line the long walkway in The Garden of Eden. Whatever they are paying the gardener, he deserves more. 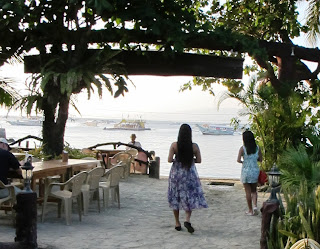 The girls passing through Eden's restaurant and bar patio on the way back out to the coastal sidewalk to continue our early evening stroll. 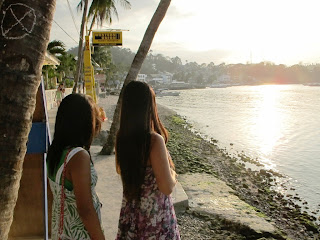 Looking back over their shoulders into the setting sun at the sweeping curve of the Sabang coastline. 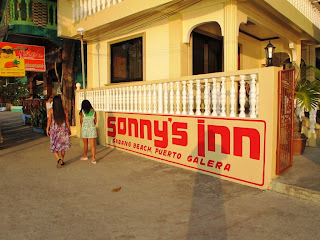 The waterside entrance to Sonny's Inn, one of the many resort hotels that front the cove of Sabang. 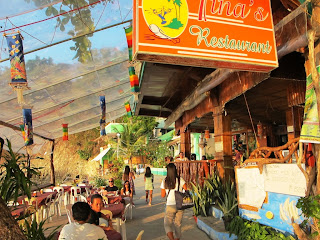 Tina's, this hotel is just about to the end of the beach side walk, which passes right through the middle of it's restaurant seating. 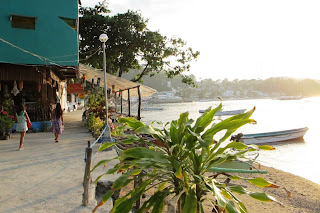 Doing a U-turn at the end of the sidewalk, here we are about to walk back through Tina's on our return back up the coast from where we started. 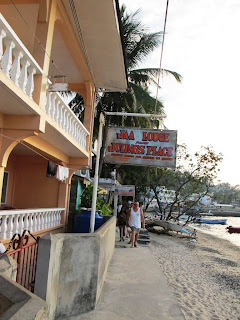 Almost back to Eddie's, the concrete sidewalk turns narrow as it passes by the JAA Lodge, a rather unattractive name for a resort hotel if ever I heard one. 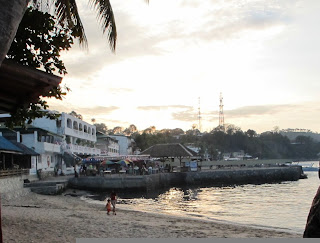 I realize that the town probably really needs this new pier, which is STILL not completed after almost a year of construction, but unfortunately it really destroys the beauty of that part of the cove's coast.

The next day we moved to the other side of the peninsula to the Sinandigan Lodge not far from the place we used to stay at, The Coral Cove Resort, before that sad sack place finally closed due to legal disputes a few months ago. We stayed over there for the rest of the trip where I put my new diving skills to use on that side of the peninsula.
Posted by PhilippinesPhil at 11:23 PM