The Detroit Tigers and Me…. 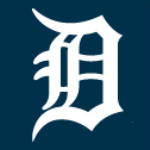 There was a time when I was quite angry with the baseball Tigers of Detroit, but not anymore. Most folks don’t even remember the decision they made as a team in 1990 that caused me to turn my back on them. But before 1990, the year I forever lost interest in them, I lived and breathed Tiger baseball. From the time I was a kid in the 60’s, baseball to me meant the Tigers. I was born in and lived in many places until my dad retired from the military in 1971; but my parents are Michiganders, therefore, by default, I was one too. I was a Tigers fan jus sanguinis.

In 1968, before the era of big TV revenue and night games, baseball was mostly played in the day. I was in the 6th grade in and I remember following the World Series mostly surreptitiously via transistor radio. The only games I was able to watch on TV were those played on the weekend, but the deciding final games were all played during the week while I was trapped in school. I could hardly concentrate in class—all that mattered to me was the Tigers! 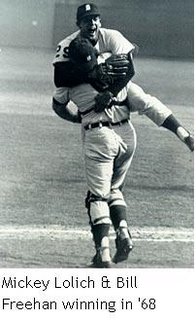 By the way in 1968, Mickey Lolich and the Tigers beat Bob Gibson and the Cardinals to take the series in 7. My brother was just telling me that his first memory of baseball was coming home in the afternoon from school and I was already there with the black &amp; white on; we celebrated as Bill Freehan caught a popup for the last out to win the series. Strange, I don't remember that. I'm jealous; I mean he's 4 years younger than me! Why does he have that memory and I don't!? Damn it....

In the winter of 1974 I was rewarded by the Saginaw News for my performance as a newspaper boy. All of the most successful paperboys were honored at a banquet at the famous Bavarian Inn Restaurant in the town of , . “The Voice of the Tigers,” Ernie Harwell, only 55 at the time, was the guest speaker and enamored us with his experiences as an announcer, including many stories about our beloved Tigers. He showed us a baseball signed by most of the members of the 1973 team and declared that one of us would become its new owner that night. I didn’t even hope to think that it might be me, and promptly forgot about it. At the end of his speech he took the banquet program and announced that he would drop his pen, point first, onto the list of our names, and whoever it landed upon would get 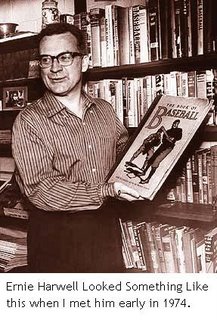 the ball. He dropped his pen, picked up the program, closely examined it, looked up and called MY name! My dad was with me and when I returned to my seat with precious ball in hand, I don’t think I’ve ever seen him more excited or with a bigger smile on his face. It’s possible that he was more excited than I was. Ernie Harwell, now 88, is the MAN!

In 1984, my Tigers came roaring out of the box; they won and kept on winning. Kirk Gibson and crew were unstoppable, and everyone knew from the All Star Break on that it was their year. Sure enough, they easily swept through the season and took the Series without breaking a sweat. It wasn’t even close. The hapless San Diego Padres never had a chance.

In August of 1990 I deployed to the Saudi peninsula as part of the allied Gulf War effort against Saddam Hussein. By mid-September my unit was fortunate enough to be hooked up with satellite-fed TV and we watched baseball with great interest. The Tigers were in 3rd place and close to contention, but that year the real September show in was Cecil Fielder. The big man smacked homer after homer and we thought he might go for Maris’ r 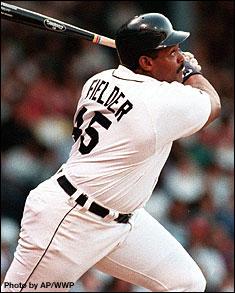 Anytime we had a break between our 12 hour shifts we would head over to the big TV “hooch” to check out the baseball games. We were thrilled to see that all the teams of Major League Baseball (MLB) wore black armbands to show their support and respect for those of us serving away from home in the war. But there was one exception—The Detroit Tigers! I couldn’t believe it. I was disappointed, angry and felt betrayed. How could MY team be the ONLY one to turn their collective backs on me?

The story from the Tigers is that a single player decided that he would not wear the armband. This lone player was the second baseman, Lou Whittaker. I don’t know what his bag was, whether he was against war in general, or if he was just trying to emulate Muhammad Ali; regardless, he turned his back on me and others like me, and took the rest of the team with him. Out of deference to their teammate, the entire team opted to not wear the armband. In turn, I “opted” to no longer be a Tiger’s baseball fan. For many years, as long as a single 1990 Tiger still played, I actively and savagely rooted against them. I was even happy to see them lose to the Yankees!

Interestingly, I googled the hell out of this subject and found absolutely nothing on this sad matter. It’s as if it never happened. I know I didn’t imagine it, but it seems no one

else remembers it at all. Such a petty thing to get upset over some would say, but it meant a lot to me and if it happened again today, I’d be just as upset.

More than 15 years have passed since “I lost my baseball religion,” and although I am no longer angry with the Tigers, I never came back to following or caring about them. Even presently, after having relentlessly mowed down the Yankees, a team I truly detest, and now in the midst of their destruction of the Athletics, I am still not a fan. I guess once you lose “the love” you cannot recapture it.

All the players from 15 years ago are gone now, and I hold nothing against the current team, but regrettably, for me, the damage is done. If they go all the way and take the World Championship I’ll be watching ONLY as a baseball fan, NOT as a Detroit Tigers fan. Although, I must admit that my most prized possession is STILL that baseball signed by the ’73 Tig’s given to me with a handshake and a hearty congratulations by Ernie Harwell. After all, I’ll never stop loving the OLD Tigers, those early teams that existed before THEY stopped loving me. 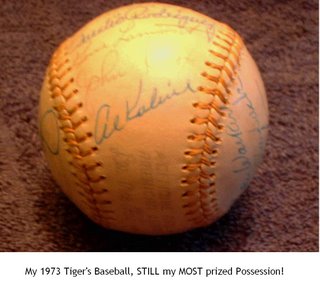 Posted by PhilippinesPhil at 1:08 PM

Pretty sad when politics and ideology get entangled into sports. Since Whittaker is no longer with the Tigs, I guess you can love them again.

Same thing happened to Carlos Delgado who didn't want to stand up when God Bless America is being sung at every 7th inning in the Yankee Stadium. Being from Puerto Rico which is a US Trust Territory, he's not approving of the war in Iraq. Yankee fans booed him everytime he gest to the plate. He was written off by the Yankee organization as a prospect after the incident but strangely, he signed up with the NY Mets! I guess the Mets fans forgave him when his bats started popping up the HRs.

I can "love" them again? Fat chance.... I've long since moved on. Some cuts are too deep.

If there is a place that someone could get away with what Delgado is doing it would be in the northeast--that's Bush hating country big time... I have to give the Yankees fans some respect for jumping on Delgado though, because love of country is more than disagreement over Iraq; I guess Mets fans are so hungry for another season like 86 that they'd cheer Bin Laden if he could pitch them into a championship.

The ball is the coolest, just because he signed it. Greatest Tiger ever. Don't talk about Cobb. Kaline.

Hi Phil.... enjoying your blog! Wondering tho just how much your prized Possession '73 Tigers' ball is nowadays. Hey, life is too short forgive them Tigers'. They could go all the way Phil.My prediction? Tigers' in 6!Yup, my beloved Yankees lost...but they'll be back. I'll try to see Puerto Galera when we go home for a visit next year. Maybe we can meet up for lunch/SanMig at the Swagman Hotel someday on our way up to my birthplace Baguio City. Meantime....keep blogging.

Kev, I agree...Cobb was a bully, a jerk! Kaline played for the Tigers his entire career, a class act, a gentleman, a Hall of Famer...

Joel, I'm sure my signed baseball is worth a few hundred dollars, but I'll never know for sure. It's worth more to me than what anyone would pay me for it. (I don't know, someone make me an offer! chuckle) I said I no longer hold a grudge against the current team; I just don't care about them. What, I'm supposed to like them again because they are winning? Yeah right... You're quite the shallow fellow Joel! grin... Let me know when you're in town we'll hook up...

And yes, Tigers fever is catching on in Detroit suburbs, Waterford.

Shopped at Sam's Club yesterday morning and several staff members were busy setting up tables for Tigers tees, caps, and yes, even huge cakes (for celebration?).

When asked by one staff member, I passed and said I'd wait till they win the World Series. HeHehe.

I should have added that they got there trouncing one of our California teams, the A's.

Amadeo, now hear this... I don't care! The point of my story is.... remember? (chuckle) I definitely do NOT have Tiger fever. As far as I'm concerned they did their job when they ended the Yankees' post season (grin!)

BTW, drove north via I-75 all to way to Birch Run, now home to a huge complex of discount stores.

Another big story here is also the plane crash of Yankee pitcher Lidle right after they lost to the Tigers.

When we were watching the 3rd game here, the only loud cheerer for the A's was the wife.

Not because she is a fan, she is not even familiar with any of the players, but because if the series had gone further, say, like the 7th game, then one of my sons in the Oakland PD would likely have been able to secure some free tickets. HeHeHe.

Soooo, you're saying the Oakland PD is JUST like the PNP? Perish the thought! chuckle....

I understand that one of the "enticements" to have police officers do extra duties during home games is to distribute among them unsold tickets. BTW, the stadium owners pay for the services of the officers assigned to them.

Suuuure Amadeo, that's the story and their sticking TO it! grin...