I settled in last night to watch some TV and decided to watch the Filipino HBO premiere of the Nicole Kidman, Wil Ferrel 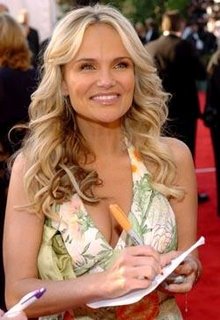 cinematic version of “Bewitched.” I knew it to be a “fluff” movie, a light comedic affair; but my interest suddenly perked during the opening credits when I saw that Kristin Chenoweth is in it. After all, I KNOW Kristin.

The scene: Just outside one of the domestic terminals at LAX.

A squadron mate, a flight navigator with the rank of major, and I, “an enlisted avionics maintenance puke,” had just finished a week at Edwards Air Force Base toiling as Air Force operational testers for Air Mobility Command. We had arrived at the airport many hours before our flight knowing that airport security was going to be a perplexing painfully-protracted production, which indeed it was turning out to be. Terminal check-in was so full of switch-backing lines of travelers that most of us were queued up for hundreds of yards on the outside sidewalks. We couldn't even get in to the building. I prayed that it wouldn't rain. The sole of my left foot was still tender from surgery in late August, so after just a few minutes of standing I was feeling painfully uncomfortable.

Desperate to get my mind off my throbbing foot, I checked out the roiling mass of confusion around me. In line behind us were two beautiful women, a short blond and a taller brunette, both wore stylish sunglasses. I nodded to the little one, her ash-blonde hair pulled tightly into a ponytail; the tail drawn through the backend of a cute baseball cap, and attempted small talk. Shyly, I remarked to her, “What a mess huh?”

Surprisingly, she smiled dazzlingly and actually spoke back to me with a slight Midwestern draw, “It sure is; looks like we are in for quite a wait just to get inside the terminal.”

In no time at all, the four of us were chatting and laughing like old friends. Introducing ourselves to the two Hollywood-looking ladies with their darkened glasses and casual blue-jeaned elegance, we exchanged handshakes and names. I admit that at the time I had never heard of Kristin, but as we continued to converse, I asked the girls what they “did.” I knew that the tall dark-haired woman looked to be Kristin’s assistant, or some kind of helper from her deference and the way they talked together. With just a few minutes of chat between us, I already felt at ease enough with them to ask, “So Kristin, are you in show business or something?”

She smiled and answered modestly, “Oh yes, I sing and act on Broadway out east, and do some acting on television out here as well. Actually, we’re heading back to my place in now that my TV show just got cancelled.”

“Excuse me. What?” I couldn’t believe what I was hearing. Was she pulling my leg? In disbelief, my words fairly tumbling out of mouth, I gushed, “Are you kidding me? What did you say your name is again? Wait, did you say you sing and act ON Broadway? You’re not talking about OFF Broadway, are you? And you HAD a TV show! Wow!”

Now her assistant chimed in chuckling, “She sure does. She’s done several things on Broadway; she won a Tony a couple years ago forYou’re a Good Man Charlie Brown.” She said this very nonchalantly, as if none of it was any big deal whatsoever.

My mouth hung open to my chest; I turned to the taller woman’s diminutive companion with new respect and awe in my voice. “Kristin, YOU have a TONY! Oh my God! Get out of here! That’s unbelievable! Dang…sorry I don’t know you, but may I have your autograph… please?”

She laughed delighted and answered good-naturedly, “Of course you may!” She turned to her assistant who gave her a pen and a sheet of paper from a planner. “I’ll give you my email address too if you’d like.”

Kristin was completely unassuming, a real person, and genuinely interested in us. She wanted to know what we did in the Air Force, and listened carefully as we explained the technical aspects of aircraft systems testing. She even asked a few questions, which we gladly answered in full.

The line continued to move slowly towards the terminal doors, but now I no longer paid any mind to the pain in my feet. I was completely caught up in our continuing conversation. We picked up our bags or kicked them forward a few inches, talked about making TV shows and movies, Broadway plays and musicals, living the bi-coastal life, and about our life and work in the Air Force. I’m not sure how long we talked, but it was for much longer than an hour. Our enjoyable little chance get-together finally came to an end when an airline representative came along the line and called out their flight number; so off they went, but before leaving, Kristin and her assistant wished us well, shook our hands, and looking over their shoulders waved so long.

Kristin Chenoweth is not a superstar like Nicole Kidman or Jude Law, but she’s been in a lot of TV shows, movies and Broadway productions. What a treat it was to meet such a sincerely sweet person from the entertainment industry. She seemed like a nice girl from a small town to me. I hope her career continues to progress well. A nice person like her deserves all the best.

Watching her in “Bewitched” made the movie all the more fun and enjoyable to watch. It was like seeing a friend or a family member perform, which after our short meeting in 2001 I certainly now consider her to be. Since meeting her that day outside the terminal of LAX, I watch for her and go out of my way to watch all her performances. Last year, I saw her perform at the Tony Awards Show and realized that THAT girl can sing too. She’s a little woman with a BIG voice.

Kristin Chenoweth—if you don’t know who she is, or never heard of her, take notice and watch for her. If you were to ever bump into her at an airport or a restaurant like I did, I’m sure you would love her just as much as I do—you too will be a fan for life. 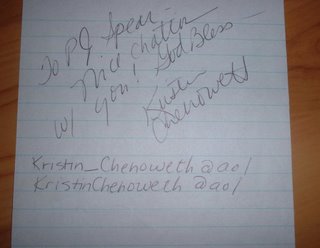 Posted by PhilippinesPhil at 2:38 AM

I've never heard of Kristin Chenoweth. She seems nice, though - not at all arrogant despite her success.

I once met Wil Wheaton, who was an actor in Star Trek:The Next Generation. He seemed like a normal guy.

Most actors have to endure many auditions, rejections and hardship before finding success - perhaps that's why some are humble.

Hi aurea, well now that you've seen Kristin's name, believe me, you'll be noticing it everywhere; funny how that works...

I've never seen any of her movies yet but I saw her made a guest appearance on the Martha Stewart show. It was funny because she had to stand on this foot stool because the kitchen table was too high for her. I've heard her sing and yes she can sing.

Hi Nice, I just realized that I've written a "chick" post. But you know what? I STILL like it!

I guess the only "star" that I have met was Charlton Heston. I rode in a limo from the airport to his speaking engagement for the NRA. I wasn't really impressed with him as a person outside of the movies. Other than that, the closest I can come is knowing two of the roadies for ZZTop.

Oh, and this one just came to me. I attended a day long writing seminar with six other people presided over by Garrison Keiller. Being a conservative Phil, you probably don't listen to him much or haven't gone to see his new movie out in theaters right now. ;)

Ed, Roadies! What jerks... I volunteered to help set up and tear down an Alice Cooper concert at a Six Flags in New Jersey. His roadies were the biggest bunch of dipwads I've ever met... It felt good telling them to go take a flying Philly foofoo!

Of course I know of Kieler...downhome story teller from Minnesotta. Why would be conservative preclude me from knowing someone like him? As far as seeing his movie, I haven't seen anyone's movie unless it comes out soon on cable. Why pay for HBO if I've already seen the shows in the theater? I'm a cheap bastard, neh?

Sidney, go ahead and try the email addresses. I'm sure if they are still active she will reply... a wedding huh? Hmmm, i definitely would have married up.

Hey, Phil. I forgot to mention that I wrote about Kristin's guest appearance on the Martha show on my blog. And guess what? I don't know if it's actually her but she came across that post just today and left a comment. You can check it out at this link: http://niceheart.wordpress.com/2006/05/15/kitchens-are-not-built-for-short-people/

How about that Nice! Now we have BOTH learned on a personal level that Kristin is just like the rest of us, a normal down-to-earth person. I wish all stars were as humble and approachable.

I'm still catching up on your interesting posts :-). I think I've seen Kristin in some movies. And it's good to know being in the limelight didn't get to her head.

It's always nice to know about famous people who interact with us "ordinary guys" without batting an eyelash.

Yeah Wat, I had never heard of her UNTIL I met her, then I saw her everywhere. Funny how that works, eh?

Wow! You met THE Kristin Chenoweth!?! She's one of my fave actress and singer! i love her on Wicked! awww... huhu.. :( so jealous of you! anyway..thanks for this blog. :)

Ariane, I did not know who she was when I met her but I became an immediate fan. You'll be happy to know that she is as sweet and nice in real life as she seems in the parts she plays. And you are welcome!

i've always wanted to meet her. good thing you met her! :)