In this letter I decided to send a personal note to each of my three siblings. THE most difficult part of the training, Mess Duty, was almost behind me. In the next day or so, our two weeks of rifle training would begin. After that, two weeks of infantry training awaited. And finally, we'd head back south to San Diego for the homestretch to graduation.

I was struck with irony when I read my message to my sister, where I told her I planned on being on an airplane for home less than an hour from the moment I graduated. It didn’t exactly work out that way…in fact; it worked out horribly opposite to that scenario. Check out that “Airplane” story at the end of this installment of “letters from bootcamp.”

I’m not doing too badly now. The days and weeks are beginning to move faster it seems. Although that’s okay with me, I’m sure you don’t like that considering school starts in only 30 some odd days.

Congratulations! It feels pretty good being on a championship team doesn’t it? Too bad about Burt though. By the score though, you guys put up a pretty good battle.

I got all your letters so far; keep writing them. I look forward to hearing from everyone.

I can’t believe the people I’m getting letters from. So far I’ve got one from Terry and one from Jean Martin. What are the 4 movies you’ve seen since I left? That’s the one activity I feel most deprived of. How much have you saved up now from your job? It’s nice to hear you’re working regularly again.

When I graduate I plan to be on a plane for home between ½ to a full hour after it’s all over. The airport is right next to M.C.R.D. Mark’s doing fine and he said “Hi!” Take a few of the family so I know what everyone looks like these days. Too bad Dad’s always grumpy. Dad, you behave yourself!

If I know you, you haven’t been working on your running. Don’t put it off. Make yourself do it or you’ll find Cross-Country season has arrived before you know it and you won’t be ready. This year, when they have the Haley reunion why don’t you run out to it? It’s a good way to get in shape and impress a few people while you’re at it. Aside from that, coke and cake and ice-cream and Jello will all taste a lot better when you have to run the 7 or 8 miles to get out there.

How much was your profit (from your newspaper route) for July? How’s my old route doing? Are you keeping Gail (our sister) on the job?

You’ve only sent 1 or 2 letters. Next time your get a chance, and soon, answer this one. I’m sitting on the edge of my footlocker, literally, waiting for an answer.

Love to all of you,

P.S. I’m returning the cutout (newspaper clipping) of Dawson (now Mr. & Mrs.) in this letter. Save it for me. Send some more interesting cutouts. (clippings)

I had every intention of being on an airplane back to just as soon as humanly possible after the graduation ceremony when that wonderful day at long last arrived after the third week of September. A line of buses waited to take us the short distance to the terminal. Seeing them parked just off to the side was comforting. After months of watching “freedom birds” take off continuously overhead from just over the fence, I knew I was soon going to be riding one home. 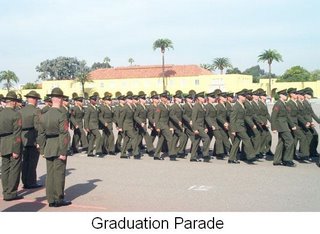 31 years later, I remember plainly our platoon commander, SSgt Trevino, awaiting his turn to dismiss us for the last time after having taken us through our graduation paces, the most important part being the pass-in-review parade along with our three sister platoons. As platoon 1075 began cheering themselves hoarse, Trevino came to attention in front of us, snapping his ceremonial sword sharply up next to his side, the point coming to rest just to the side of his head. Dressed smartly in our full “class A” greens we listened expectantly for his last order ever to us. When he delivered it, boomed out loudly with Latino flair, we practically exploded with joy:

In unison, all 78 of us responded at the top of our lungs, “Aye-Aye Sir!” We took two steps back, first with the left foot, then together with the right one, performed about-face, drew in huge breaths and together we yelled out a hardy, “AuuuRAH!” We screamed our jubilance, snatching the barracks covers from our heads and throwing them high into the air where they formed a fleeting flock of green saucer-shaped caps. One platoon after another did this until all four platoons had been dismissed.

Those of us in a hurry to catch flights allowed ourselves a few moments to congratulate each other. After three decades, other than the two guys from my hometown who went through it with me, I never saw any of my platoon mates from bootcamp ever again. My two high school buddies and I hurried over to our bus; we scrambled aboard with several other newly minted marines, all of us carrying our “seabags” and “ditty bags.” (A seabag is what marines call a duffel bag and a ditty bag is a gym bag). I looked out the bus window and watched most of the platoon gather round and shake the hands of our erstwhile DIs, something that I had no stomach for whatsoever.

The airport was just a few minutes drive away and in no time we checked in our seabags at the counters and received our boarding passes. Mark and I strutted proudly down the concourse to where our plane waited to take us back home to . A lot has changed in our airports since 1975, and back then Hari-Krishna’s were allowed to harass people right up to the gate entrances. I had never seen one before and a pretty girl approached giving me a “free” book about her religion. Not being wise to the ways of the world back then, I took it, offering a “thank you” and feeling woozy at being so close to such a pretty thing after more than three months of not seeing any women at all. I figured I could read it on the plane, which was due to take off in about 15 minutes. Knowing our flight was about to go, Mark spoke to hurry me along, “Come on Phil, our plane!”

I turned to walk off and absentmindedly placed my ticket and boarding pass in my new book. The pretty gal spoke sweetly and pleadingly about then, “Sir, could you perhaps make a donation just to cover our costs?”

I should have tossed the book back at her, instead, being a nice young STUPID fellow, I said, “Okay, is ten bucks enough?”

Now Mark was beside himself. “Come on man!”

Hold this for me Mark.” I handed him the book, forgetting that my ticket was in it.

“Okay man, I’ll see you on the plane!” Mark grabbed the book and that was the last time I saw him AND my ticket.

I gave the pretty gal with her sweet face, long brown hair and flowing garb a twenty and hurried down the concourse after Mark, who was long gone by that time. I went up to the counter and began searching futilely for my ticket in all my pockets. With panic setting in I picked up my ditty bag with "USMC" printed in bright yellow letters across its side and searched through it too, all to no avail.

The doors were about to close and I did NOT have my damn ticket! I could feel my face turn beat red while perspiration popped out of every pore. Suddenly, my tie was way too tight. I ran back down the concourse for several hundred feet thinking I must have dropped my ticket, didn’t see it anywhere, and then ran back to the gate counter. By this time the doors were closed and the plane was running engines. My voice flustered and tense, I tried to explain to the airline lady that I could not find my ticket, but I was supposed to be on THAT airplane! She was sympathetic, but said there was nothing she could do; it was too late.

So, instead of catching the first possible flight back home it took an extra half-day to straighten out the mystery of the lost ticket. Mark found it in-flight and realized to his dismay that I hadn’t made the flight because he had my ticket. He informed a stewardess and they radioed back to confirm the location of my ticket. To their credit, the airline people, and I don’t remember which airline it was, set me up on the next available open flight. Just the same, it sure wasn’t a very auspicious start for a young guy trying to make his way in the world on his own for the first time. I felt like a complete goober.

To this day, whenever I watch the 1980 movie “Airplane,” I cheer when Robert Stack’s character kung fu’s the crap out of the horde of aggravating Hari-Krishnas. “Give ‘em hell Stryker!”

Posted by PhilippinesPhil at 1:40 AM

I'm too young to remember the Hare Krishnas, but I've since heard plenty.

When it comes to flying, I'm almost obcessive compulsive about my ticket and never let it leave my sight. I almost sleep with it the night before just to make sure I don't forget it.

After 27 years of Uncle Sam flying me around on literally hundreds of commercial flights, never mind the military ones, I never lost or misplaced another ticket, or passport, or bag, or anything. However, the airlines averaged losing my luggage on the order of about 1 in 10 flights. Yes, that many! More times than I can remember. Luckily they never lost anything permanently.

Just guessing that I've flown on around 50 different flights, many of which are multi-leg journeys and I've never lost my luggage. I've had my luggage make it to my destination before me a few times but never after or not at all. My brother on the other hand, has flown probably half as much and has lost his bags enough times to tell me last Saturday (when his bags never arrived to the airport) that they pay per pound of lost luggage and he should make out pretty good this trip since all he had in his bag were his working clothes to help my parents with their harvest.

The airline gods must love you.

That or the airports could care less about my bags wrapped in duct tape and send them right on their way. I don't do it because they are falling apart but because it helps me locate my black luggage from among all the other black luggage. Besides, who would put anything valuable in a luggage held together with duct tape?

You use duct tape? About 25 years ago I started tying bright ribbon or handkerchiefs to the handles of my military duffel or A bags. I did this to distinguish my green duffel from all the hundreds of over green duffels. But your duct tape serves dual purposes eh? Smart.