Opass, a favorite Blog buddy of mine, posted a funny piece last week that he calls “Earthquake.”

Yesterday, we got together here at my place for one of our regular Sunday afternoon “speak easies,” and once again we swapped stories and opinions for almost half the day. The mark 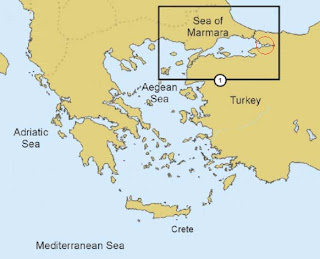 of good conversation is continuity, where one story leads to another, which leads to analysis, and then to even more stories. Opass and I didn’t talk about his Guatemala earthquake experience, although I intended to ask him about it. Just the same, I think I’ll describe now one of my own poignant earthquake memories. As I said, one good story leads to another… Well, you decide if it’s good or not…

So there I was… It was nighttime, maybe 9 or 10 p.m. I was in bed munching an apple and reading a good book. It was one of those adventure novels centering around a young male protagonist, a boy about my own age—at the time I was just 12 years old, going on 13.

My brother, 4 years younger than me, was already sound asleep across the room in his own single bed. In mine, I was on one elbow facing a dim lamp and absorbed in my reading while happily crunching away on my apple. But I stopped reading and eating when I heard something.

At first, it sounded like a horse and cart passing by outside on the cobblestone street. This quaint narrow ribbon of neatly buried cubed stones separated our building from the normally calm waters of the Bay of Izmit (once called the 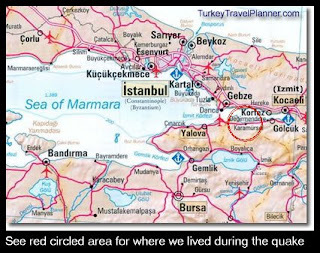 Bay of Nicomedia), an eastern arm of The Sea of Marmara. The street we lived on in the Turkish town of Karamursel was in turn protected from the sea’s waters by a break wall. It sounds charming, and indeed it was a very beautiful place to live, with a stunning view of the sea and of the green hills across the bay.

But the sound I heard, this far off rumbling noise, was not from a rolling horse cart at all. At first it was faint and distant, but in seconds it grew much louder as if a monstrously large scary vehicle was quickly and ominously approaching. I had never heard anything like it and I found it quite puzzling. Then, I began to get the picture when to go along with the rumbling sound, every object in the room began to buzz, shake, clatter and tap, depending on what object was involved in this jittering "dance of things."

I was mostly calm UNTIL assorted items like pictures, vases and flower pots began to fall over or off the wall and crash to the floor. That worsening racket coming from every room in the apartment caused my calmness to begin to collapse into a sea of panic. The rumbling from deep within the earth grew ever deafening while the sound of glass shattering and objects clattering became even more intense and alarming. To make matters worse, we lived atop a three-story apartment building. I’m sure the swaying and trembling was made much more severe by being up there.

Just after the extreme noise of breaking and falling things began, my dad threw open my bedroom door and with a wild-eyed look he yelled at me to get my brother and get downstairs, quick! That sounded like an excellent plan. As he spun around to see to my two younger sisters, Mary Kay and Gail, I set about following his orders. All semblance of physical calmness had vanished when I had seen the look of purposeful urgency on my father’s face. He was not playing around, and now, neither was I.

Immediately, I sprang out of bed and turned to my brother who was now groggily sitting up with the covers still over his legs, his eyes huge and unblinking. I went to him, shook him hard by a shoulder and yelled in his face, “Kevin, get up! Earthquake! Come on, let’s go!”

I turned and bolted for the living room, at which point we lost power and lights. Sure that my brother was right behind me, I hurried to the door leading to the stairwell and began to descend it in the dark as fast as I had ever done so, even with lights. I kept a hand on the guide rail and in no time flat I was at the ground floor landing along with most of the other apartment dwellers.

More than a dozen of us stood there on the landing just inside the wide-open double wooden doors leading to a large fenced courtyard that doubled as a parking lot. Moon and starlight provided a bare modicum of visual capability. In the blackness, we sensed more than saw each other. I heard my dad trying to account for us; I believe he was still holding my youngest sister, Gail, who was just 6 at the time.

Right about then we heard the plaintive voice of a young child. “Mommy. Mommy.”

“Mommy!” the little kid called out, sounding even more frightened than before.

Both my parents realized simultaneously that the “poor child” was Kevin, which came as quite a shock to me since I thought he was right next to me. Oops.

My dad quickly handed Gail over to my mother before springing back up the steps into the pitch-blackness above us to retrieve the last of his four progeny. I felt terrible at not accomplishing the simple task of making sure my little brother came down the stairs with me. Hell, I still feel awful about it almost 40 years later.

I remember standing there just off the bottom step, being glad that the quake had stopped, but still holding on to the railing for dear life, and waiting anxiously for my father to come back down with my brother. For the first time in my life I knew the sickening feeling of adrenalized fear, how it causes one’s knees to continuously buckle, as if tendons and ligaments down there have turned to soft pliant noodles.

On June 29, 1975, a scant six years later and me barely 18, I would flashback to that dark moment on the lightless ground floor Turkish landing, when my knees buckled exactly the same way during my first wakeup call in the Marines. The first morning wakeup experience at 3 a.m. in Marine bootcamp can be quite harrowing, as countless other marines can bear out.

Actually, I like Opass’ earthquake story much better than mine. His is amusing, and for me, funny is always better than serious. Still, it’s all I have… Except for all those worrisome aftershocks that continued to shake us up over the next few months. In many ways they were even worse than the real quake. The smaller shocks kept us on edge and it gave many of us a light case of the posttraumatic syndrome experience.

It turns out that our “big” earthquake was nothing compared to others that struck that area in the decades to come. In fact, during the big quake of 1999 hundreds of Turks died in buildings much like ours when they collapsed into mounds of debris. I’m glad I didn’t have to witness such a thing. Although, I would have had a heck of a story to tell if I had. 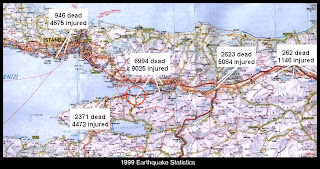 Posted by PhilippinesPhil at 2:13 AM

I've always wanted to experience natural disasters like earthquakes, tornados and hurricanes without being directly in harms way. I seen a tornado, been in a hurricane in the Philippines but have never experienced a earthquake. I need to spend more time in California.

I was stationed in N CA twice and only experienced tremblers, nothing like that doozy in Turkey. Once was enough for me...

I ought to have a number of earthquake stories too since they appear to follow me where I move to.

First, growing up in Northern Mindanao, we had the big Camiguin Island killer quake, and the island is only 50 kms from our shores. Then studying in Manila, we had the disastrous Ruby Towers quake that killed scores of people.

Then the climax in Northern California with the Loma Prieta quake. Our Daly City house straddled on top of the San Andreas fault as it meanders to the ocean, standing less than a mile away from the fault line.

I know what you mean, Phil. The fear one feels during an earthquake is waaaaay up there on the scale. In most crisis situations like fights or floods or accidents we still feel some hope of staying in control of the events. But when the very earth moves beneath our feet we lose our "grounding", our connection with what gives us stability. We don't normally even think about Mother Earth; we just count on her to be there as we take our next step. But when she's unstable it is very unnerving for us her children.

Hey! Does your bro still chide you about abandoning him up there in that darkened and otherwise abandoned building? That's a good story, and funny 40 years on.

On a more serious note however, it was a critical point in your life.
Imagine how your own life and personality and mental health would have been different if the Fates had chosen to collapse the building on your dad when he went back inside to get your brother. In your 12-year old
mindset you'd have felt responsible. Uftah!

Nope, my brother has long since forgiven me. In fact, I think he'll probably ignore this post. By now he's probably tired of hearing about it. Besides, I was a much worse brother in a lot more ways than that single incident, and he's even forgiven most of the other stuff. At least I hope so. Now, if I can just get my sister to get on board with that!

Good point. I was horrified that he had to go back up into the blackness. I forget even now how frightening that was back then. What a relief when they both came down safely. You're right, life changed as I knew it from that point on. Nothing was ever the same.