Part 4 of "Broken and in Pieces" in Angeles City

My friend’s leg is coming along slowly; for him, this last 10 days has been the longest year of his life. It’s been just a week since two orthopedic surgeons spent about 5 hours of surgery pushing and pulling the splinters of his shattered lower leg back into line. They used a fixator, which is a cylindrical metal cage from which metal pins are affixed and pushed through the flesh of the leg and screwed into the various key pieces of bone. This cage keeps his lower leg bones still and fixed so as to promote proper healing, hopefully. (To see how this mess started, here are parts 1, 2, 3).

The doctor says it takes about 6 weeks for bones to reunite. After that, we’ll see how many of the shattered individual pieces of bone have survived. X-rays show several small floating shards that will probably have to be removed and replaced with bone grafts from the hip, another very painful procedure. 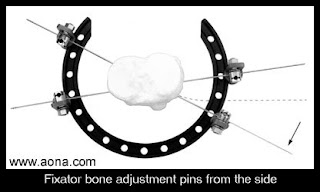 In the meantime, he’s lying there and thinking about the rats that did this to him. We are quite sure it was a put up job of assault made to look like an accident. The fact that the cops drove past twice and would not stop at the accident says a lot. Not to mention that their “investigation” did not even include speaking to the victim, or as they were want to claim, “the perpetrator,” NOR to the one real witness who saw the entire event start to end. AND, we still don’t know if charges will be filed. Fact is, the driver of the lightless jeepney who veered directly into my friend’s path SHOULD be the one in trouble, but we all know that “its ALWAYS the foreigner’s fault” in these here parts.

Another outrage is what is happening to his motorbike. It was picked up and “stored” in a “secure area.” My bedridden buddy has sent one of his pals to look at it and take pictures of it every few days or so. At first it was chained up with another bike that was supposed to have been the bike he caused to crash, something we know never happened. Well, that one has now disappeared. The outrageous part, or one of many, is that his scooter is slowly being taken apart and disappearing. Lights, running boards—you name it—the pieces are “migrating” away somewhere.

We are still worried about possible retribution from the people who did this. It looks like a bodyguard or some other form of security might be in order. At this point, he says he knows he can do nothing about the people who did this; he just wants to get better and move on, and probably move away. As one of my buddies just told me today, “It’s a foreigner’s word against the locals', and we all understand what that means.”

I know one person who understands the above concept implicitly, Lance Corporal Daniel Smith, still falsely accused and unjustly convicted of rape, and now continuing to languish in the US embassy during the slow motion appeals process.

It’s oddly pathetic the reaction I get from many of the local expats that I’ve told my friend’s story to in the interest of warning them. Most want to know “what did he do to attract that kind of attack?” It pisses me off to no end; it’s like blaming an attractive girl for being raped. No one wants to believe that this can happen to them. Funny thing is, I know for certain that if I had warned my broken legged friend two weeks ago that this could happen to him, he would have argued bitterly against ANY such possibility. 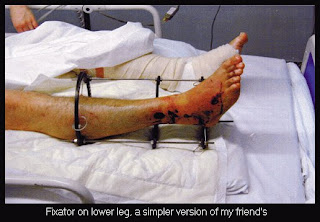 Posted by PhilippinesPhil at 11:31 PM

Couldn't have put it better myself...