For some, poor Lauren Caitlin Upton has become the poster child for our allegedly "poor" American education system, and I’m not talking about “Special Ed.” (No pun intended Ed Abbey.)
Jokes aside (for now), when I first saw this doe-eyed "deer in the headlights" beauty from South Carolina trying to answer her simple beauty contest question, I honestly thought she might be "challenged" in some way, other than being a pageant participant that is.
I shouldn’t say that. In fact, I take it back. One of the smartest gals I’ve ever had the pleasure of hanging out with was Miss Arkansas 1992, Shannon Boy. That girl was sharp, and so nice and down to earth that I didn't hold it against her that she was studying to become a lawyer. By now, I'm sure she is one and probably very successful. Oh, and she has some very interesting "Bill Clinton is a horny dog" stories.

Anyway, back to poor Lauren Caitlin. I know I'm not being fair to her, or to our much maligned education system. After all, it seems pretty obvious that the question in question was really just a way to prompt commentary on the poor state of education in the United States, wasn't it? And being unable to speak well—or in Lauren's case, to speak intelligibly—in front of several million people does not necessarily reflect one way or another on her erudition or on the system that made her that way.

I must say though, whenever I try to watch that beautiful, yet in THAT moment, pitiful, creature trying to answer the simple question: "Why can't twenty percent of Americans find America on a map?" I find myself as uncomfortable as when I watch the "rumbling, bumbling, mumbling, stumbling" President Bush speak to an audience, and I like the guy. Some people just do not express themselves well in public. 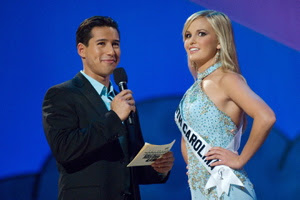 For Lauren, her mind was trying to work, but all it managed to do was spit out bits of disjointed half thoughts and fragments of nonsense. Plain and simple, she became tongue-tied. As a childhood stutterer myself, I know exactly how that feels. Time slows down to an excruciating crawl and no matter how much you try to unlock the words they won't come.

In fact, the harder I tried, sometimes, the worse it got. You figure that saying something, ANYTHING, is better than the deathly silence. Just fill up the dead space with words—never mind that none of them make any sense.
I don't think Lauren is a stutterer. She sort of knew what she wanted to say, maybe, but couldn't quite get it out; but I don't think it was her tongue that got tied—it was her brain. In the vernacular of sports, she choked.
Getting past the poor girl’s inability to express herself, she attempted to respond to a question that only had one or two obvious answers anyway. As a bullheaded contrarian, and due to natural orneriness, I tend to answer questions exactly the opposite of what is probably expected. I like to call it "thinking out of the box," or being “original.” Others might just call me a smartass—all three metaphors are accurate.
Looking deeper, the pageant writers of Caitlin's rather leading question probably weren’t looking for the obvious answer that would probably be something like, “It apparently shows that Americans didn’t study their geography in grammar school.” What they were REALLY looking for was some kind of social commentary—like they do for every beauty pageant. Surprise, surprise!

If it had been smart-aleck me, I would have said, “Well, it seems to show what I’ve suspected for years—that a lot of Americans aren't smart enough to find their OWN butt with BOTH hands!”

All right, that’s too earthy for a Teen USA pageant, but if you could read my pretend beauty contest thought cloud that’s exactly what it would say.

Getting back to Miss Upton—she’s supposed to have graduated from high school not long ago with a 3.5 average. Given that, and her public speaking aside, she's probably a fairly intelligent girl. But, some will use her ramblingly incoherent answer to make a point, which might be that Americans are morons and our schools suck. Well, according to the study used in crafting Caitlin's question, apparently, many of us are! And, our schools do! Personally, I've known both for decades.
Continuing to look at the question itself makes me wonder a thing or two about the people running the Miss Teen USA pageant. Why in the world would they want to embarrass their own nation by using a question that disparages us? Who are these people? It seems more and more lately that certain persons in positions able to do so LOVE to take cheap shots at their own. I don't get it.
I’ve watched a couple of “post pathetic answer” interviews with the beautiful blond, like on the Today Show, and honestly, in those venues she STILL came off as being a cross between a ditzy valley girl and a southern “Dukes of Hazard” babe. I wonder what courses she took in high school that she was able to pull off those straight A's? Oops, there I go again. It’s just hard not to bash her—she makes it too darn easy, especially when she says something.

Enough already. Why spend so much time talking about and obsessing over an inarticulate 18-year-old pageant winner wannabe who came off sounding like a complete idiot on national TV? Good question. Primarily, because she put herself out there and then MADE the very point that her over-simple pageant question was begging to make in the first place. To paraphrase, “Why are so many Americans so ignorant?”

Her response was perfectly ironic—it was the pot answering why the kettle is SOOO darned black, and with southern valley girl inflection.

So this whole silly affair has nothing at all to do with our education system. It’s about Americans finding someone really beautiful; certainly tons better looking than they are, but coming across as a complete imbecile.

Since uttering her blooper from hell, well over a million people have accessed it on the Internet. Why would they do that? It’s obvious—because now 60,542,005 Americans (1/5th of us) who can’t find the United States on a map, suddenly have someone who makes THEM look smart.

Poor Lauren Caitlin. But she DOES have her uses.
Posted by PhilippinesPhil at 11:27 AM

I didn't watch it because I thought the Miss Teen contest didn't have a swimsuit portion which is the only reason I watch such shows. I checked before posting this comment and saw that I was sadly mistaken.

THIS is what little girls are supposedto look up to? Holy shit, it hink Pink had a song dedicated to girls like her... what was it called? Oh yeah... STUPID GIRLS.

She's 18, Not 14. At the time of legal adulthood I expect to see SOME cognitive function. Idiot.

Those pageants kill the notion that a woman can be attractive and intelligent.

She'll be fine. Probably marry a rich lawyer like Senator Edwards and they can spend their days going to the beauty parlor together...

But they can't have everything all the time, right?

But I watch cable news and a game channel. And they have many specimens (anchors and hosts) that seem to to have all in one person.

So Lauren got a big pass from me when her bumbling video clip first appeared as a news highlight. Actually, I considered it a news lowlight.

But, is it just me? When I first glanced at her, I thought she was in her late, or at least mid-20's, all dolled and painted up.

What is it that they do to young teens nowadays? Too eager to pass to adulthood? But then again, a Dakota Fanning, at 10 or 12 years of age, acts and talks like a 20 year old.

The make up thing is common to a lot of cultures, including here in the Philippines.

I remember seeing my first daughter after she was made up for a procession in Metro Manila back about 1984. She was 5 years old and they made her look 20.

Dakota was already exceptionally intelligent from a very young age, which is why she is so sought after as an actress.