It’s just past 9 p.m. Tropical Storm Dodong passed over us all last night, all day today, and has been dumping rain in big buckets since the afternoon. It’s coming down so hard right now that I can hardly hear the TV. Looking at it on the Internet on the Pagasa weather site I can see that we are now on the backside of the “eye.” Click on the photo to get a better view of the overlay. 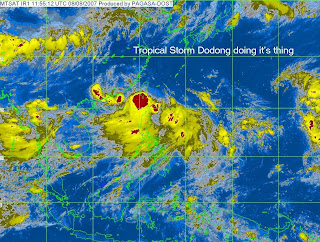 Tropical Storms don’t have the violent winds that typhoons possess, but they certainly can unload a whole lot of precipitation. My first time in the tropics was Western Africa in 1977-1978 and I learned then about the difference between tropical rainstorms and what I was used to up in the northern climes.

The primary distinction between the weather nearer the equator and the northern climes, other than the obvious temperature difference, seems to be the sheer volume of precipitation in the tropics. During rainy season, what passes for a gully washer in the States is just a passing shower here, only here it can last for hours.

Based on the unbelievable quantity of falling rain in these parts, I can see why it would be so important for countries like this to manage the cutting of their forests, especially in the hills and mountains. Lasting for days at a time, this kind of rain will easily super saturate hillside soils that could then potentially collapse under its own waterlogged weight, something that does indeed happen here on occasion with dreadful results.

Last year, during a visit to the northern valley province of Cagayan I saw the indirect negative effects of how this rainy season rain can be extremely destructive when the harvesting of forests goes “unmanaged,” which is one way to put it. I spent several days in the little town of Gatarran on the Cagayan River and I was struck at its wideness. It seemed as wide as the Colorado or the Mississippi.

I spoke to a wonderful 87-year-old woman who had lived there her whole life; she told me that the river is now more than three times the width it was when she was a girl, and it gets wider in some spots by as much as 10 meters a year. The river is literally eating up the valley. She blamed the greedy timber harvesters, land developers, and shameless officials that let it happen. Every year, more houses and property fall into the river, forcing people to rebuild a little further away or to just move on to some other location. What a shame, and totally avoidable.

The rain is slacking off now. These storms are like that. From the satellite I can see that a mini-eye is passing over, but once it moves north with the rest of the storm towards Taiwan I know the hard stuff will continue.

I shouldn’t have gone out today, but the rain didn’t seem so bad at 12 noon when I buzzed away on my Chinese scooter wearing my waterproof camping suit. The rain had been falling steady and not crazy hard like it eventually did. By 6 p.m. when it was time to head home it had been a deluge for at least three hours and the streets could not hold the runoff.

I had been listening and watching it fall like that and feeling an intense dread the longer and harder it fell. The reason for my trepidation is the acute unreliability of my “ride.” My scooter is Chinese, an “American Voyager,” and basically it’s a piece of crap. It didn’t seem too bad when I bought it in February 2004, but its crappiness soon became apparent as it began to average downtime for repairs of at least once a month. For instance, I’ve had to change out my accelerator cable a dozen times, the first time only 5 months after buying it new, and that’s just the start of its shortcomings.

My advice: don’t buy Chinese motor transport of any kind for at least another 15 years; spend the extra money and go for Taiwanese or Japanese wheels. My next motorbike will be a Honda or a Yamaha.

The worst thing about my Chinese piece of crap scooter is that it hates rain, and that’s not good when you live in the Philippines. It doesn’t matter that I’ve replaced or rebuilt virtually every part of the darn thing, it still gives me fits in the rain, and with today’s extreme conditions it did me in once again.

I was half way home and thought hopefully that I might just sputter all the way back into my carport just over a mile away. That is until I chugged slowly off the north end of the Hensonville Bridge and into a foot deep rivulet. That’s where it stalled.

I had to totally wet my shoes and socks to push my POS* scooter to a higher and drier area somewhat out of the way of the splashing traffic. Then, with a prayer and a curse on my lips I pressed the starter button. I don’t know if it was my entreaty to the Lord or my curses at the bike, but it weakly turned over, and happily for me, continued to do so.

I hopped back on and throttled her up hoping to blow out any of the stray water that had killed it to begin with. The engine didn’t sound very convincing to me, it hiccupped and refused to roar back to full gallop, but I figured what the heck—Go for it!

I knew the back road to my subdivision was going to have the deepest water yet, so I determined to keep the throttle going with my right hand while working the brake when necessary with my left. My hope was that keeping the engine well gassed and revved would allow it to fight through the occasional “gulp” of water.

Sure enough, when I made the turn onto the dreaded road that was more river than road, it was worse than I had imagined. I was directly behind a jeepney chock full of miserable looking damp passengers and I watched some of them curiously watching me from their sardine-like positions. We were barely moving, but as long as I WAS moving then I was satisfied with the forward progress. I held my breath listening to the sick sound coming from the engine of the unwilling Chinese two-wheeled fiend under me.

The jeepney pulled over to drop someone off, and with a warning beep, I carefully passed it trying not to splash anyone. At last, a high place in the road and I relaxed a little. Soon, however, I found myself back in the floodwaters and directly behind a pair of trikes moving in tandem as slow as they could without being motionless.

Now, I had a problem. I could NOT go that slow and keep the engine lit. Several times it nearly died as I jockeyed the hell out of the throttle while jamming on the brake at the same time. So, I had no choice but to pass them, even though I did not want to do it. I knew when I eventually went around that I was going to drench them with my wake water, but good.

I sighed, gave them a quick beep, and cranked it up to make my move. I tried to shift as far to the left of them as I could, but my bow wave was necessarily high as I goosed my speed up to pass before an oncoming car reached me.

I cringed hearing the passengers and drivers of the two trikes protest loudly at the dirty road water I was splashing up onto them. “Hey!” one particularly outraged fellow yelled at me.

“Sorry!” I called out, but I was also irritated that they had forced me to it.

Luckily, with only a few more sputters and hesitations in some of the really deep spots, I made it all the way home. I learned my lesson though—next time I’ll just stay put until the storm passes. OR, better yet, until I get me a more dependable scooter. Hopefully soon, my next bike is going to have a stamp that says “Made in Japan.”

*piece of sh*t
Posted by PhilippinesPhil at 1:40 AM

I haven't been in the lowlands during a big rain but up in the mountains of Bagiuo City, it was really scarey. The streets turned into rivers and at very steep inclines, whitewater ones that could literally sweep you off the side of the mountain. The best part of it was that afterwards, all the filth in the streets are further down the mountains.

Wat is much more familiar with the inconveniences of flooding than I am. His stories about what he's been through in Manila during particularly heavy rains makes me think, "better him than me!" He's also a "mountain man," living in Baguio on weekends. Isn't that where you hang out while you're here Ed?

Its not usually too bad here in Angeles City, except during the gully washers like yesterday. We have good drainage with the Abacan River nearby, plus, over the millenia, Pinatubo has put layers of volcanic material down, which keeps us mostly high and dry.

As far as washing away the filth, folks around here throw it down faster than any rain could possibly wash it away.

Phil,
This has gotten very little attention from the media here.
If you have any good links, maybe you could post them at the Elephant Bar?
http://2164th.blogspot.com/
Thanks,
Doug
---
At least 52 die in battle between military, rebels in S. Philippines

MANILA, Aug. 10 (AP) - (Kyodo)—More than 52 people were killed, including 25 government troops and two high-ranking members of an al-Qaida-linked Muslim extremist group, in a fierce gunfight between soldiers and rebels in southern Philippines, an army spokesman said Friday.
The fighting erupted early Thursday when a group of suspected Abu Sayyaf rebels ambushed a military convoy in Indanan on Jolo Island, killing 10 soldiers and wounding two others, and continued into the night in neighboring Maimbung where 15 soldiers and 27 rebels were killed, Philippine Army spokesman Col. Ernesto Torres said.

Actually, what goes on down there against the Abu's might as well be happening on the moon. Folks around here are just as disconnected from it as most Americans are from the conflict in Iraq and Afghanistan. You know as much as I do doug.