I've been waiting for the proper time to write this follow up post on the Haditha Marines. I think now will do. These fellows are the half-dozen Leathernecks originally accused of criminality for not following the rules of engagement (ROEs) during a patrol that erupted into havoc and mayhem in Haditha, a town in Central Iraq. The two-year 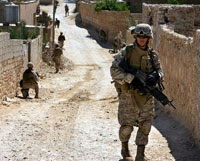 anniversary of that tragic event is fast upon us, and what's prompting me to write this continuation is that the last of the sacrificial Marine lambs are about to have all charges against them dropped.

On June 14 of last year, I wrote a scathing post against John Murtha, the congressman from Pennsylvania who insisted on accusing the “Haditha marines” of basically committing war crimes before an investigation was even completed. Its turning out that he apparently lied about getting a briefing from his Pentagon “insider” and instead it looks like he just bought the pap fed to him by the TIME magazine article that started this whole farce to begin with. The “insider” was found to be an officer who states that "the briefing" he provided to the congressman was a full week AFTER Murtha’s accusations. At this point, the congressman has little to no credibility and still he stands by his original assertions by not retracting them or apologizing for them EVEN AFTER he has been proven wrong. (Why do people vote for this guy?)

At first, I planned to make this post a kind of “I told you so,” but I changed my mind after doing more Internet surfing and reading up on the current status of the charges. I haven’t changed my mind that the marines were unfairly treated, but there are still at least 15 dead Haditha civilians, including women and children, and with them in mind I don’t feel like gloating.

Over the weekend, I watched several TV interviews with one of the lower ranking marines, Justin Sharratt, now an ex-marine who at the time of Haditha was an E3 lance corporal. He sat book-ended by his dad and his lawyer.

The gist of his defense is that he and the other marines followed the ROEs to the letter and so no one should have been brought up on charges. What really upset Justin’s dad were Congressman Murtha’s instant accusations of murder by the marines and the lack of an apology since, especially now that most of the charges were either reduced or dropped.

Going back to the beginning, it seems that the reason the whole incident even made the light of day was a TIME article claiming certain things. Namely, that after the marine patrol was hit by an IED, which killed one of their number, they became so enraged that it touched off a firestorm of death resulting in the killing of at least 15-19 Iraqi “neutrals,” another word for supposedly uninvolved civilians. Altogether, 24 Iraqis died, including the known insurgents.

During the interview that I saw, Sharratt says that after the IED, his patrol took fire from insurgents, and at least one attacker took cover and fired from inside a residence. By the standards of the ROEs at the time, the marines “cleared” that building and others. Legally, as trained, they did it by throwing in fragmentation grenades and then bursting inside, firing their weapons until the building was “cleared,” which is a euphemism for “people inside the building were no longer able to fire at them.”

Some of the other stuff that supposedly happened, where a marine purportedly shot men trying to surrender or that another marine urinated on a dead Iraqi, I take all that with a grain of salt. If that stuff happened, or was reported to have happened, the unit’s officers should have investigated. It turns out that one marine’s testimony resulted in these charges but then based on conflicting testimony from other marines and civilians the charges were found to be groundless by the military judge.

After my reading, its fairly clear to me that these guys didn’t go on some berserker rampage as claimed by Jack Murtha, but perhaps they did push the envelope concerning their proper following of the ROEs. I refuse to judge them however, because no one was firing at m 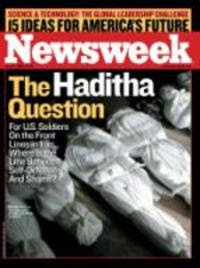 e, and I was not there. Still, we can’t beat Islamic terrorism by killing 15 civilians to get 9 terrorists. By doing so we play into their hands. They WANT us to kill innocents because they know TIME magazine and Reuters will then do their work for them.

It seems to me that one of the reasons things are finally turning around now in Iraq is because of the new leadership and mindset provided under General Petraeus. His newly implemented counter-insurgency (COIN) manual has changed fundamentally the way our troops react to incidents like the IED and subsequent marine response that happened at Haditha two years ago.
Now, from my understanding, our troops have been directed to react with more delicacy and discretion than perhaps was used at Haditha. Destroying a house full of neutrals and inadvertently killing them all in pursuit of a single insurgent or two is completely counterproductive in trying to win the support of locals. No matter how closely those marines followed the ROEs, if it resulted in the deaths of all those civilians then it was wrongheaded. Just the same, Haditha is by no stretch of the imagination a My Lai or a Wounded Knee. No way. No how.

I believe the reason the charges have been dropped against the Haditha marines one-by-one is that the ROEs WERE indeed followed. If there is any real culprit it WAS the ROEs in place at the time, as well as the leadership on the ground that allowed the no holds barred assault on that home. But, if that was the standard at the time, then no one should be faulted for that. Marines do what they do—they close with and destroy the enemy. Unfortunately, we are no longer in an “all out war.” COIN, to be successful, must be a mixture of combat tactics and discretion. We can’t just “kill ‘em all and let God sort ‘em out,” a phrase we used to jokingly use when I was still “in.” Well, it’s no joke.

It seems that the only charges still ongoing are against 1st Lt. Andrew A. Grayson, who is being charged with negligence, for allegedly not properly reporting the civilian deaths. From what I’ve read this charge is a case of second guessing, since at the time of the incident it was determined that everyone killed was either an insurgent or died either at the hands of the insurgents or collaterally, during the “legal” assault by the marines. I’m certain that Lt. Grayson will also be found blameless. All the evidence points to everything being done properly at the time, from the post IED response, all the way up to the after action reporting.

General Petraeus seems to have a handle on a more effective “new way” of fighting terrorists now being employed during the current so-called "surge." The general knows that we are fighting people who have no compunctions at all in using the death of innocents as part of their doctrine to draw hatred against US forces. The general is a smart man--he’s trying to get our people to think ahead of the curve on this enemy ploy. Because of this, the collateral deaths our people used to cause so often are not such a common thing anymore. At least I hope it isn’t. Even if it means we put ourselves at a higher risk, we cannot afford to kill 25 neutrals to put away a single bad guy, or even to get 25 bad guys. If a doctor killed his patients every time he excised a few basal cells he wouldn’t be in business for long. Of course a doctor doesn’t have the cancer cells firing AK47s at him either. 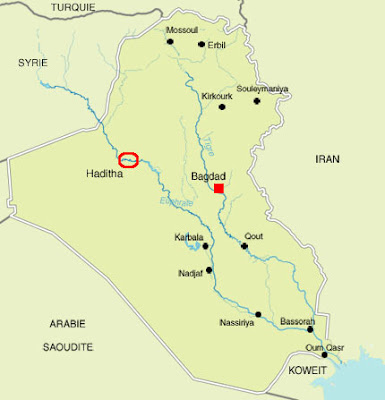 Posted by PhilippinesPhil at 1:48 PM

Though I was greatly relieved with the results, I can’t still get over how in my own perception the conduct of a war has changed. Where actions in combat of fighting soldiers are without haste, when gun barrels probably are still hot, brought to the bar of justice, minutely analyzed and argued, and judgment rendered. All this while a war whose final outcome has not even peeped out is still raging.

I suspect an overzealous and agenda-driven media has triggered this, aided largely by a public that is ever pliant in receiving media reports and believing the worst of fighting men, whose primary function anyway is to destroy and kill those trying to kill them.

I doubt if these were true in the previous wars. Even a big and messy war like WW2 our recollections partake more of the likes of the Nuremberg trials, which took place after all the hostilities have ceased.

The other night, a representative of a company was proudly explaining the newest product that is being attached to the end of the pistol barrel of police officers. It is a camera, the size almost half ot the pistol, that will automatically start shooting once the officer unholsters his gun. Where that gun is pointed and fired, the camera shoots too. Imagine the officer now carrying that added bulk and weight all because his every action with the gun might be brought into question later on. I don’t know if my boys know about this already.

My thoughts? Well, while we are on the subject, I suggest we implant a miniaturized camera in each officer’s forehead and have a central office control its functionning. That should cover all possible questions regarding their actions.

I think the TIME writer reacted viscerally to the images of dead women and children. Somehow the sight of a dead toddler causes about anyone with even an ounce of decency to take pause. (Thats why Al Qaeada has no problem with it).

Several times while speaking to vets from the various wars I've had them break down emotionally. Those most affected were the ones involved with the death of innocents. The sight of a 57 year old man sobbing bitterly over the memory of a bullet ridden baby from 40 years ago is heartrending. War must be hard on everyone--the fighters, those caught in the middle of it, AND the reporters.