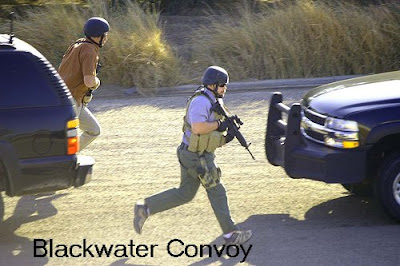 R. J. Hillhouse of the Christian Science Monitor just wrote a piece called “Don’t blame Blackwater.” If you haven’t been following the news closely from Iraq then you might not have heard of the security contractor called “Blackwater” employed by the U.S. State Department to keep their people “safe” as they go about their duties in Iraq.

Back in September, Blackwater personnel shot up a Baghdad street when they determined the State Department motorcade they were guarding was "under fire from several locations." What has the Iraqi government upset is that 17 civilians, including a policeman, died in the “crossfire” resulting from that shoot ‘em up.

(As it turns out, the dead Iraqi policeman fired on the convoy when he perceived that the Blackwater security people were killing bystanders around him. I probably would have fired at them too if I were him.)

The incident smells an awful lot like Haditha to me. I just posted the other day a follow-up on the Haditha incident of nearly two years ago where a Marine patrol similarly claimed that as they lawfully defended themselves going after attacking insurgents that a multitude of civilians died collaterally. Some 15 non-combatants, including women and children, perished in that mêlée.

Hillhouse is of the opinion that the reason Blackwater used the apparent aggressive firepower that it did on that crowded Baghdad square is because “State” has developed a culture of zero acceptance for American Foreign Service casualties. I’m sure Blackwater is even doubly on guard to prevent capture.

So, The State Department’s security policy has been to protect -- at all costs -- all of their diplomats and Foreign Service Officers serving in Iraq, EVEN if it means Iraqi civilians have to die at the heavyhanded tactics of the mercenary security forces doing the "protecting." Blackwater evidently took this guiding principle to heart, and when their convoy became stalled in Baghdad traffic and they felt threatened, they basically reacted full force with stun grenades and massive assault weapons fire laid down almost like a final protective fire on anyone within range outside of their perimeter.

Blackwater’s chief and founder, Erik Prince, claims that his people in Iraq ONLY do what they do under the direct supervision of the State Department’s security heads. Prince says that if State wants an aggressive style of security then that’s what Blackwater gives them. If he’s right, then the State Department is trying to blame the security firm for simply following orders.

From my own experiences with the State Department, both as an American citizen “customer” at several embassies in the world, as well as having worked for them operationally as a U.S. Embassy Marine Security Guard, I can comfortably say that by and large our diplomats and FSOs are arrogant, insensitive and many are even a bit dimwitted, and that’s putting it nicely.

In other words, knowing the mindset of our embassy and State Department people, I’m giving Blackwater a partial benefit-of-the-doubt on this one, although I’m having a hard time believing that these supposed “security professionals” can truly justify the massacre of those 17 innocent Iraqis.

The fact that the State Department let go without charge all these Blackwater “hired guns” tells me that these contract trigger-pullers were probably following policy and State doesn’t want that to come out in an investigation and trial.

As I said in my last entry, we can’t win this counter insurgency by wiping out everyone in sight whenever our people come under attack. The fact that many of Iraq’s tribal leaders are coming over to our side has more to do with their perception that U.S. military is the lesser of two evils, the other “worse evil” being the even more brutal members of Al Qaeda.

I think of it this way: If I were an Iraqi and had lost a family member in that Blackwater assault, or at Haditha, I would probably join the insurgents myself, just for the opportunity to kill an American. Revenge might not be all that sweet, but it’ll do until something better comes along.

General Petraeus understands this simple human visceral reaction for personal justice and has dictated that our people no longer destroy entire buildings full of non-combatants in order to kill insurgents hidden among them. Evidently however, the State Department doesn’t believe that any of the general's new COIN tactics applies to them, even though this approach is now helping to turn this war around.
x
Posted by PhilippinesPhil at 3:39 AM

I work with a fellow whose first ex-marine cousin works for blackwater. They are close and up until recently when the fellow was injured by an IED, he sent back videos that show just the opposite of what you said.

Those videos show "spraying of rounds", they show random pot shots by this fellow who is a sniper, and other things that lead me to believe that they are nothing but hired mercenaries. I don't consider myself a softey but these videos make me sick to my stomach. I personally think the only people in a war zone should be people in the military with oversight. Blackwater should be out of Iraq right now.

There are several other security agencies in Iraq, and every situation I'm sure is different depending on the fellows in the detail and the type and severity of the attack.

The fact is that 17 bystanders died. I'd like to see a report of why they died and how. So far, I've seen nothing official. Someone should be culpable, someone always is.

I'm not holding my breath on a report because if one ever gets published, I'm sure it gets heavily filtered by politics and means little. I guess when it comes to these situations, I'm under the belief that God will sort it out.

I don't agree Ed. If Blackwater and State can't "come clean," then Blackwater should be banned from anymore gov't contracts and State should just get out of Iraq and let Petraeus handle ALL aspects of rebuilding. State has proven once again that they are a bunch of corrupt pusillanimous do-nothings.

Didn't I hear that Blackwater is already banned? Or at least their contract isn't going to be renewed next year?

They were banned by the Iraqis, and I don't blame them. Now they need to ban State. Can you tell I'm not a fan?