Before I could REALLY get into the sport of mountain biking I knew that I would have to modify my inadequate hybrid mountain/road bike adequately for safe use on off-road trails and tracks, at least to 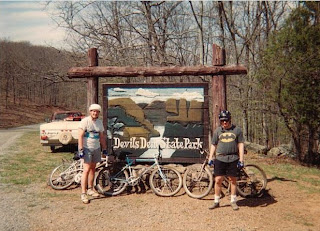 the point that I could ride it downhill without crashing. Lord knows I didn't want to do THAT again.

The bloody crashing fall from my previous post was never repeated again, at least none ever as painful or dramatic as that first one. The primary reason I had fallen in the first place was the improper setup of my bike. The arrangement of my seat and handlebars put my body too far forward and my hands way too low on the steering. The thing is, I didn’t know this intuitively; what I needed was an expert to help me figure out how to fix it. My friend, Rich, got me started on the right track, but finding genuine expertise was the next step.

In short order and quite by accident, I managed to find just the guy I was looking for—he was in a new bike shop that I happened to stop in at while looking for some new knobby tires for my bike. He was the manager, a "kid" in his early 30s who had spent most of his life riding bicycles competitively on the BMX circuit. Lucky for me, for the last few years he had taken up mountain biking as a way to stay in shape for BMX. Right off the bat I could tell he knew what he was doing and over the course of the next few paydays he fixed me right up. I had found my bicycle guru.

Based on my new riding mentor’s recommendations I bought several new components to affect a more suitable off-road ride, especially for negotiating my nemeses, those steep rugged descents—as far as I’m concerned the most difficult type of riding there is.

Over the next several months, as I transferred my mindset from street riding to mountain biking, I also strove to transform my “partner in crime,” my heavy red “confused” hybrid. She was more expensive than a new girlfriend. I bought "her" a score of new components, most of them elective, like knobby tires and water bottle brackets; but to get my “baby” where it really needed to be to effortlessly handle those steeply nasty descents I made three crucial component purchases.

First, I got a significantly longer handlebar stem. The longer stem put it higher and allowed me to extend my arms to keep my bodyweight as far away as possible from the front wheel. I've seen downward tracks so precipitous that I had to actually push away from the handlebars. As a street rider for 20 years I never had to worry about such a thing before, but mountain biking is a different animal. Its much more extreme, but then again, its also much more exciting. Draping one’s body over the handlebars is how it’s done on pavement to reduce drag, but try that off-road on a mountain bike and you WILL fall. Just ask me.

Perhaps the most important modification was changing out my seatpost and seat. The new post was cantilevered so that the new seat, also improved, hung an extra inch or two further back. That allowed me to sit back closer towards the center of the rear wheel for better control and stability.

As a matter of technique, on exceptionally steep long downhill runs I would sometimes stop at the top of the hill, release my seat and lower it almost as far as it would go. This gave me an even lower center of gravity, although sitting lower sacrificed peddling leverage--it was like trying to ride a child's bike. But the way I looked at it, descending a crazy-steep hill requires little peddling anyway and when climbing most mountain bikers stand on the pedals anyway.

I include the seat with the seatpost, but technically they are two separate components. Eventually, I swapped out the original seat for a beefier, better-engineered one; because once again, I learned the hard way what happens to a normal seat when an inexpert rider (me!) does not always properly use the knees to absorb the G-forces when “bottoming out.” The worst one I ever screwed up caused my seat to break a weld and very nearly broke my lumbar spine along with it. So, I found it was better to have a seat with heavier springs designed for idiot riders like me.

The third and final vital component needing replacement was the pedal set. One of the reasons I crashed my first time out was the lack of a means to hold my feet to the pedals. All that jouncing over the rocks and ruts shook them right off. There are newer and supposedly superior pedal systems, but I went for the old-fashioned toe clip and strap arrangement. That way, I could ride wearing my running shoes, which I liked to have on just in case I broke the bike and had to hoof it out of the woods for a few miles. It happens.

Truthfully, by the time I got "Hybrid" squared away into a real mountain bike, or almost so, I was totally hooked on the sport. My riding buddy, Rich Fucci, and I could not get enough of it. We lived and breathed trail riding, exploring every patch of woods we could find, both on and around the base. I don’t think there was a road or deer trail within 10 miles that we hadn't tried. We searched for promising trails and unimproved dirt roads until there was no place left to search. Often, when the trails petered out we simply put our helmeted heads down and bushwhacked to prevent from having to double back.

On that subject, bushwhacking can be a lot of fun. Bushwhacking is when a biker rides through the trees, fields and undergrowth without regard to trails or paths. When doing this sort of riding bring along plenty of tools, a patch kit and pump, and oh yeah, extra chain links. Flat tires and broken chains are par for the course, especially once bushwhacking is in your blood. I learned it the hard way.

I should say that most mountain biking lessons ARE learned “the hard way.” It can be a very tough sport. Depending on the difficulty and wildness of the trail, it certainly is not an activity for the faint-of-heart or weak-of-will.

And now that I think of it, I’m reminded of another mountain biking lesson:

A good reason to have a lightweight bike is because there WILL come a time when you’ll have to carry it over your shoulder. Why not just push it along on its wheels you say? Well, sometimes the damage to the bicycle is so bad or the trail so muddy or impassable that the wheels won’t turn. Believe me, it happens.

So, after turning my red hybrid more mountain than street, I felt like I was turning into quite the rider. I knew this because Rich Fucci could no longer beat me. I bought my bike a month after I got back from the war in May or June of ’91. It took two more months to get it “right” by upgrading it.

As I mentioned, by the end of the summer, Rich and I had ridden every nearby (and not so nearby) trail and dirt road at least a dozen times and I was bored with them all. I wanted something more challenging and closer to home. Soon a hazy plan came into my brain housing group. I’ll tell you about it in my next post…
Posted by PhilippinesPhil at 2:58 AM