Parenthood is wasted on the young 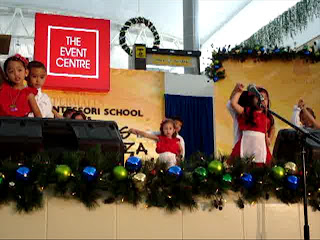 The day before yesterday I spent all of six hours inside the people-filled wide-open spaces of the local mega mall. That mall has been there for at least a couple years now, and yet, unbelievably for some, that was the first time I’d been in there. I believe I’m the only person I know living in the local area who had never set foot in it. Such is my detestation for all things shopping.

With that said, why would I suddenly go to what for me is such an objectionable location, and for a full quarter of a day, if I hate the dang place so much? Well, that’s easy. My two girls performed there in their annual school Christmas recital, and I wasn’t about to miss that.

Also, I signed on to watching a post recital magic show with them in the afternoon, also there in the mall. Once again, that’s not something I would normally want to do, except where it would be important to my girls for me to be there. After practically begging me, I wasn’t about to disappoint my two little daddy’s girls. Anyway, aside from not wanting to disappoint, I confess that I wholly enjoy watching their enthusiastic reactions to events never yet experienced, like when a magician pulls a dove out of his hat. I never get enough of seeing their joy inspired by such things.

Recently, in another blog, I read commentary by presumptively as yet childless blogger folk describing what they see as the “horrors” of parenthood. It was the predictable references to crying, puking, needy little poop machines. In some ways their negative descriptions are true. Rearing kids can be a trying experience, but, for every one of those supposedly “horrible” moments there are a multitude of really cool ones, such as what I experienced watching my girls up on there on the stage in the mall.

The 4-year-old, my youngest cutie, is a preschooler. She and her little classmates looked adorable in their recital outfits. As they patiently and bravely posed in their beginning dance stance, the announcer told us they were about to perform an American style polka. I grinned, knowing that polka originated in Europe, although it’s true that we North Americans, including the Mexicans, have certainly adapted the original Slovakian polka dancing into our very own. Always critical and tending to over think just about everything, I told myself to shut up and just watch the cute little kids do their American Polka!

I’m glad I did, because I was thrilled! Its difficult to explain, but seeing my little progeny up there on the stage, a little girl who just mere months ago was still in the occasional nighttime diaper, looking all serious as she concentrated on doing her steps with her equally cute boy partner made me mist up like a sissy. I wasn’t the only one. Glancing around me, I saw other equally delighted parents. To all you aforementioned baby-hating bloggers, I say you don’t know what the heck you’re missing!

My first grader was up next. There were too many of them to have any room to dance, but luckily for me, my sweety was right in the middle of the front row. Again, her face, so much like my mother’s, was set in studied concentration. They were going to sing 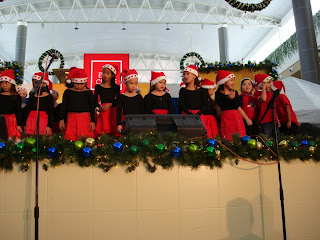 a medley of Christmas tunes, but before starting, each was supposed to have their heads facing down and still. Half complied, including my girl, while the other half kept looking around like distracted puppies. I was proud that mine stayed focus and true to the many extra hours of practice. I was thinking that she gets her seriousness from her old man!

I didn’t appreciate all this daddy stuff the first time around when I was in my 20s. Here I am, 50-years-old, and every papa moment seems so much more important now. If I could only go back and do it right for my first equally precious “batch” of youngsters, I certainly would. As I've mentioned to my mom and dad several times, parenthood is mostly wasted on the young.
Posted by PhilippinesPhil at 1:36 AM

Email ThisBlogThis!Share to TwitterShare to FacebookShare to Pinterest
Labels: kids

If I could only go back and do it right for my first equally precious “batch” of youngsters, I certainly would..

This statement is probably universally true, because I am getting the same feelings with the grandkids. And even my kids are exhibiting traits they did not show when they are still our charges.

My wife saw you at McDonald's at the Mall that day. I didn't see you and I asked her if it wasn't your double because before you spoke of someone who look just like you. And also made it quite clear that you don't like going to the Malls.
We shop at the HyperMarket for groceries because they have a better selection. I like to watch movies on the silver screen so I usually make a Mall a week so I can watch a movie.

The things we do for our ofspring! How sweet. I will take your words to heart. All four of mine are under 11 and hellbent on destroying my will to fight...they are good little devil pups...I hope you had a wonderful Christmas!

I was one of those people who disdained parenthood. Now that I'm a parent, I understand completely and don't know how I got along without a little girl running around the house always making me laugh.

P.S. Thanks for the snort on my RP post. You always make me laugh. Are you/can you take part in a primary/caucus via absentee ballot? I would be interested in hearing your pick though I think I could guess.

Aha! So now you admit that experience can change your viewpoint! I think there's hope for you yet. Spend a few years talking with veterans and we'll have you up to speed on fighting these jihadists. Got to get 'em where they live buddy.

Glad you took the "snort" in the good natured way I gave it. Sometimes a Bronx cheer is the only way a person can really convey their opinion, if you know what I mean.

Hello Phil! Just dropping by to say, Happy Holidays to you and your family!

Thanks Wat. Nice hearing from you. Same thing back at ya!

hi..!
i am not a parent -yet..so i'm still loving the idea of parenthood and having kids, even if they are monsters on the loose..
but i can relate to not wanting to go to malls..especially sm malls here in the philippines..that's where the crowd always goes..but i do love shopping..