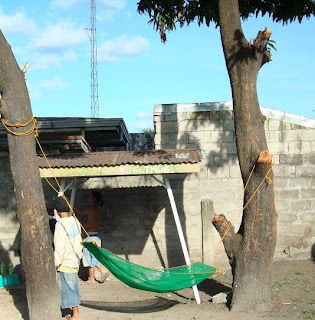 Stretched out in my hammock last week, I gazed idly up into a murky gray sky through the branches of my two mango trees. I closed my eyes, enjoying a gentle breeze. It was relatively cool out with the sun hidden behind the thick cloud cover. An occasional raindrop fell, a very unlikely event during this, the dry season.

Sighing contentedly, I stretched my entire body, lacing my fingers behind my reclining head. I opened my eyes and went back to staring vacantly upwards. However, almost as soon as I opened them, out of the blue, or out of the gray is more like it; I sighted something so eerie high above that it caused me to strain my neck and squint my eyes.

“What the heck is that? Look up there. Am I really seeing that?” I said to a friend sitting nearby at a picnic table in the yard.

We both peered up. It was a spider web over three feet in diameter strategically placed almost at the top of the 25 foot tree in a round opening in the leaves. Right in the middle of it was one of the biggest spiders I’ve ever seen. 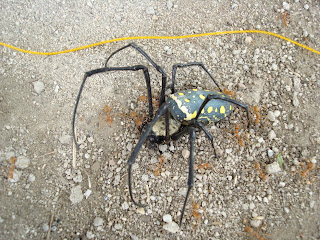 Even from that considerable distance, or especially knowing that it was so far, I knew that it was quite exceptional in size. It looked like a chicken’s egg with legs. The web, the spider and its outstretched legs were perfectly silhouetted against the sky, like some menacing logo. I tried to go back to relaxing in the hammock, but knowing that huge arachnid was hovering almost directly above me creeped me out.

So, no longer able to relax, I got up and got my Cybershot camera. Using the zoom and the highest resolution possible, I took some photos of my newfound 8-legged neighbor. Unfortunately, I lost all the shots when the memory card when bonkers before I could download them. Ehhh!

Just the same, I enjoyed the sight of her up there. Part of what I like about living here is that things are so different than back home—exotic is the word I’m looking for. Seeing that big ol mango spider suspended high up in my tropical fruit tree was delightful for me. I added it to one of the things that makes living here special. 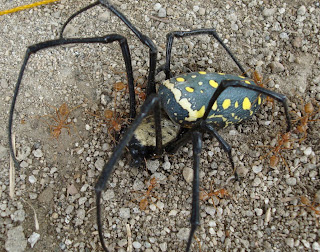 Then, a couple mornings ago I went outside to observe the latest goings on with my home improvement efforts. My little work crew had arrived and was just starting to work on making concrete tiles as part of my landscaping vision. I carried my camera out to capture the work in progress. Sadly, I also ended up taking crime scene photos of the body of my now deceased spider friend.

She was on the ground right side up as if resting. I asked the guys what happened to her. All they knew is that she was there already dead when they showed up a half hour earlier. More than a dozen of the big red ants that live in my mango trees were pulling on her legs and body. I couldn’t tell if they were stinging her or trying to dismantle her. I suspect they were instinctively attacking her since I don’t think they are carrion eaters, but I may be wrong.

The dead spider looked totally intact and undamaged. I could see nothing obviously wrong with her. Her body didn't appear crushed and her legs all seemed normal. So what had killed her? 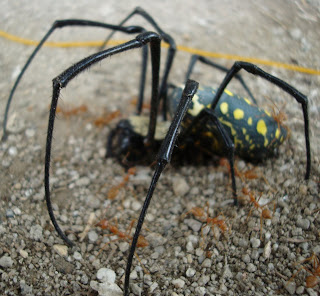 The one good thing is that I now had the chance to examine her magnificence from up close. From the photos you can see she had wonderful coloring, and what a massive body! Her legs were each over three inches long, while her body from end-to-end was close to three inches. I felt sad looking at her still form.

“Are you sure she’s dead?” I asked my guys. “O O,” they answered. I shook my head and sighed.
I’m thinking it might have just fallen. A much smaller run-of-the-mill spider has virtually no mass and can freefall from any height with no harm to itself; but this thing! It was so substantial that if it fell I’m sure its insides ruptured just as a small bird’s egg would, which back when the spider still lived is exactly what it resembled resting in its web way on high.

Then again, maybe the big red ants swarmed it and stung it to death. Indeed, they were still teeming all over it as it lay dead on the ground. Perhaps the two creatures are mortal enemies up there in the world of that 25-foot-high ecosystem.

I just hope there are more. Maybe she left behind some baby spiders. I’ll be looking for them, even if it’s just to make sure they don’t fall on me while I’m swinging lazily in my hammock. 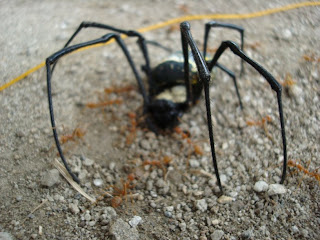 Posted by PhilippinesPhil at 3:46 AM

Email ThisBlogThis!Share to TwitterShare to FacebookShare to Pinterest
Labels: spider

.... kill them all, and they wont fall on you as you're swinging lazily on your hammock.

Can't we all just get along? You're such a jihadist Kat... Get with the program girl. Take THAT from a supposed neocon! Although, when it comes to those damm giant red tree ants, I DO intend to kill as MANY as I can... grin... I have to say though, that cool spider and others like it, as long as they keep their distance, I love having them around...

I hate mosquitoes and flies. Spiders eat them. The enemy of my enemy is my friend. And besides, I've never been bitten by a spider.

I'm ok with spiders too, in Texas it's the mosquitos we hate.

....spiders creep me the F out. I have no fear of snakes, or most other supposedly "frightening" creatures. But man.... Indiana hated snakes. His father hated rats. I hate spiders.

It's cos I read lord of the rings when I was a kid - Frodo was incapacitated by he spider which almost ruined the entire quest if it wasnt for samwise the brave! THis is an example of vicarious learning.

So, you admit that your unreasonable fear of spiders is based on a childhood fantasy. Okay, that's the first step doctor. Lets get control of this so that you can live in peace and harmony with your brother and sister arachnids. Come on "doctor," heal thyself!

Yes, it began as a childhood fantasy, but continued as I got a few spider bites that - while not debilitating - were incredibly annoying.

Yes, I"m afraid of them... but more than anything, i ahve an unreasonable hatred of them. And I'm okay with that.

Anyway, Doctor Phil, there are a lot of things I should see a shrink for. This isn't one of them. :-p

I have not seen local spiders that size.

A slightly comparable one in terms of size and where they live is the one that we used to call Madame X spiders, because they make their webs high in trees, usually fruit trees, and in the middle of their well-stretched web is an "X". And we feared them because they were said to be poisonous. They were also large, comparatively speaking, but had dark coloring in their bodies and tentacles.

But what you featured I have never seen before. I wonder if its size is just a fluke or an aberration. Shades of Chernobyl! HeHeHe.

BTW, I wonder if the local game/sport we kids used to play, pitting one spider against another in a duel to the death is still being played there. As I recall the arena was an ice-drop stick where two spiders were released from each end. It was amazing discovering how certain species were very war-like while others more docile. As a kid, we used to hunt for them and it is amazing to recall how many different species we collected, sorting them, feeding them, and caging them like they were gladiators. Then the ultimate fight! Now, all this sounds cruel and inhumane, right?