I. Tree House, From Dream to Reality 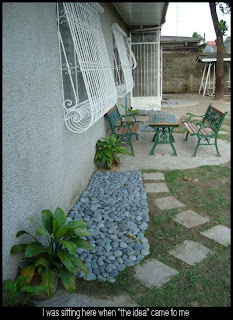 The idea for it came to me late one afternoon sometime after the beginning of the year. I remember the exact instant. I was relaxing on a bench up against the side of the house. The air was mostly still, yet as my eyes drew upwards to the top branches of the towering mango trees at the far side of the lot, I noticed that the leaves way up there tossed and swayed in their own private breeze.

At that moment, I wanted to be up there, not just for access to the delicious balmy breezes, but to be able to see way beyond the limited views within my little yard and surrounding walls.

From that day I took to standing at the base of my trees and craning my head to stare up at the uppermost branches, trying to imagine how I could make my strange dream come true. It became an obsession.

What I wanted is what all boys want—a tree house. After all, in my 51 year old heart of hearts, a boy is what I remain. Yes! A tree house! As soon as I uttered the words, I knew that somehow I would make it happen.

I began to speak of my whimsical little fantasy to anyone who would listen. Perhaps I’m a bit of a sexist to observe this, but I noticed that virtually all the men folk I mentioned the idea of a tree house to would stand there right along with me, stare upwards, and marvel at the audacious notion of such a thing. Most of the lady folk, except one, my special one, just smiled vacantly, feigned interest or looked at me like I was some kind of a nut. (Ah, but it is true!)

The tangible version of “the tree house dream” came to be on the day I revealed my “elevated aspirations” to Eddy, the guy who has been the most responsible for all the home improvement work that I’ve been crowing about in my last few posts. In fact, without him, probably few or none of those upgrades are likely to have been accomplished. Without a doubt, Eddy is the man. 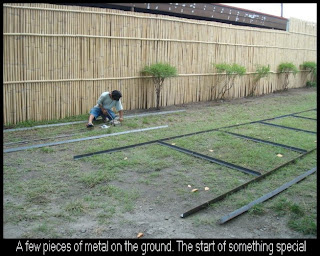 him to look up whilst I explained my need to be high up in them. During the days of animated discussions that followed, ideas flowed fast and furious on how we should “get er done.” I much appreciated his enthusiasm. I mean, Misery loves company, but so does Joy. After that, It became “our” project as we fed off each other’s excitement.

I knew that simply being up in the trees was not going to be good enough for me. I told Eddy as much, that I wanted to look down at the tops of the highest branches so that I would be able to see far into the distance, the goal being the Zambales Mountains to the west and all parts in between.

Now that he had his construction guidance from me, or at least a bare outline of the primary idea of it, Eddy convinced me that a tower was the only way to go. Over the last thirty years he tells me that he has built plenty of them, all of them made to support water tanks filled with thousands of pounds of water, so a few humans wasn't going to be any problem at all. He said it would cost a bit, but it would be relatively easy for him and boys to put one up amongst my trees, so that it would rise above them while at the same time providing access to the upper reaches of all three to provide a means to gather fruit and trim branches.

Initially, I had envisioned a corkscrew staircase rising up from the middle of the structure and coming up through a trapdoor in the center of the top platform. Like always, Eddy had a better idea—to use a series of stairs arranged in 10 feet high landings wrapped around the outside of the tower. As soon as he described it I loved the concept. The guy always knows what I want, even more than I do. Thing is, if I had insisted on the center corkscrew; well, he would have built it like that. 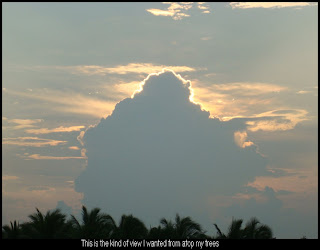 In early May, late one afternoon, I returned home from my volunteer work to find a few assorted lengths of angle iron and round bar laid out in a narrow heap along my new bamboo fence. They had already been painted green; the idea is that its easier to paint the pieces before hand. I was elated to see those few nondescript lengths of narrow metal, realizing that my “fool’s dream” was about to take on solidity.
Posted by PhilippinesPhil at 3:33 AM

wow, i envy you and yur ability to make these renovations happen.

Its more a capability I think. Eddy and his boys are the ones with the abilities. In the local vernacular, Eddy is going to get a good Christmas from me this year.

it's not foolish at all...I wish I could be there to enjoy the view.

Just wait till you see how it turns out... stay tuned. Still painting now though... I'll post again soon on the continuing saga of "the building of..."