I think that one of the tendencies I picked up from my dad during my developing "moving around years" is my continuing aspiration to make every place I live uniquely my own. In the 50s and 60s, right up until our last base in 1970, every time we moved into a new home, no matter where we were, he did things like plant gardens, build picket fences and construct screen porches. 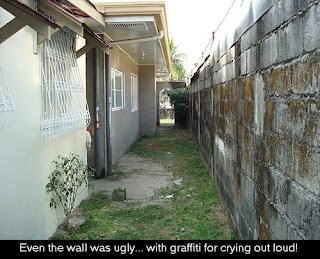 I’ve been in my new place since last December, and slowly but surely, I’ve made my mark on this "little piece of heaven." I was just looking at my Flickr photos at my "home improvement" set and I have to admit it sort of impressed me as to how far I’ve come with my "doings." 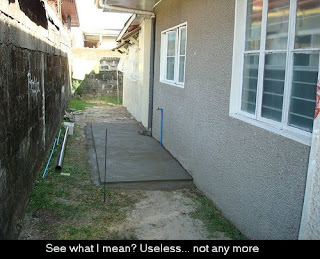 Late last year, as soon as I saw my new digs I realized this place had potential, in spite of its dingy dirtiness. The couple who had lived here before had done nothing with it; in fact, they'd probably contributed to its malaise. The yard was a mess. Everything on the inside and outside of the structure needed painting or a good scrubbing. It was a “fixer upper” with a capital "FU." 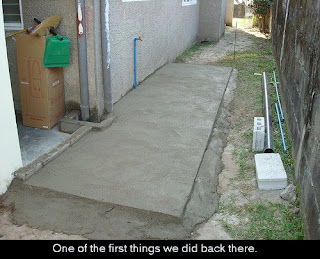 So, whenever I have a few bucks to spare I get to work on the next project. After some 5 months of slow but steady fixing, remodeling and modifying, I’ve just about got it where I want it. And I have to say, she’s starting to look and “feel” pretty darn good. 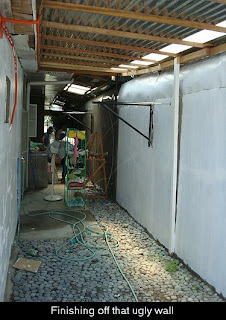 The first thing I realized that needed doing was to secure it. I got that realization from a rude awakening, literally. Only a few days after moving in, something woke me up at 2 in the morning. It was a strange muffled scratching noise. I rolled out of bed and tiptoed to the empty spare bedroom next to mine. In the darkness I saw a man’s arm reaching through the freshly torn screen, evidently feeling around for something to take. When I saw that disembodied arm, something snapped in me. I snuck back to my room for my bolo knife. 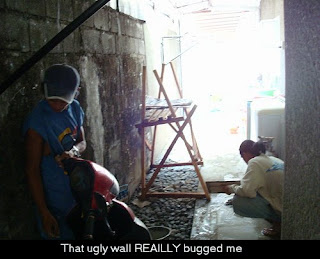 Grabbing the pseudo-sword, I went back to the scene of the impending crime fully meaning to get me a “souvenir.” I was going to get me an arm, or at least a bloody-ended hand. I could always clean up the resultant gush of blood later. But, as I entered the mostly empty room the thief must have heard me because the arm hurriedly jerked back out of the window. 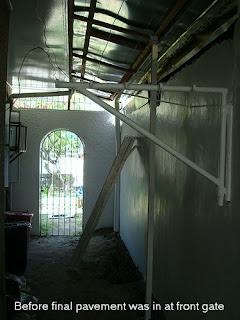 I rushed to the back door with deadly intent, and once outside, silently snuck from one back corner to the other searching for someone who had no business being there so I could slice him up. It was a stupid idea, but in times like that my mind ceases working properly and I just wanted to kill me a robber. I’m glad now that he made good his escape. 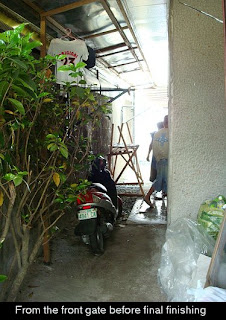 The next day though, I told the guards about my encounter and I made sure they knew that I was deadly serious about protecting myself and my possessions by whatever means I had at hand. I wanted the word to get out about that crazy foreigner willing to close with and destroy all thieving comers. Sometimes having a crazy reputation is all one needs, and what better way to get that impression out then to do spread it myself? 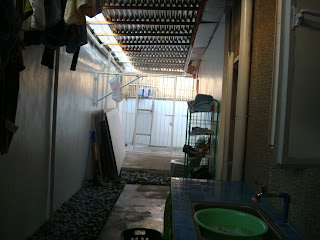 To prevent naughty thieves from no longer having easy access to my residence, my strategy evolved into a scheme to install a series of padlocked iron gates. Also, I realized that I needed to extend my side roof overhang all the way to the side wall. In other words, I needed to completely enclose my house's little side alley, from top to bottom with a roof, as well at ground level with ground to ceiling gates. Step by step, I got it done. 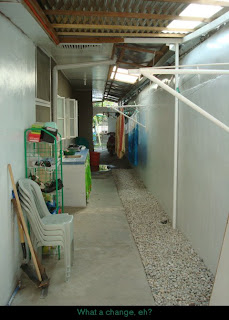 A pleasant unintended consequence to doing all that with that narrow side space is that I ended up with a very long utility room completely free from the outside elements—no direct sun, and even more important, NO RAIN. Looking to merely secure one side of my house, I now have a dry clean place where I can lock up all my tools and store spare furniture and appliances; but even cooler is that I can now hang my laundry up to dry even in the middle of the rainy season, which seems this year to have set in a couple weeks early over the past week or two. 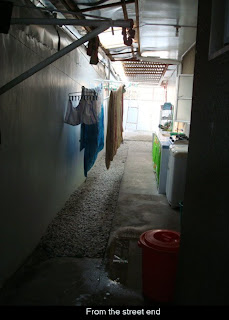 Plus, one thing leading to another, I paved the whole thing, put in drainage, two water spigots, electrical outlets, along with a sink and tile counter top. On the counter I put a gas stove and next to that my washing machine. All that in what was once a previously useless swathe of muddy alley.

Geez. I don’t have time to write any more tonight, but I’ll more than likely continue on with this home improvement subject over my next few posts. I’ve been trying to keep my mind away from the depressingly mind boggling concept that so many Americans seem to be willing to vote for BHO, at least according to the polls. Then again, I just watched “Are You Smarter Than a 5th Grader,” which always reminds me that most of my fellow citizenry evidently go through life without much paying attention. (Are so many Americans really such numbskulls?) We'll see in November. I might just have to develop one of the first cases of Obama Derangement Syndrome. Dear God, may he be a flash in the pan... If not, then give me the same strength that it took to endure 4 years of Carter and another 8 interminable seeming "centuries" under Slick Willy... 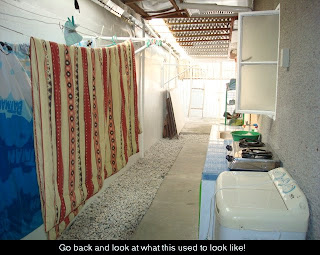 Posted by PhilippinesPhil at 3:06 AM

Wow.
That looks so great and I love making something form nothing you know? can't wait to see the other stuff your were talking about.

Okay, next post will be on my porch, a work in progress...

Phil, I have been doing with the old house here, almost exactly what you have been doing. Adding an extra separate room at the back, and then adding a roofed extension to a laundry room that has drastically reduced the sunlit area. Now work is in the interior.

We appear to share the same passion for adding our personal touches to houses lived.

Nice work on the sideyard, which is entirely missing in mine since the house practically extends to the lot boundaries.

Yeah Amadeo, I like having a place where the laundry girl can do all the washing and the clothes hanging in a place where I don't have to see it. I hate the sight of drying laundry. Doesn't sit well with the landscaping; you know?

I don't think I could survive in your house Phil. I need the wide open spaces. But from the typical houses I've been in over there, yours looks pretty well done.

I'm guessing you are in the same political delima as myself. No way you can vote for Obama and probably would have a hard time voting for McCain. I'm still not sure what I'm going to do in November.

Check out Thomas Sowell's lastest article regarding this fall's election. He's a guy that stayed home rather than vote for eith McGovern or Nixon. He's a really smart guy that sees this election as much more clear.