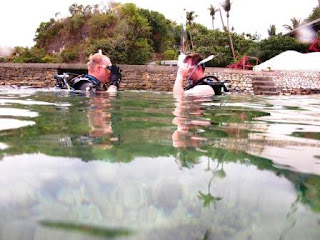 Our skin diving sessions started on the second day of our early June stay at the resort. Because two of three of us had just basic experience I suggested that we take turns diving with Don, our instructor diver, a very talented and resourceful fellow who also happens to be a mutual friend.

Jay, the other new-guy diver (aside from me) is not truly new at this stuff but he might as well be since his last dive was more than 15 years ago. I volunteered to hover about the two of them with my underwater cam and record his first foray back into the deep.

I stayed back while Don went over the basics with Jay. Don is an honest to God obsessive compulsive so his attention to detail is about as comprehensive as it gets; something that I very much appreciate when it comes to an endeavor as potentially dangerous as scuba. 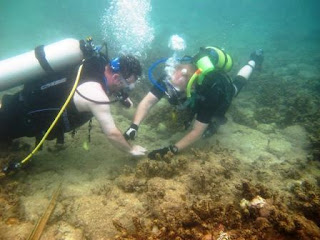 New diver Jay was dealing with a head cold same as me but his symptoms were not as controlled as mine. A stuffy head is not a good thing to have when diving. Even a few feet under the water exerts an enormous amount of pressure and the place where this is felt first and most is in the head, specifically in the ears, due to all the airways, passages and sinuses up there in the noggin area.

Considering the physics and physiology involved, it’s crucial to be able to equalize the pressures that exist inside with those outside of the head. This is primarily done by way of the Eustachian tubes going into the inner 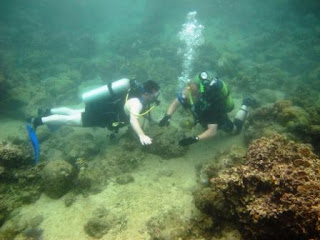 ear. Some people have wide open tubes, like diver Don, while others, like me, have narrow or occluded ones. For that reason Don is able to descend nearly as quickly as gravity and buoyancy will allow, while those with constricted Eustachian tubes have to take it slow and careful—that would be me.

It was interesting being the fly-on-the-wall as the two of them went over the do’s, don’ts, how to’s and what ifs. I was “snorkeled up” intending to use my camera to take some stills and video of them from above as they went about their familiarization dive and that’s exactly what I did as you can see with al 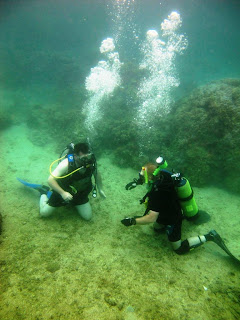 They went through some hypothetical scenarios such as what to do if the mask fogs up, comes off or fills with water. They also went through several iterations of removing and replacing the regulator from the mouth while underwater. There are all kinds of situations that would require being able to do this, none of them good; just the same, it’s too late to “try” this rather simple procedure when your regulator happens to malfunction 60 feet down. Once practiced a number of times, accomplishing all these things and more is fairly simple. Simple yes, intuitive no, therefore practice is a must.

But there is another reason for the need for practice and that reason came up the other day during my conversation with Retired Navy Diver Tom. It is his conclusion that the brain runs at less than 75% capacity at depth on compressed air. Considering his 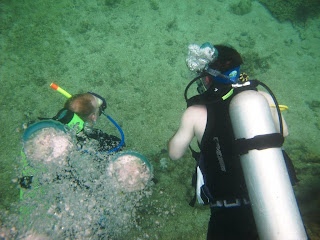 thousands of hours of diving in extreme situations that the average person cannot comprehend, HE would know. (For instance, he was one of the divers that recovered bodies and aircraft parts from the depths of the Atlantic after the 1996 crash of TWA flight 800. Interestingly, he describes being able to “taste” the rotting bodies in the water.)

So, when it comes to diving observation and commentary, I defer to someone like Tom every time. Even with my limited experiences I am convinced that there is something to what he says about diminished mental capacity at depth. And even if only partially true, an emergency situation underwater is when one would need as many of their faculties as possible, and if thinking is actually diminished to whatever level then the answer is rehearsal to the point that thinking becomes less of a fa 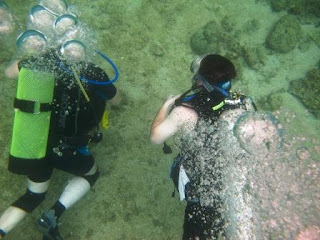 Therefore the idea is to get ahead of the problem before it even happens. Diving and flying is similar in that the safest divers and fliers are always two or three steps ahead in their minds. Pessimists like me make the best survivors since we consider every bad possibility, plan for them, and are ready to react having practiced what to do again and again, if not for real then in our minds. But, if the mind is weakened, as Tom claims, then muscle memory is the next best thing—thing is, necessarily, the “memory” must be put there first by trying, doing and perfecting. 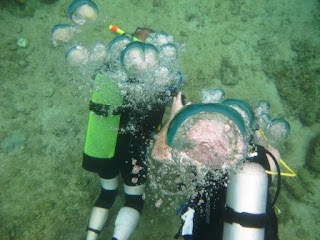 On that note, I was in the gym yesterday and ran into John, someone I’ve known casually for a year or two. Turns out he’s a diver too, from many years ago, and he’s got his own diving war story (not that I have a real one yet, knock wood). His took place 80 feet down in murk so lightless that he could not see the other 5 divers around him. It was there that he began having problems getting air from his regulator. He had plenty of air according to his gauge yet he had to suck through his mouthpiece as if the air was about gone. He con 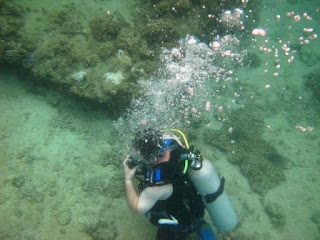 sidered changing to his spare regulator, but not being sure if the problem was the tank, he dared not go to it. He knew he could at least get some air by sucking deeply and wasn’t sure if he would have enough air in his lungs to clear the water from his mouth if the spare didn’t work and he had to go back to the partially working primary regulator. So, scared to death, he kept his problem to himself and continued sucking hard, opting to just wait until the dive master called the dive business as usual. 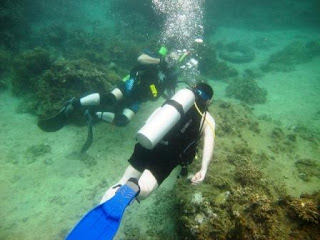 . The obvious answer was to go to another diver’s spare regulator, preferably the dive masters’, and to immediately call the dive. These things should have been discussed BEFORE the dive to include how to signal the occurrence of problems and how to maintain contact when visibility becomes a problem. For instance, my instructor had me practice the possibilities to the point that I now have confidence that I can remove and replace a regulator no matter what. I now know that I do not have to eject all the water from my mouth to be able to draw air from a regulator. I know this because I tried it. The air goes past th 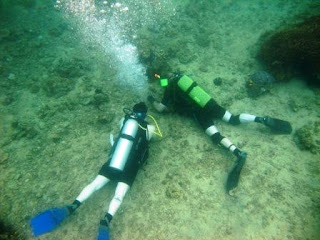 e water in the mouth and can then be easily completed ejected with the very next exhalation.

Oops. I just realized that this post could be quite daunting to someone considering trying this amazing sport. I don’t mean to because truthfully, a 70 year old woman can do it; and I’m sure there are some old ladies (and men) that DO scuba dive since it is not all that physically difficult. I compare myself to that 70 year old lady in that bodily I am very much faded out. I do not try to walk long with the tank since my back won’t allow it, and as soon as a dive is finished and I’m ready to leave the water I let the assistants and other divers help me remove the tank and weight belt since I am no longer capable of pulling myself back into the boat with all that weight still loade 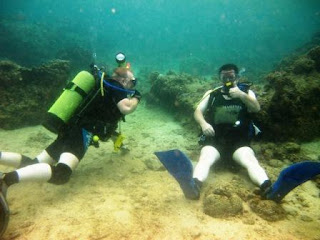 So, even with all the risks that come with scuba diving it is so awesome an experience that it’s worth every possible danger. Try it and see. The “risk to reward” is definitely weighted toward the reward!

More to come…
Posted by PhilippinesPhil at 6:00 PM

Judging by how easily my eustachian clog up with snot during a cold, I probably would have the same problems as you.

By the way, what is your camera? It really takes great pictures.

My Eustachians are about as bad as they get and yet I'm able to work through. Diver Tom also spent his entire career working with similar ones, so there you go.

Its a Canon G11. Its an amazing bit of technology. The pics I post are condensed down from 2.5MB. You should see the originals..wow. The good thing is that it has underwater mode for both stills and videos. Expensive, but worth every penny I think.