Tom, the Navy diver and a moray eel: something in common? 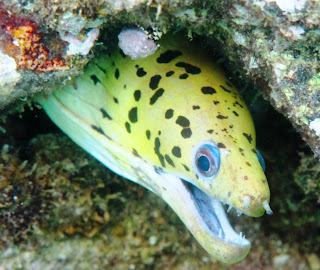 It was my good fortune to run into one of my favorite military retiree buds at the office today as he happened to be out and about. Quite the character he spent more than 22 years as a navy diver. I’m not saying his chosen profession caused his “character building,” but it probably had a lot to do with it, especially having heard some of the hair-raising experiences he went through. (shudder)

A long lull while I waited for my one and only client of the day to come in all the way from Cagayan de Oro allowed Tom the diver and I to catch up and compare notes. Naturally the one and only topic of conversation turned out to be my newfound love—diving that is—a subject that is also near and dear to his heart. Finally, after all these years we have something we can both relate to on the "shared experiences" level. 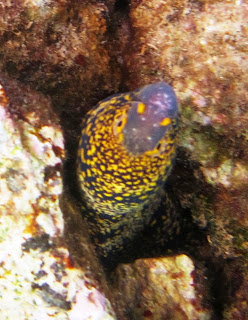 Tom, “the hard hat diver,” is not the same stern-faced fellow I met more than four years ago when he had only recently ejected himself from the navy due to his multiple maladies, all of which resulted from the extreme physical nature of what he went through during his more than two decades under the world’s water and waves. From what I’ve seen from him and others like him, if you are looking for a career that is both exciting AND debilitating, the life of a navy diver is the life for you.

Personally, I like the changes I see in him. Used to be his demeanor was off-putting to 9 out of 10 people that might run into him. Now, his sour disposition has improved so that on a good day he reaches at least 50% on the unapproachability scale. I’ve never discussed it with him, but I think three things have been instrumental with somewhat enhancing his disposition:

First, he married a beautiful intelligent sweet local girl that loves him despite his "occasional" spats of acerbity. (Ah, there’s always that! Applies to me also as a matter of fact. These 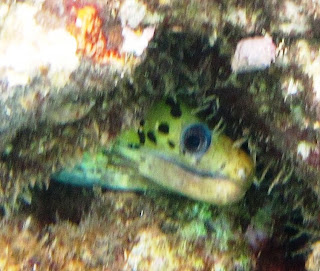 sweet girls are THE primary reason so many of us live here despite all the “other" things.)

Next, they had a little boy, something that he continuously pledged he would NEVER do in the first months after I met him. I remember well trying to explain the intense feelings that overwhelm a dad when experiencing the gestation, birth and development of one’s very own child. He laughed me off. (Although he doesn’t really laugh; it’s more of a smirk). I chuckled in turn years later when he unashamedly gushed nonstop over his own little chip off the ‘ol block. Happens every time.

And finally, as an inveterate overachiever as demonstrated by his stellar rise through the ranks in his navy career, he seems to have come to grip 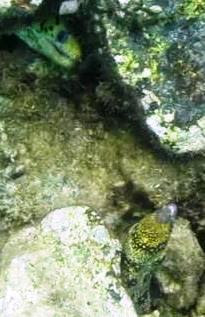 s with no longer being “in,” as well as with the bad temper that comes with the realization that the things you useta coulda do are no longer possible. People who once gloried in their physical prowess have the hardest time with that aspect of retirement from the service. But, with acceptance comes tranquility.

Ultimately, he seems at ease, even happy. Yet, to those who don’t know any better he still comes across as hard-faced and foul-tempered, but I think that’s mostly out of habit and to keep people at arm's length. He’ll never be the gregarious hard laughing puppy dog type. I don’t think I would like him like that anyway. As Popeye, the greatest seaman of all time once said, “I yam what I yam.”

Back to the diving conversation we had, it was a real treat for me to be able to describe to him some of the strange creatures I saw and have him give me some possibilities to use in a Google search in my continuing quest to identify them.

I learned today that this hard-bitten cynic is anything but that when it comes to his love for all life under the sea. I’ve been down about a dozen times compared to his decades of submerging himself hundreds of times. He describes creatures and phenomena that the average human cannot imagine even with the hearing of it. Some things cannot be well described with mere words. That’s why I got my underwater camera!

On that note, you’ve been looking at a moray eel that I happened across while snorkeling around the hotel’s pier wall made of local stone and mortar. Imagine my shock as I passed unsuspectingly within a foot or two of its gaping serpent mouth. Its ominous yellow head seemed to fill my vision 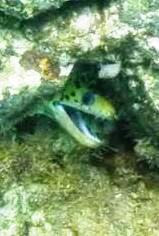 through the snorkeling mask. From sheer panic my heart leapt into my throat and generated instant bodily thrashing away from the thing.

It was only after I had a moment to gather myself that I realized that, scary or not, it was simply an eel minding its own business within its hole there in the wall. I then spotted a second eel with a completely different look in a hole only a foot or so below the first. I don’t know what species the bottom one is but the one in the wall with the gaping mouth is definitely a yellow headed moray. A quick bit of research on moray eels surprised me with the sheer number of different species. I never cease to be totally amazed with this stuff. Go here to my Youtube site to see the video I filmed of the yellowheaded moray.
Posted by PhilippinesPhil at 4:45 AM

How dangerous are those suckers? Say you were walking around in the water and put your foot someplace where one felt like it had to attack?

They aren't aggressive; but, your question is bringing on another subject for a post about exactly what you ask. Thanks Ed...