The Tall Wall & a Mighty Moray 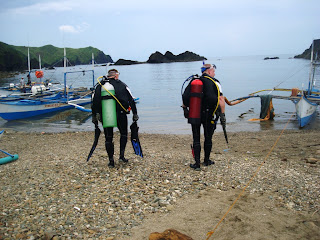 After Don had made peace with the tourism officials we continued to prepare for our first dive of the day.

It was our third day of diving, including the day we had arrived when we had explored the barren waters just around the point from the eastern end of the Claveria beach.

Our plan that day was to dive one more time in the canyon region, (the labyrinthine area I’ve been raving about in my last few posts) which is made up of a confluence of ravines and fissures, interspersed with gigantic boulders and slabs. We just could NOT get enough of that spectacularly whimsical spot.

By then we knew that the Claveria canyons have way too much to see in just three dives, but three is all we gave ourselves since we still had the entire western side of the lagoon yet to explore; not to mention some intriguing possibilities that we’d learned about from some of the locals. They told us of some promising sites just down the coast to the west. They described very deep waters right along the coastal wall with lots of fish, while others mentioned underwater caves and tunnels. It all sounded too good to be true. 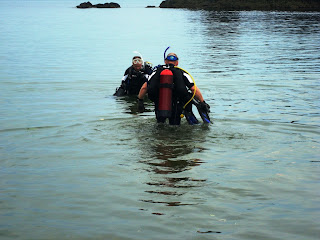 Just hearing about those kinds of adventurous possibilities made us crazy to check them out. But even if all those extraordinary prospects didn’t pan out, the expedition so far was more than meeting our expectations. Yes, the long drive to Claveria had been WELL worth the effort.

The first dive went fairly smoothly except that a head cold I’d been staving off with decongestants was nevertheless getting the upper hand. The meds kept away the drips and stuffiness; just the same, my inner ears resisted equalization. No matter how hard I held my nose and blew, it wasn’t pushing much air where it needed to go behind the eardrums.

Therefore, I had to make depth at a very slow pace; otherwise the pressure behind my eardrums was excruciating. And once I WAS equalized at depth I was forced to ascend slowly as well, to give the pressure some time to leak back out the other way. I needed Sudafed, but that particular brand of superior decongestant is very difficult to find in this country for some reason. 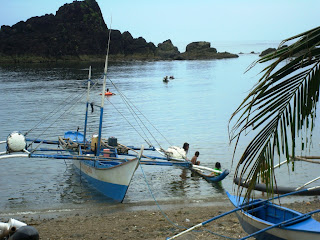 We came up after about an hour, once again chattering happily about the majestic beauty of those incredible canyons. By this time the Claveria tourism official was our buddy. He and several others were very curious about what we were seeing out there. However, it’s difficult to describe something like that. We did our best by using lofty words like wonderful, gorgeous, and stunning; but it just doesn’t do it. Even my pictures and videos don’t do enough to capture the scope of the splendor just outside the lagoon entrance.

On our second dive, for the first time ever we angled toward the left side of the lagoon inlet instead of to the right. An underwater channel extends deeply almost into the middle of the lagoon. We found it from the surface using our masks and snorkels, then we followed it on out to the sea. 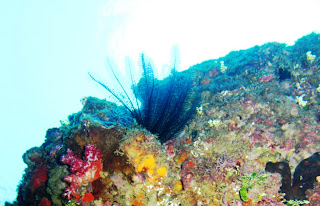 Even before leaving the confines of the lagoon, the deepness of the channel provided items of interest at which to gander. Geologically speaking, the sight of the channel way below is itself interesting. It’s easy to see that it’s either an ancient river gorge; or it is a place where flowing lava had deeply cut a channel out to sea. Either way, it was formed a LONG time ago.

Concerning the channel still, the other interesting sight is the continuous flash of fish along it; it’s a veritable fish highway in fact, relatively large ones too. As it gets deeper, towards the lagoon perimeter, the fish in it become more profuse, diverse and larger; although it’s difficult to tell exactly how large since by that time the bottom of it is more than 30 feet from the surface.

Fishermen obviously are aware of this congregation of fish; several times I witnessed boats, three in a line, dragging their nets deeply through the channel right into the lagoon. We took mental notes of this knowing that we could easily be hurt or killed if we got caught up in those dragging nets. It’s one of the dangers we knowingly put up with, diving in places where no one else ever does it. 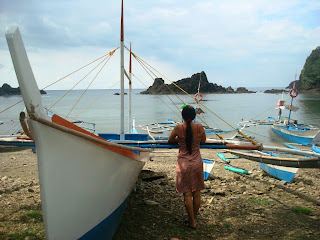 When we reach the base of the little islet forming the western side of the lagoon inlet we know we are into something special. Inspecting it from the water we are able to see what is both above and below the surface. It reminds me of what they say about ice bergs, that what you see is ONLY the tip of it. It is massive, the amount of rock BELOW the diminutive island protruding above the water. I couldn’t even see all of it because the bulk of it is hidden from view where it drops off a shear edge to the north.

Don makes for the sunlit edge and immediately drops below it out of sight into the eerily dark blue waters far far below. I don’t realize how far until I also reach the precipice. I’ll NEVER get used to that feeling, swimming out over an area where suddenly the bottom is SO far below.

For a second I forget that I am not about to crash to my demise, that I can hover right there, like an ethereal spirit or a wispy hummingbird. My heart always races with the thrill of it, as if I’m cheating death. I follow Don over the edge with camera in video to make the short clip that can be seen in the YouTube embed below.

My inability to quickly equalize causes me to hang high above Don for quite some time. Necessarily in slow motion, I gently drop to ever deeper depths. I let my ears get used to the increased pressure, head cold and all. I drift down the side of the steep wall closer and closer to Don while watching him explore under every rock and in every cranny 50 feet below the waves. 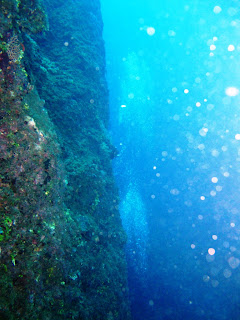 Strangely, by the time I make it down to him we have lost much of the earlier brightness from above, and it happens seemingly in seconds. At first I think the gloominess is from being so deep at the bottom of what amounts to an underwater valley, the sheer sides of it towering high above us perhaps blocking out the sun. But no, craning my neck to look at the surface I can see that it is at least three or four shades darker up there and becoming more so.

I don’t know what the deal is but there is hardly a bit of coral or sponge growing in and along the sides of that gorge. There IS a nice bit fish life, but once again, it is few and far between. We can find it but we must look hard to spot it.

Don and I separate to do our own individual investigations of the area. The next time I glance toward him though, he flashes me with his spotlight. You can see it in the video below. That’s our signal for “come over here!” which I immediately do. 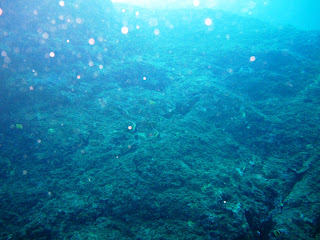 Approaching up through a gap in the rocks I see that he’s checking something out way up inside the recesses of a tiny cavern. Not knowing what he’s got for me I carefully push the camera into the hole’s entrance.

He’s got something lit up way in the back. At first, to me, it looks like a moving lump; but then I see a head with a mouth and beady eyes, then a very thick neck with a very LARGE bit of the rest of it visible that it has not been able to push back out of sight.

It’s a huge moray eel, the biggest I’ve ever seen. Don says when he first came up on the eel its head was protruding from its burrow and that’s how he spotted it, but when he moved in for a closer look, it retreated as deep as it could go. The middle of its long massive body is almost as thick around as my thigh.

With a happy nod and some okay signs flashed at each other, we continue our journey of discovery and separate once again. The darkness was becoming more noticeable. Suddenly, a bright flash pops off like one of the old-time flashbulbs. I look over at Don about 30 feet away thinking he is spotlighting me again. He is looking at me too but with no spotlight. We carry on with our examinations but stop again when the bright light flashes us once more.

‘What the heck was that!’ We look at each other thinking the same thing. 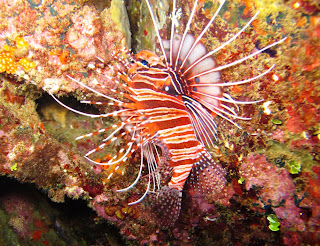 It happens again, for a split second starkly lighting up everything in the gloom around us. Now we know what it is—a thunderstorm is passing overhead with lightning strikes every few seconds. It’s comforting knowing that all that menacing rain and thunder way high above in that OTHER world has nothing to do with us.

Eventually though, when our air pressure approaches and then surpasses the red markings, we have no choice but to return to the land of the air breathers. Leisurely rising up the wall toward whence we came, we get back up to a depth of 20 feet. From there we look up and see raindrops heavily splattering the surface above; we can even make out the distant hiss they make. From down there it sounds like static from a far away radio. 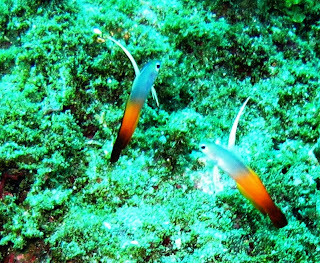 Finding the lagoon inlet channel again, this time we follow it quite a ways back in, almost to the center of the lagoon. Somewhere in the middle of it with only about eight feet of water above us, we listen for the sound of boat engines.

Determining there are no boats about to bear down on us, we surface into a markedly differently world from the one we had departed only a little less than an hour before. The sun is gone, replaced by low dark clouds heavily dumping sheets of rain on everything around, including us. Luckily the bolts of lightning are striking miles away. The storm doesn’t dampen our spirits any; once again, we are ecstatic over what we have seen. 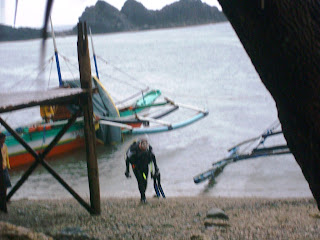 Before making our final swim and wade in to the rain drenched beach, I make a final remark while standing in the shallow water over to my dive partner:

“Dude! That was amazing! We have GOT to go back there again!”

And we would. The only problem is that our next dive was going to have to wait since we had just used up the last of our filled tanks. The next day we would have to find a place to get them refilled, hopefully back up the coast to a dive resort called the Terra Rika in the town of Pagudpud. 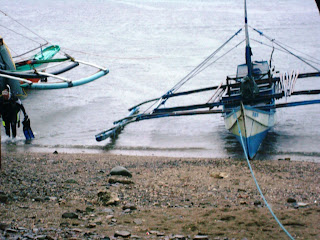 More on that little endeavor in the next couple of posts. . .
Posted by PhilippinesPhil at 5:47 AM