Bohol Trip: Loboc, A Tale of a Bridge vs a Church 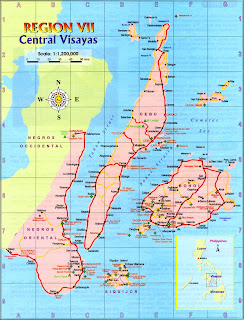 If you visit ’s Chocolate Hills from Tagbilaran you will pass through Loboc. Even if you hadn’t planned on it I’m sure you will end up checking it out. We stopped there on the way through and again on the way back. It’s a pretty remarkable place for such a little town, and there are several reasons why—at least four that I can think of. But the initial reason is the first thing you’ll notice as you pull up to the center of town.

Have you ever seen something so bizarre, so surreal that you just HAD to have an explanation for it before you could go on with what you were originally doing? It probably feels that way for someone who sees a UFO or The Lochness Monster. Well, THAT is how I felt when we pulled up next to the ancient church in Loboc. The church was old, large and interesting, but that wasn’t what had my curiosity all abuzz, although it was certainly part of it.

No, what had my head cocked and my gaze locked was the hulk of a big old unfinished bridge looking like part of an abandoned movie set. Ever watch the movie “Speed” when the bus jumps across the unfinished chasm of an overpass? Or similarly in “The Blues Brothers” where the Nazis chasing Jake and Elroy go flying off the same kind of unfinished highway bridge? Well, that’s what’s sitting in Loboc, right in the middle of town. But, what makes it unreal is the bridge’s location.

The incomplete bridge comes from the direction of the , which it crosses from way on high. This isn’t just a little bridge either; it’s substantial, made of concrete and reinforced with steel, and was obviously built as part of a major thoroughfare. What’s disturbing is that if the bridge is finished, the would have to be demolished, because the bridge stops directly across the street from the historic cathedral. Visually, the unfinished bridge is an open threat aimed directly at the church. So far, the church 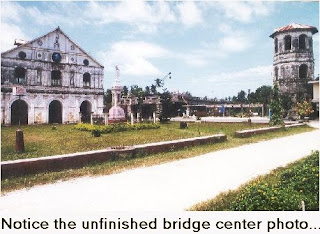 is holding its own against the menacing bridge’s bulk, but a question begs to be asked: What the heck is going on?

I got out of the car, stared up at the bridge, and while pointing at it started quizzing the guide about the monstrosity across the street from the beautiful church. I must have been a bit too obvious for her because she told me furtively, “Not here, we can talk when we get around the corner.”

So, I figured out that I wasn’t supposed to make a big deal out of the bridge and the way it just seemed to float unfinished in midair looking exactly like a giant waterless pier, at least not openly, so I pretended to ignore it as we walked to a garden park in front of the church. I felt foolish ignoring something so obvious, but I decided to play along. By then I was willing to do about anything to make sure my guide filled me in on “the story.” I knew it was going to be something weird and wacky and I was right.

Here’s the tale she told me. It seems unbelievable, but it makes sense if you live here long enough. There is a legend that there is gold buried under the old church. It’s the same ridiculous myth that the people in practically every province in the tell. Usually it’s a story about buried Japanese gold, but in this case it must be about Spanish treasure from the time when the friars first moved to Loboc in the early 1600s to escape marauding Muslims. That’s why the church exists in Loboc in the first 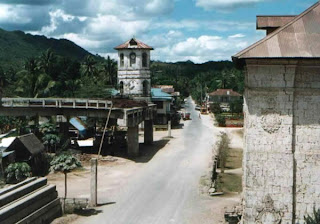 Some greedy person in a position of authority (sorry for being redundant there!) must have felt that they could use “Eminent Domain” as a way to force the demolition of the 400 year old landmark to get to the mythical gold. That’s all she would tell me and she spoke of it without looking at the bridge or acknowledging it, almost like she was briefed as part of her certification not to make a big deal out of it when tourists ask about the obvious eyesore right in the middle of Loboc.

Sure enough, while doing some research on the internet I inspected a road map I found of Bohol. I've included two maps in this post; check them out. The map above (click on it) shows a major road going from Sikatuna to Loboc from the direction of where the bridge now sits fallow and it also shows the road stopping, evidently from the point where the bridge stopped. I found another map (click on it below) that shows the road continuing to just west of Lila, so maybe that map represents a proposed continuation or a presently unimproved section of the same road. 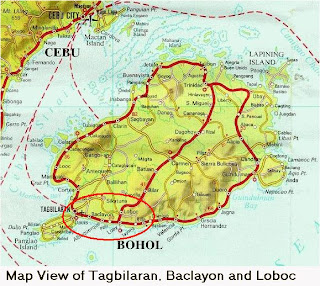 The story and the guide's way of dealing with it is very Filipino, and I say that with a combination of affection and humor knowing what I have learned of the national psyche here—one that is certainly unique:

(Foreigner: “Hey, why is there an elephant in the kitchen?” Local: No explanation—just a pleasant smile and a studious disregard for the question.) That is this place—it’s not good or bad—it just is. One just has to smile and enjoy the occasional absurdity.

I don’t know the rest of the story and I still have a zillion other questions such as: Why did they not finish the bridge and go through with the razing of the cathedral? Who were these dastardly people? Who stopped them? What’s the story behind it? What are they going to do with the bridge now, if anything? Will they eventually move the church or knock it down to finish the bridge? Or, will the bridge come down? One question leads to another.

Is the story about the greedy bridge-building gold-diggers even true at all? It must be, because in a place so devoid of money for public projects nothing else could possibly explain why an expensively massive bridge would be built right up to the edge of an important building 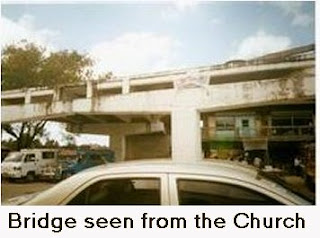 like that. I mean, no one builds most of a bridge before noticing too late that there just happens to be a large church inconveniently in the way, not even here. You must admit that it’s a wild story. So wild in fact that if you didn’t have visual proof of the Mexican standoff between that big old incomplete bridge and the equally impressive church then it’s not something you would even consider likely. But the photos don’t lie. If you see it, you have to believe it—right?

There’s much more to Loboc than this amazing “the bridge versus the church” story. I’ll post more on this quaint little town soon…

Posted by PhilippinesPhil at 3:23 AM

I happened to be checking my dead blog folder and behold, it seems like one has risen again from the ashes. Welcome back Phil.

I'm like you in wanting to know the rest of this story, especially on how the attempt to raze the church was stopped.

Glad to have you back. I missed your presence.

As a local I haven't really heard of any concrete reason why they built the bridge on that location knowing that there is an old historical church. It's also foolish enough that they made a poor decision or poor planning and development. I was 6 years old then when the construction was started, but even as to now, I haven't really heard or learned any good reason of why and how they arrive to that decision.

But looking through old photos available in the museum, there was once a floating bridge that was situated exactly where the unfinished bridge is. So, maybe that's the reason behind the controversy. But again upon digging to the towns history, rumor says that during the Spanish era, there was a tunnel that goes from the church connecting to the belfry and to the old house where once used as a municipal building during the Spanish time and was once used by the Japanese during their occupation in world war 2.

Though we never heard of any looting during the construction of the unfinished bridge (discrete maybe) but there were talks of a local that was able to dig some treasure and now owned a construction firm in Bohol.

Interesting perspective from someone who lives there. Thanks!