My Little Trip to Bohol

I made a trip to a few weeks ago. I spent just 4 days there but what little I saw impresses me. Of course compared to where I live now almost anywhere else in the , impresses me.

We flew into Tagbilaran, the provincial capital. Its airport is typical of all domestic Philippine airports—tiny, but plenty big enough for the new Pacific Airbus A320 and A319. There’s a reason Cebu Pacific seems to be competing so successfully in the domestic air travel market. Their planes are new, well-kept, and the crews are very professional. Even better are the low fares, as long as you book in advance. Don’t try to show up same day and get a ticket though; you’ll pay double.

The flight from was around 90 minutes. From the air, looks to be mostly hills and sparsely populated. On the approach to Tagbilaran it seemed as if we were about to land on top of buildings, which continued to flash below almost right up until the moment the landing gear hit the tarmac. After collecting our luggage we made a deal (for 100 pesos) with one of the many van drivers (and taxis too for that matter) to take us on a tour of the hotels so we could pick one. The first stop was the Vest Pension House, only about ten minutes from the airport and it turned out to be good enough. We checked in. It’s not 4-star, but for the money it is plenty nice. I recommend it.

After check-in we scooted out to the nearby mall (a ten minute drive), one of two in “Tag,” or so I was told. It seems every city of any size these days has a mall, and usually two or more. I call it the “malling” of the . Funny thing about this country is that there isn’t a whole lot of industry in evidence, but there is plenty of shopping. A 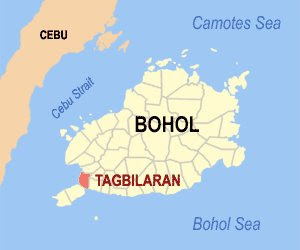 lot of us expats often wonder where the multitude of shoppers you see at all these malls get their spending money. Most of us imagine it comes from the thousands of overseas foreign workers (OFWs) sending their collective millions back home. Interesting how the president crows how her economic policies have lately made the peso stronger against the dollar. Puzzling, since it means the money coming in from the vaunted OFWs has that much less buying power here.

I hate malls; I hate shopping; so happily, after less than an hour, we were out of there. It was still only late afternoon so we had the driver take us out to look up Paul Bruno, an ex-pat who moved to Bohol from Angeles City out to Panglao Island, a place known for its beaches and diving resorts just down the road from Tagbilaran and across a causeway. Paul, a retired American GI, got tired of the Angeles City rat race and started up a delightful little pizza restaurant called the Powder Keg.

We found the Powder Keg well towards the end of Panglao just up from one of the resort areas at a “Y” just about at the end of the main central road. Paul welcomed us warmly and we sat down with a half-dozen of his buddies who also form part of his customer base. He said he had taken what was once a rundown building, fixed it up, and developed a successful eatery niche specializing in American style pizza (and other fare) and drinks, all at less than resort prices. The pizza was tasty, the setting restful and affable while the lower prices seem to make his place all the more appre 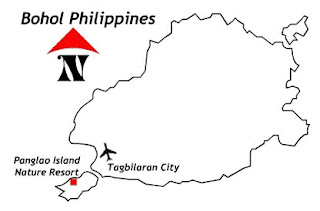 ciated by resort-goers looking for prices lower than those on the beach. Now, a community of American and Aussie retirees is developing their own little ad hoc expat subdivision, and according to Paul, life is good. As darkness crept in I regretted having to head back to Tagbilaran.

Tagbilaran is hilly just like much of the rest of what I saw of . I suppose you could call it the of the except it’s not as attractive. Nope, not even close. Like most places here there is very little money for aesthetics. Personally though, I wish they’d find some, especially if those in charge are serious about making this country competitive in the tourist market. Oh well, just a thought. The way it is now, if you want beautiful visuals you have to get out of the towns and cities and head for the hills, countryside and coast; although I hear Vigan is beautiful. It’s on my list of places to see.

If you find yourself on Tagbilaran streets these days prepare for a bumpy ride. They are in the process of resurfacing the entire city and according to a local they have an awkward piecemeal system of doing so. The geology of that I observed is basically million-year-old coral raised up out of the sea into a 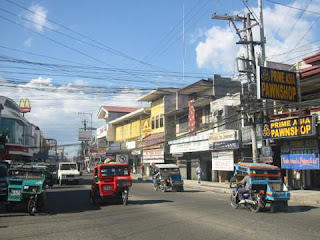 myriad of hills. When the crews strip away the old concrete and asphalt down to the coral it makes for a decidedly rough driving surface. The problem is that the follow on road construction crews can take a long time (by non-Filipino standards) to get to those rough patches. Traffic has to slow way down over those areas, which makes for traffic snarls in a place that really shouldn’t have them. Probably the only people who complain are outsiders (like me), since I’ve noticed that Filipinos never complain about anything. (Why can’t I be like that?)

Okay, enough of the typical American style complaining. I really like and Tagbilaran. Although the capital city is not exactly enchanting, it is a nice place with pleasant people and I’m told it has a low crime rate. The province is a very conservative, traditionally-oriented place, even by If you know me then you know how much I despise the “hip-hoppization” that has befallen the states, which has steadily eroded its mores and values. To me it seems that in general these days, people back home can’t speak without spewing profanity, everyone is angry, and MTV has over-sexualized our kids by the time they learn how to operate a remote control. I live here to get away from that stuff and Bohol seems even further from it.

And here’s an observation some might find interesting: I’ve never met a girl from in any of the bars on . I’m sure there are some; I’ve just not met any. And since ALL I do when I barhop is to ask the girls mundane questions, that’s usually one of the first I ask. Whatever that says about the young ladies of I’ll leave to the reader to figure out.

I’ve got more to talk about concerning my trip to , but I think I’ll go ahead and post this now to keep the length to a “sub-novel” level. (Have a good one!)

Posted by PhilippinesPhil at 1:43 AM