A lesson in chicken catching

I feel my best in the early evening just after the sun goes down. I’m definitely not a morning person; I’m more an end of the day kind of guy. That's when the aching joints ache the least and when I have the most energy.

This evening during that "good time" I was outside enjoying the cooling temperatures with my girls when they rushed up to me with their typical preamble of "daddy, daddy, daddy!" Tugging at my legs they begged me nonstop to play hide 'n seek. Lately, they seem to be on a hide 'n seek binge; they just can't get enough of it. I never actually say yes, I just cover my eyes and start counting, “One, Two, Three…” As soon as I begin the countdown they scream in delight and scramble away to hide in a trail of little girl giggles.

I let them go until they are out of sight behind a corner of the yard or on the other side of the kubo and then I give it the old, “Ready or not, here I come!”

My oldest girl is 6 the other is 4. At that age just about every response and reaction involves tons of giggling and heaps of screaming. I love doing my part eliciting it. When I find them in their obvious hiding places I make a tiger noise, “Arrrrrrggggh! THERE you are! I found you!” causing a joyous chorus of more happy screaming. I love it; they love it; we all love it!

After a half-dozen rounds of that my 6 year old pointed at the far side of our walled yard at a young rooster that had found its way in through the bars of a side gate. I called for my wife’s nephew to come and scare it away. I hate the fact that its even around since we have park rules forbidding chickens, but like most rules here that one is ignored by many.

My nephew works for me as a houseboy. He’s 20 without an ounce of fat on him. He plays basketball for hours out in the street just down the way from us. I don’t think I was ever as slender as he is. He should have captured that bird no problem, but all he did was fruitlessly run it around the yard.

I’d just watched a TV show about a Michigan family from Traverse City trying to fit in with a family out in the wilds of Guyana and the two teenage suburban boys from my home state had tried to catch a rooster for dinner. They couldn’t. Finally, a young local girl hardly in her teens snatched it up, making it look easy.

When I interviewed my father about his growing up years on the farm back in the 1930s he told of how his grandma would send him and his brothers out to catch a rooster for chicken and dumplings. Here’s the excerpt:

Now, unlike my father I’ve never tried to catch a chicken, so I thought I’d give it a shot before I get too old to try. I told my nephew to stop chasing it and get out of the way.

I could clearly see that quickness wasn’t going to do the trick, but I figured surely I am just a little smarter than a bird. I set about my work of rooster catching with the idea that I would just use my human smarts against the rooster’s wildly desperate instincts to self-preserve.

I approached it from 20 feet away with it doing that bobbing-headed chicken walk up against the far wall. He had trapped himself basically into a corner of the yard. I decided to use it to my advantage. I held both arms wide apart waving my left one while also sidling slightly in that direction as I moved forward. This caused the bird to continue to move to my right toward the northeast corner where our Blessed Virgin statue in her bathtub grotto stands. The nightly candle was already lit and glowing at the statue's feet.

I continued to move slowly, always using my fluttering left hand to make the rooster move toward the Virgin in the corner. When the bird was in front of the statue with me only a few feet away I started using my right hand to prevent it from getting past my right where it was now trapped against the wall. Now that it had reached that wall it could no longer move right, so instinctively it wanted to bolt back to the left. I had moved to within three feet of the frightened thing and was bent as low as my back would allow. As it made the bolting move to retreat to my left I snapped my left hand fingers without moving my feet. That made it reverse back and forth in a two-foot track while I inched ever closer, always with arms stretched wide and low.

When the rooster knew it had no where to go and was about to be grabbed up by me, it made its great escape attempt in a final furious flurry of feathers and clucking past my right side. I took one speedy step in that direction and brought my hand down on it catching it by a leg and a wing. I had it!

‘What’s all the fuss?’ I thought. ‘This chicken catching stuff is a piece of cake!’ 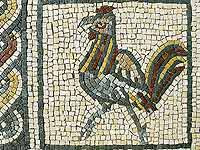 I carried the game little fellow down the street to its owner, but before doing so I told my housekeeper who also cooks that next time it came into our yard to call me, “…because next time, I want you to pluck it and turn him into tinola!”

She laughed nervously, knowing that I was completely serious. My girls just thought it was way cool that their daddy could catch a chicken when their kuya couldn’t.
Posted by PhilippinesPhil at 1:31 AM

Excellent story. It reminded me of my times in the Philippines and the absolute lack of a need for alarm clocks since there are roosters everywhere.

It also reminded me of my own chicken story that I blogged about a long time ago.

Crowing roosters drive me nuts. Death to them all!

I read your Rufus story. Good one...

This will be the last time I post anything until sometime after I get back to the states. My flight leaves in 7 hours from Manila.

Have a good trip.

Good you were able to show your girls that (some!) humans are more intelligent than chickens.
Happy trip!

Hi guys, I made it thanks. Quite a culture shock coming back here.

Hi Sidney, I think I might have got a little lucky or found a young inexperienced chicken to catch, so the jury is still out on that one.

So you are back to your old familiar haunts. Enjoy family and the beautiful sights around Michigan.

Might plan to visit Waterford before the year ends.

ahaha, that should become a country fair ground entertainment... kinda like hog tying, there should be "chicken catching".

I love tinola! hahaha. One with sayote not papaya.