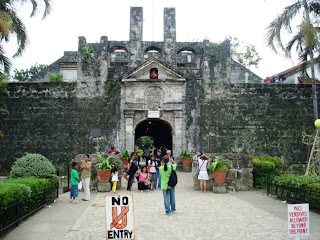 Cebu City’s Fort San Pedro is a mixed bag for me. I love some aspects of this very old citadel, but as a purist I was also disappointed, actually very much so.

On a much smaller scale, the entrance to this ancient Spanish stronghold reminds me a lot of the gate into Fort Santiago, which is another much larger Spanish fo 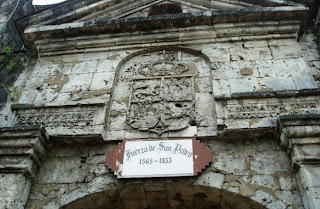 rt located inside the walled Intramuros area of old Manila. Legaspi was responsible for the building of both forts. Under his administration in the late 1500s both were first built with log palisades and then rebuilt with more permanent thicker walls of coral stone. 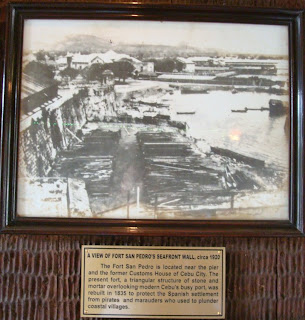 I’m certain that when I visited Fort San Pedro back in 1985 there was still a view of the sea from high up on its ramparts. During my recent tour of it however, as I rambled along the top of its walls, I was confused, wondering if this was the same fort. I asked one of the engaging guards, who also acted as museum guide, if t 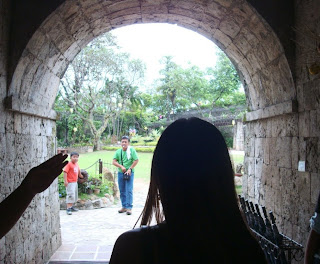 here wasn’t another fort in the city, one that overlooked the sea. He didn’t know of any. Was I imagining things? Had the 24 years since my last visit really wrought such visual change?

Unless my memory is completely skewed, the last quarter century has not been kind to the view now afforded to those looking out from the fort’s refurbished parapets. In a word, it’s crummy. In another, it’s a shame. 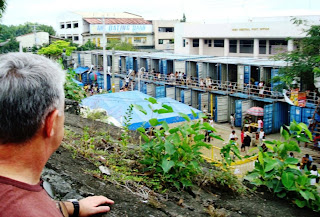 I suppose it could be said that a similar “tragedy of progress” has happened to Fort Santiago in Manila, but not completely, since although Manila Bay is no longer observable from any portion of it, and probably hasn’t been for a century, at least it still overlooks the Pasig 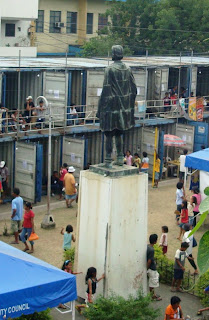 River, as it always will.

On the other hand, Fort San Pedro now overlooks nothing but unremarkable buildings (at best) on what was once its seaward side, while on the entrance side all one sees is a ramshackle park with lots of ongoing construction.

Even worse, just outside of an entire wall of the fort, the city has allowed what looks to be squatters to move into a double stacked row of unsightly metal shipping containers, the 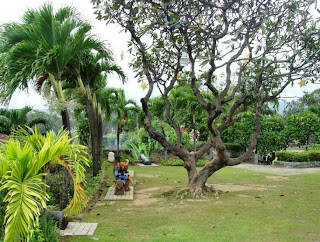 sort loaded onto container ships and pulled by trains and semi-trucks all around the world. This unattractive display is fully visible from what I believe to be the southwestern wall of the fort. At the foot of this same wall also happens to be where a statue of Miguel Lopez Legaspi stands; at least I think it’s him. I don’t know for sure since I didn’t feel like 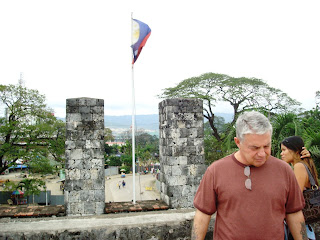 venturing down into that area; it just didn’t look all that tourist friendly.

It’s strange and unlikely, the sight of this bronze rendition of the Spanish Conquistador who was also the first governor general of the Philippines, towering way up there on his platform, now apparently the lord of the squatterdom to his front.

So, I got the bad part out of the way, that being that the City of Cebu has squandered a wonderful opportunity for what could have 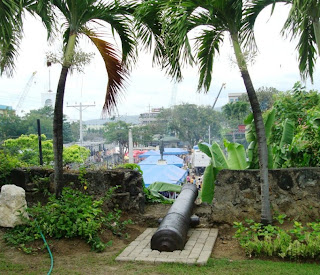 been a real draw for the city. Instead, with its very unattractive, if not ugly surroundings, Fort San Pedro is only slightly remarkable as an attraction to outsiders.

The plight of Fort San Pedro’s “uglified” surroundings brings to mind (to my mind anyway) that most Philippine towns and cities of any size do not do their “waterfronts” very well; and that is a huge shame, and a very real economic lost opportunity for sure. I say that because most foreign tourists (like me) love the sight of water, and seek it out when they go sightseeing or look for restaurants and shops. Other than Manila, along its Roxas Boulevard, I haven’t been to any other large city here that has developed its waterfront for anything 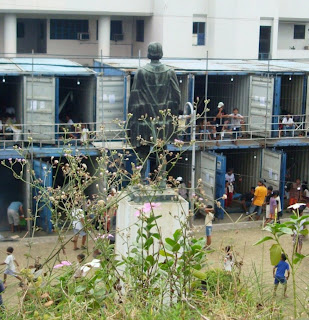 other than industry. I’ve been frustrated in this quest for an aesthetic waterfront at every coastal city or large town I’ve been to so far.

Even Manila needs to get with it—last time I walked along the bay side of Roxas I had to hold my nose to keep out the stench from sewage floating in the water below the seawall. I have no idea how anyone can possibly eat in the seaside cafes along its sidewalk. I had meant to try one, but opted instead to walk across the boulevard to an inside restaurant away from that nasty smell. 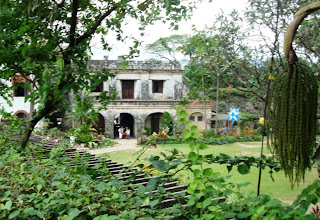 nside Fort San Pedro is another matter, a delightful one in fact. In the shaded tunnel-like entrance is a very well done set of display photos and placards explaining and showing the history of the place. I looked longingly at the pictures from long ago showing the fort with water lapping almost right up to the base of its walls. If only it still looked like that!

At one time, several decades ago during one of its earlier lives, the fo 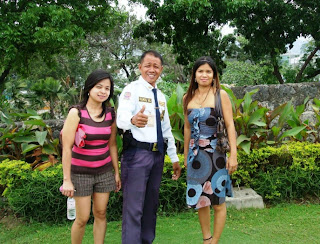 rt was turned into a small zoo; during another period it was used as the site of a city garden club. The Spanish, the Americans and Japanese all apparently used it militarily, and even Filipinos used is as such for a short time just after the Americans had evicted the Spaniards. It’s 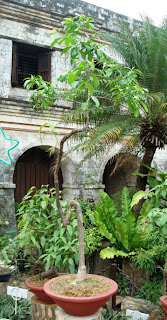 also been put to use housing government administration offices as well as a school building for a time.

Reading the history of the 400 year old fort reminds me of The Alamo in San Antonio, another old Spanish edifice that was used in all sorts of ways before settling into its final role as a national shrine.

I applaud the current managers of Fort San Pedro’s grounds in the excellent job they’ve done maintaining its garden-like features. I love plants of all kinds, great and small, colorful or not; and that’s exactly what you get as you walk through its lovely inner courtyard and along its wide stone ramparts. I took a l 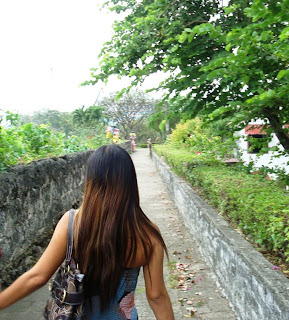 ot of pictures of a lot of plants and flowers, as you’ll see in my flickr set of the fort.

I was also pleased to see that apparently many of the original Spanish cannon are still on display on the walls, although now only the huge barrels are left, minus any wheels or carriages, and forlornly propped up on their o 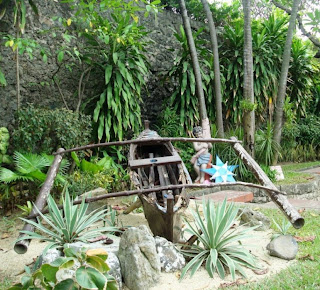 Driving away from the fort, we asked the driver about the odd looking deep pit-like construction going on not too far from its inland side. I was 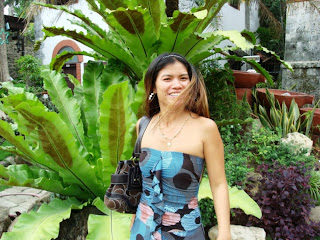 surprised when I believe he told us that it was a subway in the making. Unless we misunderstood him, I don’t know of any other subway in this country. The public tram in Manila is all above ground. I’ll have to do some more sleuthing on that one. 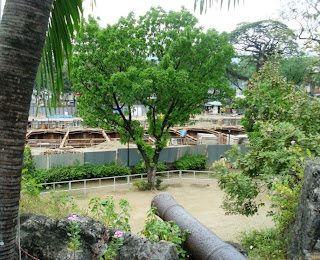 Posted by PhilippinesPhil at 2:49 AM

I always thought shipping containers would make a cheap home should one lose your job and house. But I certainly want to have to look at one everyday either.

Discarded shipping containers make for good and lasting housing if the environment is right. I have seen them converted into some kind of mobile homes, but in highland areas. In the lowlands which are very hot and humid, living in them would be an ordeal.

Even in Mindanao, the use of these containers are everywhere. Even regular ferries use them now. Thus the possible abundance of discarded ones.

Yes, I'm sure they make great living containers. And look how great they look stacked up directly across from a supposed tourist attraction. (sarcasm, in case you missed it) I find it absolutely wacky, to see them there directly across from the statue of Legaspi. Hello!?!

We have a guy working at our church named Jojo Concepcion and we are wondering if it is the same man you had problems with. We are in Phoenix Arizona. He has a CD out at this link:
http://cdbaby.com/cd/jojoconcepcion

Is there a way that you could identify this guy?

We have a feeling that there is something "off" about this guy who claims he is filled with the holy spirit. We know he is full of something...thanks!

I really couldn't tell you if its the same fellow or not. The picture is at an odd angle. Anyway, my JoJo's shenangigans took place about 4 years ago now. Even if its the same guy, if he has found redemption, then I'd give him the benefit of the doubt. I wouldn't like to say that I can look into someone's soul and say what's true, but you could ask him if he's from Pampanga, Angeles City to be exact, since the foul mouthed fella that I wrote about is evidently originally from here. Also, find out if he hails from San Francisco. I would say that if those two things can be confirmed then he's probably the same guy. I wish I could be of more help. If he is the same guy, be careful; he's probably unstable, "saved" or not.

cebu's port san pedro is one of the most important historical landmark in our country..
it was built during the spanish era
visit http://rencalago.blogspot.com to see some pictures of port san pedro.
great post