Beyond a Reasonable Doubt; liked it until the last spoken line, and then DESPISED it! 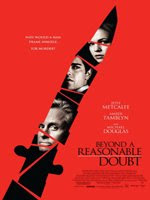 I had never heard of this movie until checking out the local Robinson’s online movie list the night before. Of the four films offered today this one looked the most attractive. Michael Douglas, a favorite actor of mine, is in it, so I figured, ‘what the heck, let’s check it out.’

The TV CSI shows have ruined a lot of the latest “whodunit” movies for Hollywood. I say that because the CSI series has raised the bar so high that it’s now difficult for the big screen versions of crime solving fare to measure up to what used to be the inferior little screen form. I must report that this trend continues to hold true in the case of 2009’s Beyond a Reasonable Doubt.

The contemporary adaptation of this film stems from one originally done in 1956, the year before I was born, starring Dana Andrews. I can’t remember having ever seen it so I can’t compare them, but I’m going to bet myself ten bucks that I will like the earlier one more. Why? Read on…

I didn’t used to be such a fuddy-duddy, but I love the old 50s movies for their decency; generally, they lack profanity and do not include nudity and sex. A well done fully clothed clinch or two and some soulful kissing is plenty; I don’t need the distraction of sweaty naked bodies grinding away on a bed, which is what you’ll see too much of in the ’09 film. But that’s just the 52 year old conservative me speaking I guess.

The plot is simple. A young reporter, C.J. Nicholas, from Buffalo New York, now trying to make it big in Shreveport Louisiana, suspects that the district attorney’s perfect streak of 17-in-a-row murder convictions is just too good to be true. The ostensibly corrupt DA, played by a weathered Michael Douglas (how old is this guy now anyway?), is setting his table for a run at the governorship. C.J. sees what everyone else doesn’t, that every guilty sentence has resulted from last minute DNA evidence, while the rest of the evidence is completely circumstantial.

C.J. is a user. First, he manipulates Ella, a doe eyed assistant DA, into falling in love with him so he can make use of her position in the DA’s office. She sees an award on display in his living room for a documentary he had made back in Buffalo about a young black female drug addict living and dying on the winter streets of ice cold Buffalo. She watches a copy of the documentary and is struck deeply by its sad humanity. C.J. has completely reeled her in.

Then, C.J. comes up with an idea to trap the dirty D.A.; he’ll document himself framing himself for murder. Ultimate user C.J. talks his TV cameraman friend, Corey Finley, who also happens to be C.J.’s fellow news worker, into filming every step. The idea is to use that day’s newspaper in each shot to prove that each piece of evidence was acquired days after the murder. I watched this part thinking, ‘Filming all that crap wouldn’t prove he didn’t do it. If that was the case then any criminal could just get rid of the original items and document buying all new similar ones to cover himself, and that just wouldn’t hold up. I’m not getting this at all.’

As part of the plan C.J. gets himself arrested on a bogus DUI, at which point the one likable character in the film, a black detective played by Orlando Jones, ties the circumstantial evidence of C.J.’s unique Italian jogging shoes to the murder of a young black prostitute. C.J. goes to trial for the stabbing death of the girl and his scheme seems to be right on track when, lo and behold, DNA blood evidence is “found” at the last moment in the seams of his jogging pants, the same pants bought by C.J. after the murder was already committed.

But, the evil DA and his equally evil henchman soon figure out what C.J. is up to. They conspire to prevent C.J.’s buddy from delivering the proof of the planted evidence by stealing the video disk copies that he had filmed with C.J. before they can be brought to the courthouse. The henchman chases the panicked cameraman into a horrible collision with a bus and finishes off the unconscious would-be-Pulitzer-award-winner with the flick of a cigarette into the spilt gas of the crash.

Subsequently, C.J. is sentenced to death. Now he’s in big trouble. His self framing job was too perfect, too convincing. With the slick talking DA making light of C.J.’s claims, just as I had foreseen, the jury was not convinced that he had set himself up simply to bring down the well respected DA.

But, the love struck Ella still believes in her man, thinking that anyone who could have made that poignant documentary about the ill-fated young Buffalo prostitute could not possibly be a murderer. She starts to dig into some of her boss’ previous verdicts and finds decisive proof of tampering. Ella has done it, but not without the critical help of Orlando Jones’ character, who saves her life while shooting dead the DA’s murderous henchman. In a dramatic reversal, the Michael Douglas DA character goes to prison while her beloved C.J. is released. All seems well.

I really thought the movie was over at this point, but it wasn’t.

Of course Ella is there with C.J. on his first night home after his release when she makes a cruel discovery while he is sleeping. Looking at the crime photos of the dead Shreveport prostitute in her possession she realizes it’s the same girl in C.J.’s Buffalo documentary. But according to C.J. THAT girl is supposed to have died of an overdose in midwinter Buffalo. Stunned, Ella puts it all together and realizes that C.J. really had murdered the girl all along. By doing so, he had killed two birds with one stone: he’s ended the threat of being discovered for the fraudulent documentary, while becoming famous for exposing a corrupt DA; and he ALMOST got away with it.

It’s actually a pretty good movie all told. Not quite as good as a TV episode of House or a two-hour CSI special, but pretty good nonetheless. But here is what absolutely ruined it for me and thus turned me against recommending this film: at the very end of it, Ella, played by Katie-Holmes-lookalike Amber Tamblyn, has called the cops on her now erstwhile lover C.J., played by Jesse Metcalfe. C.J., with great alarm, demands to know, “Ella what have you done?”

In a calm voice she answers, “It’s done.” She opens the door as a half dozen squad cars pull up in front of the house. Just before leaving she gives C.J. one last disgusted look, and gathering herself, she utters the words that can NEVER be said on ANY of the CSI shows, “F@CK you!”

THAT last line busted the whole movie for me. I HATE that word—hate it, hate it, hate it! I cannot remember once in the whole course of the movie where anyone used that type of mindless profanity, and it IS mindless. Those who use it so often now justify it with, “Well, that’s how we talk now. Get over it.” My answer is, “No. We didn’t used to talk that way. YOU talk that way because it has been accepted by a vulgarized society. It’s a stupid bad habit. It’s crude. It’s ugly. It’s unnecessary. The acceptance of that type of profanity in our everyday language has ruined us, made us less than what we used to be. When I was a kid growing up I NEVER heard it said by other children, or in the movies, or even much by responsible adults. As a personal reaction to it, I try not to put up with it. If I read a blog where everyone feels comfortable using the F word, I stop reading it. If someone posts it on Facebook I click them to “hide.”

I imagine the simpleton filmmakers had a meeting about that last line in their movie. It probably went like this: “Well, the movie is good, but what can we do to make it DIFFERENT from the better TV shows just like it? I KNOW! We can have her say F@ck you. Let’s see ‘em try THAT on network TV!”

I left the theater disgusted and deeply disappointed. Up until that last line I had been thinking, ‘See, they really CAN make a thoughtfully interesting movie without vulgar language…’ Then they threw it all away for that one foul-mouthed final line. Did they think the viewers would jump up and applaud? Well, that’s not likely going to happen since the Ella character never does become all that sympathetic.

It’s ironic; because I was even MORE disgusted as I first took my seat in that Robinson Theater. A filthy mouthed American “urban” gangster rap “song” (if you want to actually call it a song) was playing so loud that even with my earplugs I could still hear the profane lyrics that included a host of disgusting language like, “F@cking Ho, Ni@@er, Sh@t, Mother F@cker, etc.” And in the style of the genre they don’t say these words once, but again and again and again. I kept my temper and my seat until a second song with even fouler words started up even louder, at which point I marched out into the lobby and demanded an end to it. Why can’t they play regular pop tunes or elevator music in the theaters and malls over here? Drives me nuts!

As far as watching this movie in a theater; don’t bother. Wait for it to come out on cable.
Posted by PhilippinesPhil at 3:48 AM