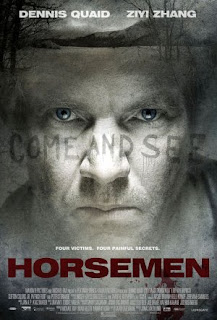 I saw Dennis Quaid yesterday in Horsemen. I expected to see at least an adequate movie since he usually picks fairly good ones to be in. Unfortunately, he chose to be in a real dog as far as The Horsemen goes. I like Dennis Quaid, but I didn’t like him in this movie.

Horsemen refers to The Four Horsemen of the Apocalypse, a New Testament book by the Apostle John, apparently written after he got old and crazy. Try reading it and see what I mean. Compared to the rest of the New Testament books this last one by John comes across as the nutty ranting of a holy man on acid. Sorry if that’s sacrilege, but I’ve always thought that, ever since I was a little boy Catholic.

Anyway, this movie starts out like a CSI episode, but quickly loses any of that kind of positive momentum. Quaid, playing a cop named Breslin, is called out to a gruesome crime scene in what I believe is midwinter rural Minnesota. He’s supposed to be a crime detective (probably in Minneapolis) with a specialty in forensic odontology; so, that would make kind of make him a crime fighting tooth specialist I guess. Odontology is usually what convicts “biters” by their distinctive bite mark pattern, but there is no biting in this movie, other than a very short reference to a biting rapist by Quaid’s short-tempered boss much later in the movie.

I disliked Quaid’s character almost immediately. Breslin shows up at the icy crime scene and is met by a local county policeman who offers his hand with great deference to the detective. But rather than shake hands Breslin instead sneers with obvious annoyance and impatiently begins to ask questions of the awestruck uniformed cop. At that point I leaned over to Divine and whispered, “What a dick!” I wanted nothing but bad things to happen to him from that point forward. Having experienced that kind of arrogance I hated him and wanted him to fail. If that’s what the director had in mind, mission accomplished.

The reason Breslin was called out was because of the improbable presence of a fancy covered silver serving platter on a table in the middle of small frozen-over creek. Man, it looked cold, brought back bad memories of frigid Michigan winters. Under the platter cover was what used to be a mouthful of adult teeth. These were nauseatingly bloody.

Immediately I thought, ‘Hey wait, why isn’t all the blood congealed and frozen; and why is there so much blood in the first place? There shouldn’t be that much blood on a bunch of pulled teeth no matter how they were extracted, unless they were bludgeoned out of someone’s mouth so that there is still gum and nerve tissue still attached.’

So, right off the bat I began to think that I was now watching a bullshit movie. Turns out it was worse than I thought.

This film isn’t good enough to provide a full description of all the major scenes so I’ll just touch on a couple of the really BS ones that totally caused me to shake my head disapprovingly, something I did a LOT in this movie. Here’s one: Breslin shows up at a real murder scene this time. A woman in a prone position has been hung by her skin from hooks and painfully bled to death. It’s a revolting scene and gratuitously so. I suppose we can thank the CSI shows for that. But the part that caused me to shake my head (yet again) was the appearance of the woman’s three grief stricken “children.” Two of the girls were little Caucasian kids with the third being an Asian “teen.”

Then I got a closer look at the Asian “teenage girl” and realized that she was obviously in her mid to even late 20s. ‘What’s up with that? ‘Divine! Look how old that chick is? They’re trying to make her out to be like a young teenage girl. It’s too obvious she’s not. She’s probably about your age!’ My fiancé just giggled agreeing with me.

The core plotline is that Breslin is struggling to deal with taking care of his two boys after the recent death of his wife. The oldest boy is quietly intelligent and longsuffering, always waiting for his detective father to give him and his little brother as much time and effort as he does to his murder cases. And now, Breslin also has to deal with this really horrible serial killing spree by a group of ritual killers.

There are maybe three plot twists in this flick. I got way ahead of one of the first ones when the oldest boy’s homeroom teacher tells Breslin at a parent-teacher conference that his son does extraordinarily well WHEN he bothers to show up to class. Instantly I thought, ‘Hey, so where is this kid at when he’s NOT in school? Uh oh. He’s the ONE, its Breslin’s own son!’ I told that straight off to Divine and indeed, THAT turned out to be THE major plot twist of the entire film. Buddabing!

The “too old” Asian “girl” turned out to be Breslin’s son’s evil accomplice. She had been molested by her adopted father and she was just getting back at him by killing HIS wife (her supposedly beloved adoptive mother), who, as it turns out, had done nothing wrong and knew nothing at all about the molestation. By the way, the ancient Asian chick was also one of the self-styled four horsemen, with Breslin’s son being the ringleader of the four.

A third horseman had to be sacrificed by the other three, but that part wasn’t given a whole lot of movie time. The fourth horseman was a homosexual high school boy with a real butthead of an older brother who had evidently spent years belittling and demeaning his little brother for his “embarrassing” choice of “lifestyle.” Ugh. This angst-ridden apparently over-sensitive gay young man kills himself in a particularly ghastly fashion in front of his jerk of an older-brother. I blanch thinking about how he did it.

So, by now the writers have apparently established that all three of these “young” people have reason to despise society and to viscerally hate members of their own families to the point that they seek to punish these family members. And THAT is exactly what they do in as sickening a manner as they could possibly come up with.

But, in the movie we learn that these tormented young people are only the tip of this vile ice berg. They (the Asian girl and Breslin’s son) claim that there are in fact thousands of disaffected people in our “f@#ked up society” (as Breslin’s son describes it), spewing out his invective to his now remorseful father at the end of the movie as he takes his own life in that weird hanging-by-fishhooks-and-wires fashion that these sick “horsemen” prefer.

In this role Quaid looks every one of his 55 years plus a few more. I don’t know if they were going for the old and tired look, but they certainly achieved it. He looks as bad as he possibly could. He would only look worse if he had gained weight for the part. He smokes in the movie, so maybe his character doesn’t get fat because of the appetite suppressant effects of the cigarettes. He’s only three years older than me and it got me to thinking.... So much so that when I came home from the movie I looked close in the mirror for the first time in months to see if I was looking “that bad.” Maybe I am? Nawww! No way.

But the real “moral of the story” behind Horsemen is apparently this: Our culture sucks. Our society is filled with people who are homophobic, with lots of really selfish people, with the adulterous and the murderous; and finally, those of us who do not abuse children, disregard them. And so, the moral goes on to warn us: do NOT be surprised then, if young people react against this evil they see all around them and become evil themselves.

What a crock!
Posted by PhilippinesPhil at 2:33 AM