Pothos, I Hardly Knew You 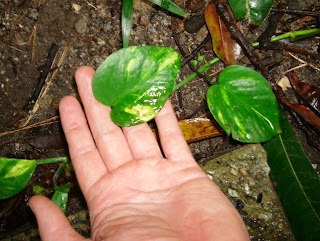 Last year when I had landscaped the area under my newly built tower and equally towering fruit trees to the point that it was ready for planting, I sent Divine out to do some shopping at the local nurseries. Of the 20 or so types of plants she came back with, four were types of vines. I liked her choices thinking that the different colored runners would look great crawling through the recently placed stones of my rock garden. I was right; among the stones, the natural mix of plants is living art.

It turns out that three of these ivy-like plants that Divine bought are different kinds of Pothos. I’ve seen these viney plants all over the world, used as house and office plants, but never worried about what they are called. I am ashamed to admit it, and me a self-styled lover of all things in nature. Why had I never heard its name before?

Even though I wasn’t familiar with what they are called, it was fairly easy to find and identify it on the net. I typed “tropical houseplants” into the search engine and there it was on the first page of possibles.

What a strange name; it definitely doesn’t roll naturally off the tongue, at least not off mine. I keep tending to call it Porthos; which would be pretty cool, naming a plant after one of The Three Musketeers. I guess I could break it down into Pot-hos, which said out loud phonetically sounds like the plural of a trampy pot. Weird how my mind works.

I planted all the vines Divine brought home in the shadiest part of the new garden, figuring they wouldn’t do well in direct sunlight. I’m sure the fact that they don’t prefer full sun is why you see these plants all over the world in 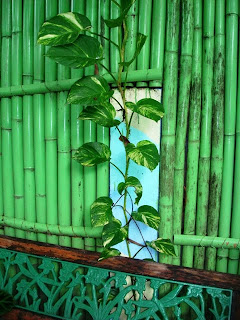 every mall you’ve ever visited and on display in so many doctors’ offices.

The vines flourished in their new home among the shady rocks beneath my thickly leafed mango trees. In no time my many Pothos plants began to sprawl out of the confines of the small rock garden. One particular vine pushed its way beneath the bench against the wall upon which the bench rested, although I didn’t really pay much attention to the wayward tendril until it popped up above the bench back. It was neat how its roots attached to the painted concrete blocks and then, as the Pothos pressed ever upwards, its roots continued to attach themselves tightly to the decorative painted bamboo above the blocks.

The roots don’t seem to care what it is they find themselves up against. As the vine sprouts outward into the world, the brown worm-like roots attach themselves to whatever it is they happen to touch up on, and so tightly that it seems as if they have glued themselves onto that host surface. Once Pothos has tacked itself to something it ain’t coming off; it actually seems to become chemically part of the surface to which it is attached.

I can’t believe I’m devoting an entire post to this plant, but the more I watch it in my garden the more fascinating I find it to be. It’s next amazing feature after its efficient roots are its prolific leaves. They aren’t all that amazing as they grow in a potted plot in your grandma’s living room, but the leaves of the Pothos plants become truly extraordinary once it begins to grow upwards on a tree or up a wall, for once the plant starts to climb, each successive leaf grows larger than the one beneath it. 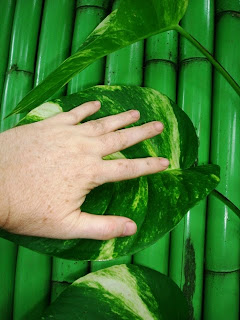 The Pothos growing up the wall behind the garden bench is now about 8 feet up, and incredibly, its top leaves are almost a foot wide. When I first noticed the size of the uppermost leaves on that plant I thought I was witnessing some kind of natural miracle. I had never seen any similar plant with such elephantine leaves. Why were they doing that? I had to find out why they were growing so large and how much larger could they possibly get? And so, I looked up this otherwise ordinary plant on the internet to learn that it is called Pothos and to find out its secrets.

Researching the plant I was amazed to learn that in the tropics it can grow upwards into trees to the height of 65 feet. Even more amazing is that the leaves on a mature climbing Pothos can actually grow three feet across! None of that would have seemed even remotely possible until I had the opportunity to see my own Pothos plants now in action. None have climbed that high nor have any of the leaves reached those yard wide proportions, but at least now I know of their exciting potential.

I also have several Pothos plants growing outside in hanging planters and their vines seem quite content to grow downwards with some vines as long as 20 feet so far. The interesting thing is that none of these potted Pothos vines seem to have the least inclination to grow upwards when they come i 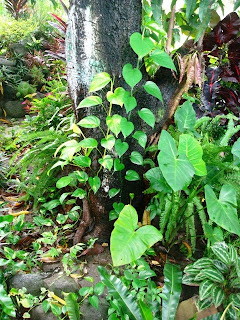 n contact with a wall. It seems that only those plants that grow rooted in the ground will send their vines upwards into trees and up walls. I really do not understand why this would be. Nature can be so quirky at times, but those miraculous eccentricities are much of the attraction for me.

Another curiosity is that the Pothos leaves stay small and ordinary as the plant travels outward along the ground. It’s only after it grows upwards that its roots begin to activate by attaching themselves deeply into the vertical surface, growing deeply and quite snuggly into that material. The same is true of the leaves; it is not until the vines begin grow upward attaching to some kind of surface, that its leaves become robust and start to reach their full potential in size and thickness. To compare, I have another different type of tree climbing vine that sends out super long reddish tendril like roots all the way down to the ground; unlike the Pothos vines though its leaves do not increase in size as they grow upwards into the tree.

I’ve already trained several Pothos plants to start growing up the massive trunk of my outdoor mango tree using u shaped staple nails to hold them in place on the tree to get them started on their journey upward. So far they are doing wonderfully and seem to love their new home growing up the side of the tree.

Seeing how beautiful those tree growing Pothos have become, Divine and I were inspired to transplant a half dozen Pothos “babies” to the base of our “indoor” mango tree by using the end cutting technique. It’s been about a month so far and the six little vines are just now beginning to send out their first new leaves. I can’t wait to see if they will thrive as well as their outdoor 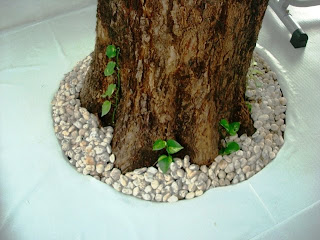 As far as I’m concerned, Pothos has become my new favorite plant. Pothos is king.
Posted by PhilippinesPhil at 4:43 AM

nice and they are really easy to care for...people without the green thumb you have can even keep these well...

I had two of them at home and one at my office. The one at my office bit the dust due to lack of water but the two at home are doing just fine... at least until I read this post and realized their true potential. Unfortunately, I can't plant mine outside or I would do so immediately.

Exactly, I took this ubiquitous plant for granted thinking I knew all about it from its potted "dangling" version; but its tropical "climbing" self is the REAL Pothos. Now, am I nerd or what?

Hi good day ! nice post you have . It's very nice , I have plan to setting up my garden can you give me an idea or steps on how to make it beautiful. i have heard some garden accessories such as garden spinner , wind chimes , wind spinners and many more . I want to try this things in my garden but i don't know how to get the right accessories . I hope you can help me . thank you .

In my country, snakes are attracted to pothos plants that are grown in outdoor gardens. So people are scared to grow climbers outside.

Great! I love snakes and all critters for that matter. So far I've only seen one snake, a house snake,and the maid killed it darn it. Pothos cleans the air, its basically an oxygen pump. As far as I'm concerned you can never have too much of it.

Wonderful blog! I really love how it is easy on my eyes as well as the facts are well written.
I am wondering how I may be notified whenever a new post has been made.
I have bookmarked you! Have a nice day!

Scarlet, I see you are out of Melbourne and are in the business of selling office plants. Someday I'd like to check that town out. I haven't written lately on plants. My current personal craze is all about scuba diving but its true that I'm also still nuts for plants as well. All things nature is my bag...