Diving along the cliff face, we happen upon a cave... 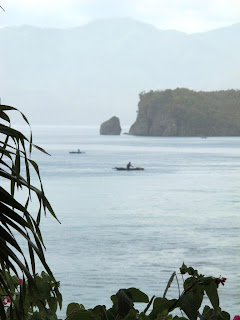 Snorkeling up and down the coast had been fantastic, awe inspiring even, and convinced me that there would be some even greater sights to see along those soaring cliffs and fallen boulders via scuba diving as well. I mentioned this to Don hoping to plant the idea to include some shallow dives along the various shore lines around us. No problem, he liked the idea right away.

When not in the water we were often up on the huge dining veranda directly above our beach side rooms. From there the eyes are naturally drawn across the water to a huge lone rock placed like a miniature isle mount perhaps 500 meters out. All told I probably took more than two dozen photos of that big rock. It practically insists on being photographed. 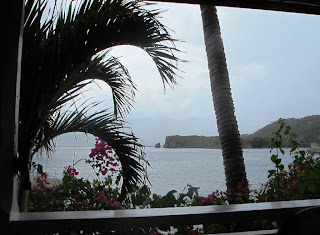 The water just off that rock also happens to be a designated dive spot, one of about ten located in the immediate vicinity of the resort. Every one or two hours another dive boat from Sabang would drop off a gaggle of divers at that particular one by the rock. We would have dived it too on our first trip except the resort’s dive boat was out of commission, or its Mercury outboard was anyway. 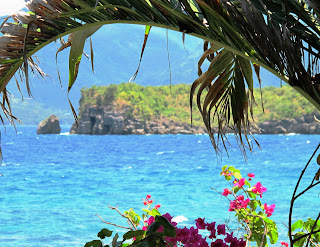 Don had taken a cursory look at it in May and declared that he would bring some tools and hardware next time to see what he could do, if that was all right with the manager that is. From what I’ve seen of Don’s mechanical abilities I had no doubt that he would have that outboard purring like a waterborne kitten when we got back.

On the very first afternoon of our return Don asked the resort’s boatman to have the dive boat brought up and tied tightly to the dock so he could work on the outboard. I could see them below from the veranda. Within minutes Don had the engi 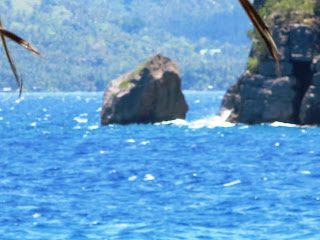 ne torn apart into at least two dozen pieces, all spread out around him. When it comes to problems involving mechanics, hydraulics, electronics, computers, cars, motorcycles, scooters, you name it, Don can figure it out and fix it.

As far as that big old Mercury, he had never worked on an outboard before, but within a few minutes he had it mostly figured out. He explained, “It’s 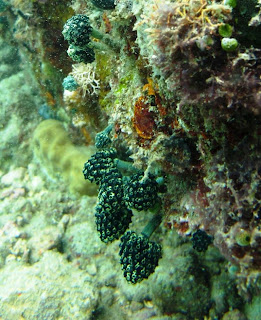 just a two stroke engine, like a lawnmower on steroids with three ganged cylinders…” He went on to explain the function of all the other devices and mechanisms that he had sorted out as he removed, refurbished and reinstalled them. In two hours he had it started and running; after another hour he had it spinning like a top. It turns out there was no one major problem, but a host of small ones. His innate mechanical abilities notwithstanding, watching him methodically repair that outboard reminded me why he’d been so successful as an aircraft maint 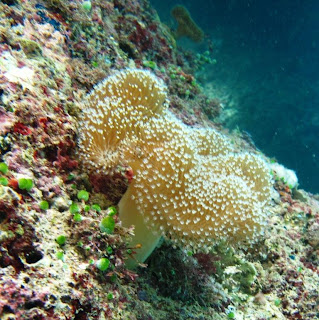 enance superintendent in the air force. He epitomizes old school American ingenuity; he’s no nonsense and doesn’t quit until he arrives at a solution.

By the time we headed out to the rock it was well into the afternoon but I was happy to see we still had plenty of sunlight for good underwater observation. Wait too long into the day and visibility drops dramatically. 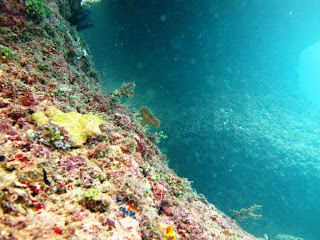 ere the water meets the rock face; the insistent current persistently tugged the boat away from the spot we wanted. Finally we were all geared up and perched for our back flip into the drink. Don gave me thumbs up and flipped over. A second later I pushed back; saw my flippers framing the sky, then water, then boat, then sky again. I love that dizzy head over heels feeling—what a rush! 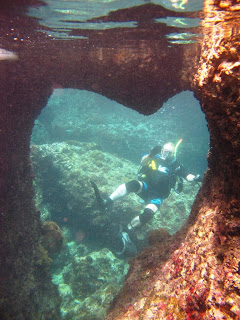 I gave our girlfriends and the boatman thumbs up and as per our agreed upon plan I swam to the cliff face, fighting the current every inch of the way. A little out of breath when I got there and the water being so deep along the smooth cliff, there wasn’t much of a rest to be had—there wasn’t much to cling to and the water was surprisingly deep at that spot.

I didn’t see Don until he suddenly popped up to my right. He must have been a feet below for me not to see him during the 20 foot swim. Div 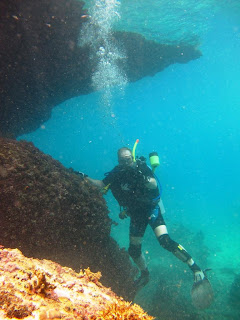 ing is like that, it can be very difficult to see what’s around. I always feel like I’m wearing blinders because of the mask; and its made worse that the head is restricted from easily being able to pivot from the regulator held in the mouth. You can turn or crane your head somewhat, but mostly you have to maneuver your entire body in the water to change the field of view.

Peering down I felt a thrill trying to see how deep the bottom was at that point near the base of the lone rock. The water is a dark bluish green and the underwater cliff face drops away without end. We definitely would not be diving in that direction on that day. (A few days after I had already left for home, Don dove that spot on his own. He said 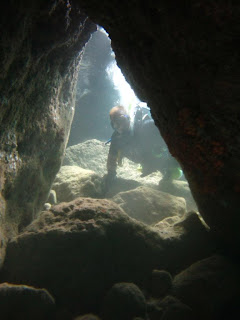 he had the boat drop him well away from the cliff face and then headed straight down. He found the bottom at 125 feet. There wasn’t much to see other than very silty brownish sand. He made his way slowly back up the cliff face and found it to be a series of terraces all the way to the top.)

We decided to drop down ten or twelve feet and make a lap around the big old rock. It wasn’t an easy swim due to the relentless current sweeping around the point protruding out into the channel at that spot. Struggling, I didn’t much enjoy it. Like all rocks and boulders protruding from the sea there the bottom structure is much eroded so that the shape as seen from below looks like an enormous rock mushroom head on a stony stalk.

For me, the fun of that dive star 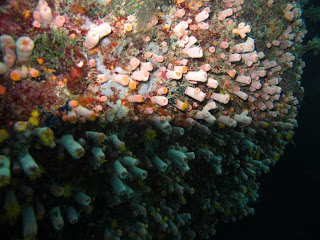 ted when we began exploring the shore line, keeping mostly 20 or 30 feet out at mostly shallow depths from a few feet down to no more than 15 feet. I saw types of corals, polyps, sea squirts and other colorful oddly shaped sea life that I had never seen elsewhere in our other dives before. Even now, several weeks later, I’m still trying to identify some of what I captured on my Canon G11. 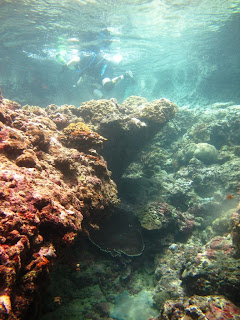 Aside from the amazingly diverse life all around us, the toppled boulders and rock slabs all jumbled together half in half out of the slapping waves high above us was wondrous in itself. We explored what amounted to underwater rooms, their ceilings and walls consisting of the expansive sides of topsy-turvy hunks and chunks of giant stones. We’d swim up narrow passages of rock and find ourselves under and behind giant boulders, the boulder-blocked sun very often providing very little light to see by. Don would have to switch on his spotlight so we could see what was about.

Now that I’ve learned how to do it, I’ve embedded two videos taken by me, one below showing Don swimming into a cave that we’d found during the very moments I shot the clip. Thus, you are watching a moment of discovery. He had no idea how deep the cave or what awaited him once he got into it. In other words, it was awesome! Once determining it was safe and sound, Don, who is certified to dive caves, signaled to follow him in by flashing the searchlight. 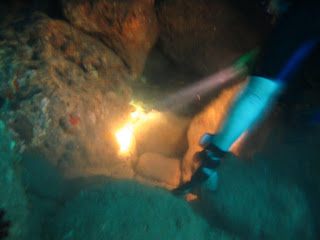 the water’s surface filled with what turned out to be dubious air. I opted not to go off regulator worrying that there might be a pocket of something toxic lurking in such a small space. All it takes to knock a body unconscious is a breath or two of methane from a rotting animal carcass. Don said he tried a short gulp of it but quickly went back on regulator when he tasted the staleness of that tiny space completely isolated from the outside atmosphere.

The other video above sh 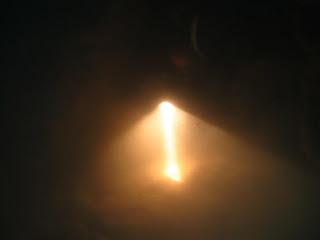 ows one scene of what I describe above, the boulders and fallen slabs of rock forming underwater open spaces of assorted sizes and shapes. Notice the impressive colony of pinkish orange ascidians firmly attached to the underside of the enormous rock forming the ceiling of that particular cavernous space. Some of the ascidian colonies (also called sea squirts) resemble bee hives. Notice also the school of hundreds of yellow fish busily swimming about in their “rooms” beneath those stacks of fallen rocks.

At the end Don swims through a very narrow and low opening to the other side of the house-sized boulder; with camera rolling I follow. He turns and carefully watches to make sure I keep low to prevent from catching my tank as I come through. You can see him signaling to stay low.

We come upon a giant sea turtle and I video it as proof of our encounter it in my next post…
Posted by PhilippinesPhil at 4:22 AM