Mark Dizon's Murder Spree has definitely come to an end 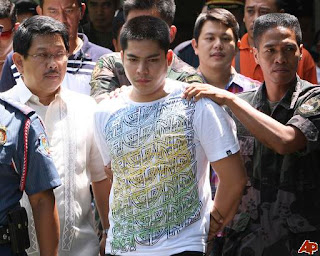 By now, everyone following news of the Mark Dizon murder spree knows that he was captured with a slight struggle in the town square of San Fernando in the province of La Union. By bus, that’s about four hours north of here, Angeles City, where all the killing took place. Dizon’s father was afraid that his son would end up going down in a hail of gunfire and according to one account that is probably exactly what would have happened.

As previously arranged, the youthful looking killer came out into the San Fernando town square to meet his dad. Some news accounts state that Mark tried to pull a handgun once he realized that the meeting was a trick. Thankfully the police team was able to bring him under control before he could use it.

I did a search engine check using “Mark Dizon capture” and was amazed to see how worldwide the interest in this case has become. News groups from Australia, to Hong Kong, To England, to the US, to everywhere in between are reporting on the killings and on the capture of the killer. Its interesting to see how so many headlines are trumpeting how the Angeles City police were able to use Dizon’s Facebook account to identify him and his connections with the daughter of one of the men killed. It's as if Facebook singlehandedly brought a killer to justice. Sensational stuff.

I’ve got to give the AC cops some real credit for how they developed and followed their leads right to the killer. For the most part we who live here tend to think and say negative things about law enforcement. So far though, the way this case has progressed, its gone a long way in beginning to reverse some of that negativity.

In fact, I was so pleased with the outcome of the manhunt that I sent a congratulatory message to the mayor by way of his Facebook. I thought that was apropo considering Facebook is how they were able to crack the case wide open. Either the mayor or one of his staff even sent a response blurb:

Fil Spare July 28 at 12:03pm
Amazing job on the apprehension of Mark Dizon. Not just the foreign community, but everyone living here breathes a collective sigh of relief. Thanks Mayor!

Ed Pamintuan July 28 at 12:47pm Report
Mark dizon has been charged before the court with 5 counts of murder and robbery in angeles city. a separate case of illegal possession of firearms will soon be filed in san fernando city, la union. we did this because of the collective efforts of the city administration, the local police units and the local community, both locals and expats. with this kind of cooperation, angeles city will soon become a haven for foreigners, tourists, residents, retirees or visitors alike. thank you. let's continue to be vigilant.

I was shocked to see all the views of my blog post displaying the photos of the perpetrator. I don’t check my sitemeter all that often, but I decided to see if anyone was paying any attention to this particular post, and boy oh boy, are they ever!

I went to the sitemeter page showing the referral sites, and it’s obvious where all the traffic is coming from. The “PhilippinesPhil Mark Dizon photo spread” has been linked in the CNN world news site, The Huffington Post as well as in several popular blogs and other news sites from around the globe. With the way search engines work, which is to rack and stack by numbers of hits, after a site begins to build up a head of steam the hits become more and more. In other words, the more hits you get, the more hits you get.

To get an idea of this take a look at this graph from sitemeter showing page views for the month of July up until today, July 28, 2010: 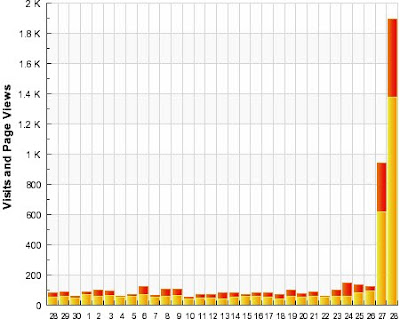 As you can see, normally, I have a very small viewership, which is fine by me; I’m satisfied with the few readers that happen to come across my almost 400 posts. Over the last two days though, since posting Mark Dizon’s photos, which were sent to me by an anonymous source, the PhilippinesPhil site has received an unheard of number of viewer hits.

It will be nice if some of you who happened by my site this way continue to come back and read a few of my other posts, future and past. I think I have a unique way of describing what it is like to live here as a foreigner. Come on back and see.
Posted by PhilippinesPhil at 12:13 AM

Wow, that is one heck of a spike. My most famous post is the one I did on Ragbrai nudity which gets lots of hits this time every year. Still, I'm talking maybe 200 extra hits, not thousands as this post got.

Yeah, they're still rolling in, almost as fast as ever. Its crazy.

congratulations on the spike of your readers! Your blog was posted on one of my friends wall in Facebook so I took time and read it...

btw, my question on your blog post "unexpected death" was already answered here.. that was the blog post shared by my friend so I started reading there.. I got you on RSS feed and shared your blog post on my wall.. I used to write my own blog but I was tied to so many things that I haven't got the time to write... Oops! sorry off the topic..

Anyway, thank God that the authorities are on their feet.. I past by the funeral home where the bodies of the late Mitchel's lay and I think their burial is today and they can rest in peace...

Yes, Al was buried today. I got up and got dressed to go and had to stand down from attending due to some bad pain in my back.

No need to congratulate me on the thousands of viewing hits; I merely pointed it out to highlight the huge worldwide interest in the murders. At this time my viewership is almost back down to "normal." Thanks for stopping in.

i'd been reading your previous posts regarding this killing spree. i'm glad he is caught. i wonder if he acted alone.

it is good to read your perspective of the philippines. you are honest. i am glad for that.

Thanks Malor. I try to be honest without going so far as to make life dangerous. Its a close thing. As for Mark Dizon, based on his well off background and the way he carried out his crimes, it looks to me like he acted solo, definitely a good thing. I just hope no one copy cats him.

As usual Phil you have outdone yourself. IMPO it is about time you get the recognition you deserve. I am pleased that the alleged perpetrator has been captured and hopefully no further violence against residents of Angeles City occurs whether they be foreigner or local. Job well done!

LOL! David... Recognition? Not sure why, but thanks buddy!

What motivated him (Mark DIzon) to commit deviant behavior or criminal act?

Good question. I spoke to someone today whose friend went to college with Mark Dizon. He describes Dizon as being a loner at times and someone who got in fights. Neither of those characteristics is very typical of any Filipino I know. Sounds like he might have some personality disorders, including being a sociopath, as well as some bipolar problems. Thing is, his murders and other crimes were planned in detail and well carried out showing a high level of reason. He was rational when he did these things; he KNEW what he was doing was wrong. He should stay incarcerated for the rest of his life. Back home, he would likely find himself on death row.

What motivated him (Mark DIzon) to commit deviant behavior or criminal act?

I believe that there is so much interest in this matter because this idiot killed a number of people who had many, many close friends. Geoffrey Bennun was my step brother. He has thousands of friends all over the world. He was a good, decent, hard working man who did not deserve to die like this

Amen Anon. The world will be watching carefully how justice plays out in this case, if it does. The wheels can turn ever so slowly here to the point that getting the right thing done can fall between the cracks. The back room deals are already in motion, you can bet your butt on that. I really hope I'm proven wrong. So far, I have been. May it continue.Mark Dizon should NEVER see the outside of a prison cell, EVER.