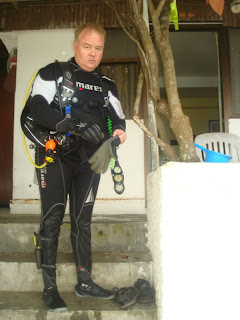 In all my visits to the waters of Mindoro going back to April 2003 I have never seen them siltier with such poor visibility. The reason for the extreme murkiness was clear enough—windy stormy weather, continuously churning the water like a shaken glass snow globe with the same results, lots of floating particulate.

I realized exactly how poor the water clarity was the first time we reached the underwater mooring point of the buoy located immediately out from the end of the breakwater pier in front of the hotel. Taking a seat on the huge cylindrical concrete slab I peered directly up the chain and rope. Last June the water had been clear enough to easily see the buoy from its mooring point below and vice versa. But this time, when I peered intently up toward where the chain and rope soared vertically above me, instead of seeing the buoy at the end of it on the water’s surface some 30 plus feet up, all I could see was the chain disappearing completely into green cloudy nothingness in less than 15 feet.

It was during this first visit under the unseen buoy that it was ripped free of its connection to the chain at the exact moment that I happened to be directly under it. What a coincidence, eh?

After the falling chain incident it wasn’t long after our return to shore, probably about the time that a hotel employee retrieved the detached buoy for our perusal, that Don got a wild hair and decided that, by golly, WE would reattach it. He declared this with complete confidence; while I on the other hand, was not nearly so sure.

He spent the next hour repairing the broken steel attachment ring, using heavy GI wire to make a series of tight wire ties to attach a 2 inch stainless steel screw across the broken ring, in effect replacing and reinforcing the metal corroded away by sea and salt. As he worked he described how we would take the big buoy, looking like a weathered oversized beach ball, back out to the spot and reattach it. Turning to study the choppy water I made my reservations known. I worried that the motion of the ocean would make it 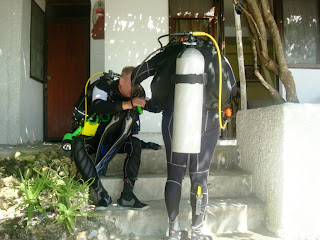 next to impossible to use tools without fumbling and dropping them. Positive and self-assured as always, Don was absolutely confident that it was not only doable but would be relatively easy, to the point that we would have time to do a little exploration diving after we finished our task. I sighed and hoped he was right.

When everything was prepared for “the mission” we suited up. Don added a catch bag to the front of his buoyancy compensator vest to carry the tools he’d need to do the job. He attached a 40 foot length of nylon string to the buoy ring and rolled most of it around a small plastic water bottle filled with water so that it would be neutrally buoyant.

We headed out into the waves where soon everything went to crap. The chest deep water at the end of the pier pushed and pulled us all about; huge rocks all around us on the bottom caught at our flippers continually causing us to fight for footing. During this mayhem I dropped the shaker tube (used to get his attention underwater) he had given me as we struggled to get control of the buoy. At that point a section of the nylon line became snarled. He had intended to slowly pay it out as we swam. I found and retrieved the shaker while Don worked at untangling the line. Once he had that done we deflated and headed to the relative peace and stability of the seafloor, the buoy now in tow, the end of the line firmly grasped in Don’s gloved hand. 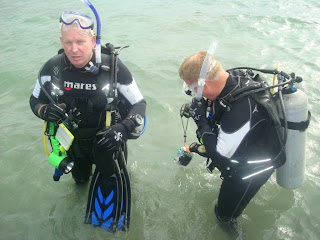 e seafloor. Don was basically crawling along the bottom barely skimming above the rocks and coral some ten feet behind me. Suddenly, my senses exploded with alarm when a yellow and white banded sea snake more than a yard long popped into view only a few feet beneath me to the right. I could have kicked out with one flipper and touched it.

Almost all sea snakes are poisonous but my understanding is that they are mostly nonaggressive. They have a small head so a person would have to practically stick a finger in their mouth to be bitten by one. Thing is, from my vantage above the two of them I saw that Don was blithely swimming directly toward the bright yellow water serpent which was hidden from his view by a small coral formation. Basically, the two were heading directly at each other.

Frantically I waved at Don with one hand to get his attention while trying to make the other hand resemble a swimming snake. I continued to do this with as much urgency as I could possibly muster trying to get him to understand the danger ahead. To my relief he finally gave me thumbs up and slightly veered away from the hidden danger.

In only a few minutes we found the gigantic tuna can-shaped concrete buoy anchor right where we expected it, but something did not seem right. Where was the chain? And why did the rope seem different from when we last saw it during the previous dive? We shrugged it off figuring that one of the dive parties regularly visiting the dive site had absconded with the chain; as far as the mystery of the rope, we blew that off.

So, instead of reattaching the buoy to the now nonexistent chain, Don changed the plan; he would now reinstall the buoy in place using only the rope. It wasn’t ideal since an unweighted rope would allow the buoy to be pulled around by wind and wave, but oh well. We headed topside to 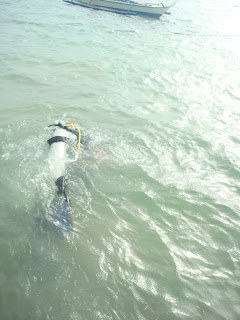 get started. On the way up I grabbed the end of the rope where it hovered a few feet beneath the surface. We popped up and went on snorkel to save our air, the swells worse than ever.

The next hour gradually became absolute hell for me. Don spent more than half his working time submerged and the rest on the buoy itself with me at the surface. I spent the entire hour plus holding onto the buoy attempting to keep it in place and steady enough for Don to permanently reattach it. No matter how I held it however, the darned thing kept bobbing and spinning. Every so often a large wave would lift it high before crashing it down into my head or body. After a half hour of that bruising situation I began to feel something else that caught me completely by surprise—seasickness.

The next time Don rejoined me at the surface I toyed with the idea of telling him that I was sick, but ruled against it. I figured he had to be almost done and I knew from past experience that talking about being sick would only make me sicker. I continued to gut it out.

My partner re-submerged and I found myself on the wrong side of the buoy; by wrong side I mean that it began to beat me in the head with every wave. At this point I began to retch. I was at the end of my rope in more ways than one. Don came up one more time and I told him I was about done. He asked me to hold on for a little while longer; he needed me to hold the buoy steady while he made the finishing lashes. I held on, feeling greener than the angry water in which I bobbed.

At last, Don finished. I finally informed him that I was so sick that if I didn’t start swimming back immediately that I wasn’t sure if I would make it back at all. He looked at me strangely not saying much. I think he was surprised. I turned for shore now looking miles away, put my head down and be 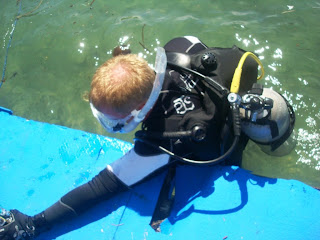 gan to move my arms and legs in a weak semblance of a swimming motion.

I have never swum nauseous before and I hope never to again. The relatively short distance probably took me almost fifteen minutes to cover, but it felt like an hour. I’d put my head down, weakly kick my fins and breast stroke with my arms. After a minute or two, I’d look up to check on my progress; each time I’d find that I was no longer even swimming in the right direction. I would readjust and press on.

Eventually I made it back to the still water behind the protection of the breakwater. I had little strength left but managed to drag my body to a standing position by desperately holding onto the floating dock. Divine came out to greet me with her normal smiling “hello;” but I could only shake my head and lay it on my arms on the dock. Worriedly she hovered nearby waiting for me to gather myself. 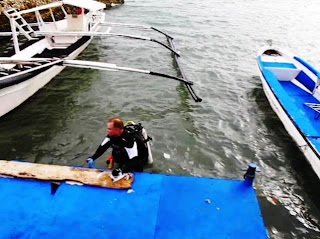 ive. Diving always makes me feel better. What I had done the day before had NOT been diving, it was more like bobbing while retching. Ugh.
Posted by PhilippinesPhil at 4:10 AM