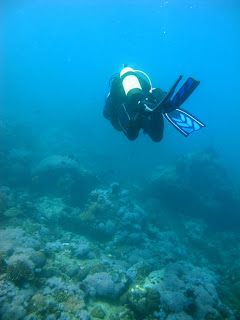 So here’s the revelatory information revealed to me during that dive I was in the midst of describing in my last post, part 5: I CAN go deep!

Up until that dive I thought that I would never be able to get very far below the waves due to my inability to get deep quickly, all because of my inner ear equalization problems. But on this particular dive I learned that all I really need do is to get my ears equalized at 35 feet, and once good to go at that depth I’m good to go at ANY depth.

Here’s the drill. While still on the surf 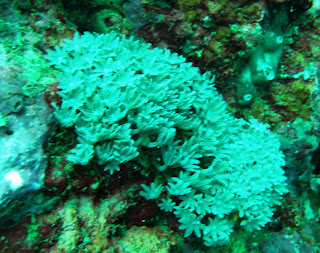 ace I pinch my nose and blow steadily until my ears pop, not too hard of course. I deflate my vest one squeeze at a time until I slowly begin to sink. All the while I continue to keep positive pressure in my middle ear by pinching m 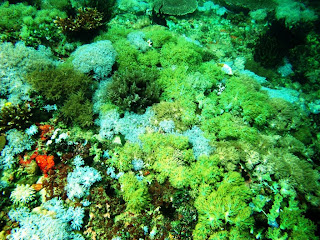 y nose and blowing, while also swallowing and moving my jaw. Even with all these actions I begin to feel painful pressure right around ten feet down. As soon as I feel the beginnings of that pain I stop descending and go back up a foot or so and then swallow, swallow, SWALLOW. 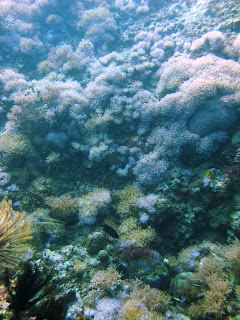 Within a few seconds, sometimes up to a minute, I’ll either feel the end of the inner ear pressure suddenly when the telltale pop goes off in my head signifying equalization, or the pain just withers away, like air slowly escaping from a balloon; the latter not quite as satisfying as the instantly occurring “pop,” but good enough nevertheless. Either way, I release more air and sink down a few more feet until the pressure begins to rebuild; and 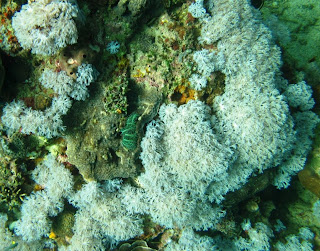 so the procedure continues.

Until this dive I thought I would have to go through this grinding routine all the way down to whatever depth I ended up at, which sucks since it eats up air pressure, and just as bad, it drasticall 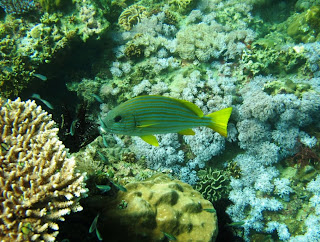 y reduces bottom time since the body’s tissues begin to absorb nitrogen almost as soon as the dive starts. Most people know that “the bends” is caused when the nitrogen comes out of solution faster than the body can safely process it out of the blood stream. This “out gassing” should occur between 30 and 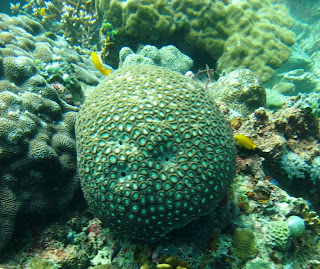 20 feet on the way back up from a long deep dive; how long it must be done depends on how deep and for how long the dive.

So, based on all that bit of simplified physiology, if a diver intends to go deep for an extended period, ideally, the depth should be reached as quickly as possible. The faster the depth is reached, the more time one can spend down there, and the more safety can be 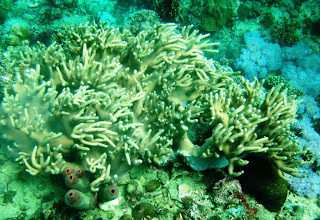 built into the ascent plan to allow for any glitches on the way up to the “safety stop” aka “the out gassing period.” 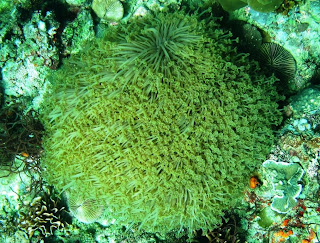 I wouldn’t have enough air left to safely and properly out gas on the way up. Indeed, my narrow Eustachian tube syndrome was all very troubling and depressing considering how it would necessarily limit my scuba career to only a bit of shallow diving. Sigh.

But NOT anymore! Now I’m one happy scuba camper. Settling on my stomach into th 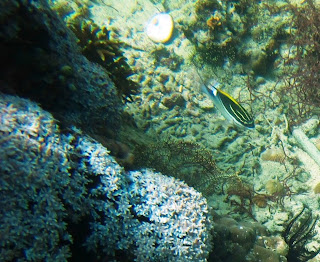 e silty sand next to the buoy mooring concrete I checked my depth gauge—just over 30 feet. Don pointed south toward the down slope, then pointed to my ears and gave me a questioning thumbs up.

‘Let’s go for it,’ I thought, and gave him a return thumbs up. O 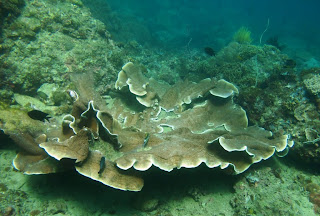 ff we glided to the edge of the precipice. Almost immediately I felt a slight pressure in my ears so I blew against my pinched nose and swallowed hard. “POP!”

Ahhhhh! Instantly I was flooded with joy and relief. I checked my gauge—almost 40 feet. Don had paused knowing that I probably would need time to equalize but as soon as he turned t 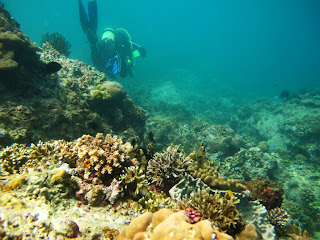 o check I gave him a thumbs up and pointed down the gentle slope we now rested upon. Pushing against a rock he slid down another ten feet or so. I followed, expecting ear pain.

But what’s this? No pain! Not even a hint of pressure behind the ear drums. I was delighted. ‘Oh man! We’re already 60 feet down!’ Don looked over 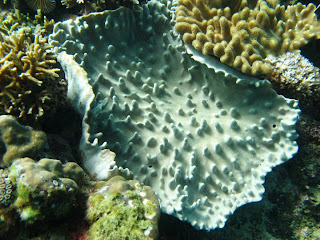 at me and I gave him a hearty thumbs up. ‘Let’s go!’ I yelled at him telepathically.

We continued like this, gliding down, down, down. My ears were no lo 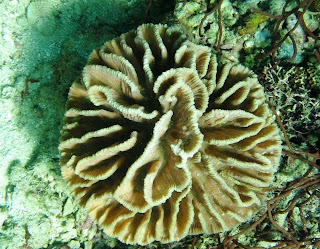 nger even a consideration. I kept my console in my left hand and watched the needle climb higher and higher. When the bright orange warning section on the pressure gauge turned to gray I knew we had passed 70 feet, where the sun’s ability to penetrate deep enough to provide the perception of certain colors, like red and 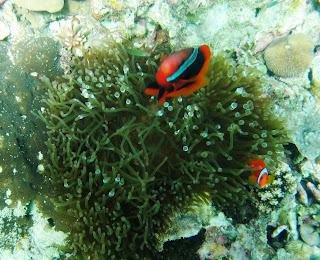 orange, ends. I KNEW it was going to happen, but I was thrilled to actually observe the phenomenon for myself. ‘This is so COOL!’

As we sank deeper we began to angle eastward so that we went down the hill on a less steep more diagonal course. In this manner we covered a fair distance both down and away from our starting point. I felt a new thrill at each newly reached depth for m 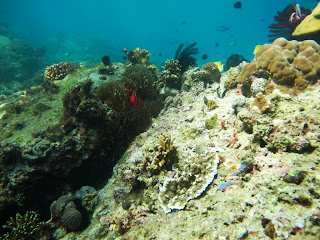 Don stopped us there. ‘Fine by me’. We were at 93 feet! Awesome! I looked off to the south where even deeper depths lurked. ‘I’ll be back’ I whispered to myself. I glanced north and then craned my head up, ‘Where did that cliff face come from? Dang, but that’s a long way up there.’

Suddenly, Don pointed up that cliff face and took off. ‘Okay, I guess we’re 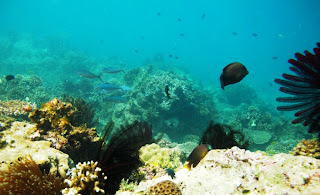 What the . . .? Don was practically sprinting upwards. ‘Something must be wrong.’ As he practically flew up the steep hill I lagged back. Soon he was 10, then 15 feet above me, kic 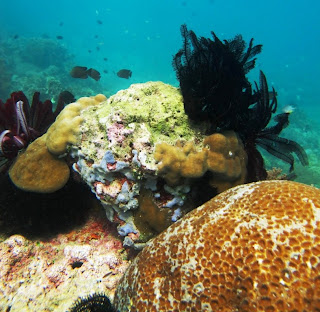 king his fins as hard as I’ve ever seen him do so. ‘Holy cow, he’s like a rocket!’ I let him go, knowing I’d soon see him at the surface. We had plenty of air left so I KNEW something was up, and soon it would be us.

We hadn’t been down deep or 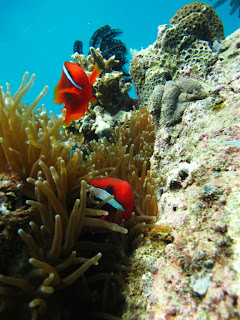 long enough to have to worry about a safety stop, so that was of no concern to me, but I took my time drifting upwards just the same, keeping my eye on Don’s flapping flippers as I followed my own bubbles to the surface. Eventually, I too reentered the atmosphere some ten feet from my dive partner. I noticed he was coughing and sputtering before I got the obvious question out, “Are you oka 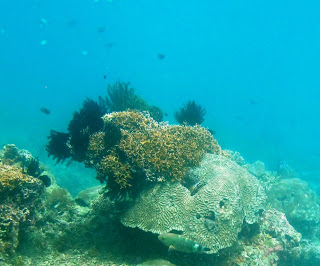 “Wait a sec. Cough. Cough. Cough. Gasp. Cough.” He put his regulator back into his mouth for a few breaths before taking it back out and endeavoring to respond. Finally, he could. Between coughing gasps he explained. 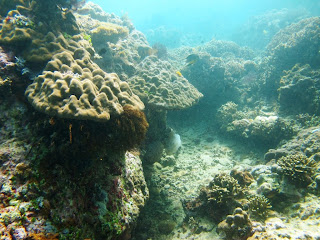 into his throat when his regulator came mostly out of his mouth. He began to cough and couldn’t stop. Rather than try to clear the coughing at depth, which should be entirely possible, he opted to head back up and do it. I asked him if that had ever happened to him before and he said no, never in all of his hundreds of dives going back to ’96. 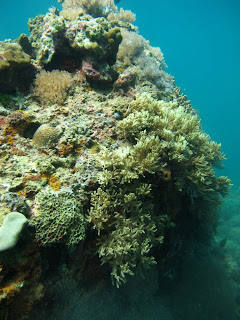 That’s diving. You just never know when “stuff” is going to happen. Just don't panic, try to think ahead for any contingency and plan for what you will do to survive it. For me, as long as I'm breathing, THAT is the main thing. Recover and live to dive another day.

As for me, a great weight had lifted from my scuba diving shoulder 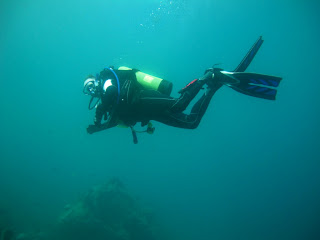 s. I KNEW that I could go deep! I had and I would again!
Posted by PhilippinesPhil at 12:43 AM

So beautiful... it's been years, but I'd love to try that again. I've been too busy of late, but wishing you a Merry Christmas and Happy New Year!

Hi Beau, just turned midnight here, so Merry Christmas in real time. I'm planning another dive trip in January. Getting married next week and planning on living in Texas, so I better get my diving in while I can, you know? Thanks for the good wishes. Same to you and yours!