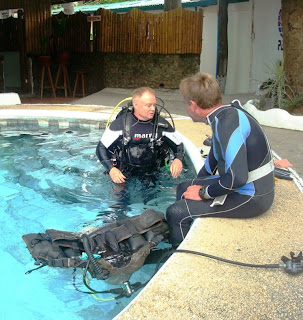 Long before I actually met him I had heard “things” about Big Apple’s dive instructor Peter. The word was that he could be impatient, didn’t suffer fools and tended on the grumpy side. Just the same, by the time I finally got the chance to meet the infamous "Big Apple Pete" I was actually looking forward to the experience.

Peter’s “meanie” reputation was not off-putting for me at all. In fact, as I said, I was looking forward to it. After all, I had, during my 27 glorious years in the military, survived and thrived under the most menacing of instructor type meanies the Marines and Air Force could throw at me. 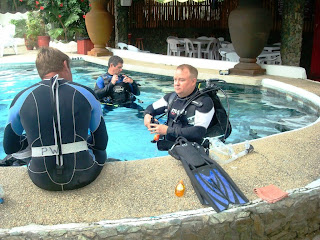 But, instead of even worrying about any of that stuff I decided I would do what I always do when in an important "school house" situation, I would defer completely to the instructor in a professional military way. It would be “yes sir” and “no sir.” I would do everything in my power to give my complete attention, to follow every order with all seriousness and enthusiasm.

When I first spoke to him though, I saw nothing of the supposed Peter meanness. He was polite and downright nice even. He wasn’t a meanie at all. No, not mean, but perhaps a little difficult to understand? From the moment I met him I found myself continuously questioning what he said. You see, he doesn't exactly speak English, he speaks "Aussie," a decidedly different way of verbal communication. Sometimes I’d ask him to repeat what he just said, or I’d repeat out loud what I THOUGHT he said and give him or one of the other students or assistant instructor the opportunity to correct me. Or I should say interpret for me. And yes, I'm only half serious; but belive me, there's a definite grain of truth to that serious half. 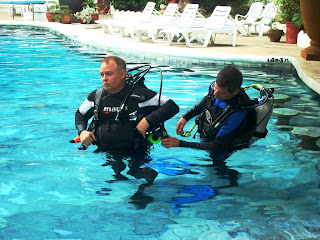 The first thing he had me do was to take the verification test. I had handed over my online completion certificate but I still needed to prove that I was the one who had actually taken the course. Truth be known, this test, which must be passed with at least a 75% correct score, had given me a case of the nerves for the day leading up to it. When Neil, the manager of Big Apple, had told me in an email only a few days before my arrival that I would have to take this test I began to worriedly review the course material. I did so right up until I went to sleep the night before we left.

I noticed immediately that the test was only 18 questions long. ‘Oh great, that means I can only miss 4 and still pass. (Gulp!)’ 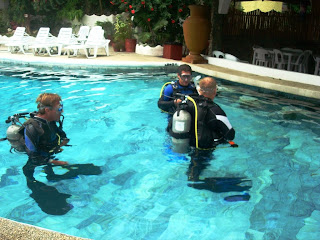 Setting right to work on the test, I successfully mowed the questions down like plastic bowling pins. I found them extremely easy UNTIL the final three, which were on dive planning math. Dive planning is all about how deep the dive, and how long at that depth the diver can stay without requiring decompression time before surfacing. PADI has come up with a Recreational Dive Planner (RDP), which is a chart consisting of three associated tables, and I must say it’s pretty ingenious. It doesn’t just allow planning for a single dive, but to safely plan for multiple dives.

I labored mightily over the three RDP multiple choice questions and ended up scratching out my initial answers for each before settling on entirely different choices. Even though I knew I already had enough correct to pass the test, I guess I just can’t help myself; I wanted to try to get them ALL right. And I did. 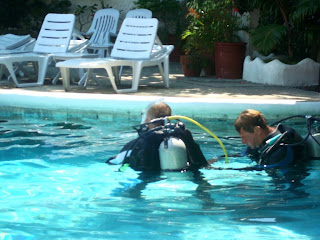 Paperwork completed and test requirements passed I reported back up to the poolside dive shack where Peter told me that he would immediately catch me up with his ongoing class consisting of two other basic students already two days into the course. That was just what I wanted to hear. I jogged back down to the room and suited up.

A few minutes later, attired in my diveskin and booties, I made a rolling bumping entrance back up the stairs to the dive shack area next to the pool pulling along my heavy wheeled equipment bag. The local Filipino fellows working there were surprised that a basic student would show up with all his own dive stuff. I found out later from my wife that they were even more surprised as I went through each of the tasks in the pool one after another without hesitation or trepidation. Basic students just aren’t able to do that usually. (Not that I was the run of the mill new guy basic student). 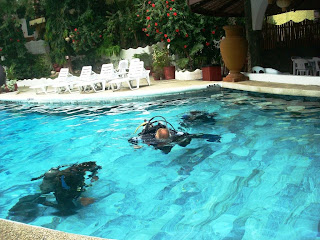 Later that night my wife related to me how the Filipino dive boys asked her who I was and why I did all the tasks so fearlessly and easily. Like she always does she told them I had been a US Marine. “Ohhh! THAT’S why!” was their response. “Those guys aren’t afraid of ANYTHING!” they told her.

I've found that Filipinos have an almost breathless respect for US Marines, referring to them as “matapang” or brave. And actually, they are probably mostly right. Being able to suppress fear and staying calm, focused and rational no matter what is a gift that I entirely attribute to my time in the Corps.

Regardless how or why I was able to do it, I finished all the task criteria that had taken the other fellows hours to get through in just over a half hour. I was almost disappointed when it was over. I really love the challenge of operating under and in the water, thus scuba diving is a natural fit for me. 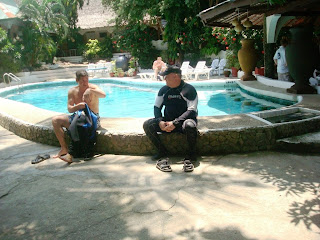 While I rinsed the pool water chlorine out of my gear in the dive tubs, Peter let me know that I should report back to the pool area at 8:30 am the next morning. I would meet my classmates and continue my training with a dive out in the waters directly out from the resort. ‘Good stuff!’ 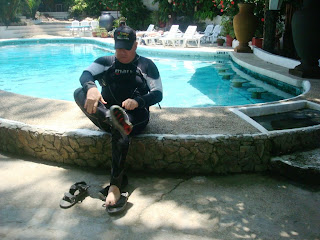 Posted by PhilippinesPhil at 3:34 AM