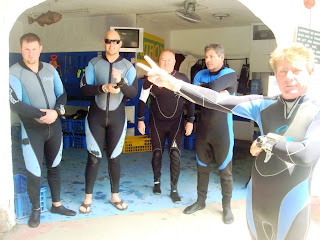 That first day of scuba training in open water was also my first time not in a pool with a group of other divers. It had a different visual feel from all my previous dives in the sea with just one fellow diver. Seeing all the other divers in front, around and behind caused my head to move as if on a swivel. I know I wasn’t really responsible for all my other dive mates but that’s what I’d been used to, so that’s how I operated, out of habit.

Instructor Peter led the way, with the three of us trainees following in a loose single file. Master diver Jamie watched over us from the rear while dragging along the “diver down” buoy to keep boats away. I noticed we were heading a bit to the right from our departure direction from the beach, toward the floating bar to the east.

Jamie had a bungee cord with a heavy washer through it strapped around the bottom of his aluminum tank. To get our attention he repeatedly rapped the washer against his tank. “Tink! Tink! Tink!” The noise carried for quite a distance. On our way out on this particular dive he began the metal on metal clatter. I jerked around to see why. We all did. Jamie had spotted a large sea turtle whose swimming path had intersected our course of travel behind all of us but Jamie. We took a short break from our intended track and checked out the slowly swimming turtle.

This one wasn’t as long or as bulky as the Hawksbill I had seen last year but it was still pretty big, probably just over three feet long. What made this new sighting even more exceptional for me though were the two amazing ribbon-like fish riding along as passengers. These long slender fish were colorful, I think bright blue or green. Their bodies snapped through the water like when female gymnasts snap their fluttering ribbons on a stick.

Mostly the two “turtle fish” kept themselves attached to the top forward bit of their transport’s shell, flickering along in parallel to each other, looking exactly like a pair of living gleaming banners snapping in the wind. But every so often one of the fish would dart a short distance from the shell for a second or two, perhaps six or seven feet away, before doubling its super flexible body almost in half and darting back to its spot on top of the shell. I really wish I could have had my camera with me, but carrying my Canon during training dives was out of the question.

I would have loved continuing to check out the turtle and its retinue but Peter only gave us a short time on this little side escapade. After less than a minute we were back on our merry way to the intended training site. I figured we were probably pretty close to it when Peter stopped ahead of us and just floated there. My God, but he is good at that. As I neared he released air from his BCD and settled to the bottom where he took up a position on his knees on the edge of a large open sandy area and motioned for us all to join him on our knees to his front right in the middle of the open sand.

I made my way over to Peter’s far left and expelled the last of the air from my buoyancy compensator to allow me to settle fully to the sea floor. The other two fellows also took up their positions in front of Peter, but not quite to his satisfaction. He wanted them full on their knees, not standing, crouching or floating. Once we were all in place the way he wanted, our period of testing began. Well, it was more a combination of testing AND instruction the way it turned out.

For the next 25 minutes he had each of us in turn perform a series of exercises. Our depth there at the bottom was right around 20 feet. Most of what he wanted us to do we had already done in the pool, but it’s always different, more daunting for some reason, in open salty sea water at depth.

None of what he asked us to carry out was particularly difficult; at least I didn’t think so, perhaps because of all my previous hours in open water. We executed each event one at a time observing each other’s performance. I admit that knowing I had an audience of my peers made me want to be as perfect and as in control as possible. It’s that macho thing I guess.

One of the first things he had us do, to me, was THE most unsettling. We had to remove the regulator, literally our very lifeline, from our mouth and toss it away, with authority, behind us over our right shoulder. We had done this in the pool and it had taken me two tries to retrieve it the way he wanted it done.

Here’s the drill: remove the regulator from the mouth and toss it over the shoulder; bend forward and to the right, placing the right hand on the right thigh; the next step being to sweep the hand behind the leg and then up. At this point the regulator SHOULD fall naturally in such a place that the regulator hose is caught up against the right arm as it moves upward. The regulator and hose is scooped directly to the front where it can be grabbed and replaced in the mouth; and sure enough, after my first failure (I had moved my arm up instead of behind), every time I tried it this way in the pool it worked as advertised.

After seeing how well that method succeeded in the pool I was confident I could do the same thing in open water. Peter pointed at me first and then mimed throwing away his regulator. I braced myself, took a breath, grabbed the regulator from my mouth and tossed it over my shoulder. Without waiting to see how it worked out for me Peter then pointed to the fellow next to me. I went through my regulator retrieval drill expecting the same results as from the pool, but to my consternation the reg was NOT there. ‘Damn!’ I went through it again and STILL it wasn’t there.

At that point I figured the reg must have gotten caught up on the back of my tank somehow. A touch of panic began to creep in around the edges which I resisted mightily.

‘Well, I’ll just reach down and grab my alternate regulator’ was my next thought.

Lifting my head to see if Peter or Jamie had a reaction to my problem, something caught my eye off to the right. I glanced up to see more closely and to my great relief found it to be my wayward regulator.

‘There you are! Get over here!’

I snatched it up and crammed it back into my mouth. “AIR! Yes!” I realized then that only a few seconds had elapsed from when I tossed the Reg. As I cleared it I watched the second guy throw his Reg away as I had just done. It was then that I saw that his regulator didn’t drop the way it does in the pool, instead, it floated up for a second and then hovered right around eye level. Sea water of course is more buoyant than pool water, and the residual air trapped in the regulator was enough to make it float in the sea water. ‘Eureka! Another lesson learned, the hard way.

From my conversations with them I learned that what really bothered the other two students was not the regulator coming out; no, it was the idea of having to pull off the mask, or even just having to partially flood it. The electrician told me he could take his mask off underwater all day long in the pool, but the salty water of the sea was so uncomfortable that he became completely unnerved he confessed. Both he and his fireman buddy dreaded having to clear their masks of seawater almost to the point of terror it seemed to me.

I took on the role of sympathetic comrade. “I know what you mean man. Once my eyes come into contact with that salty sea water, and they start to burn, I can’t see for squat.”

Now, what I was REALLY thinking was quite different. It was more like, ‘Come on man, buck up! It’s not THAT bad.’ I didn’t say it though. I really liked these two fellow Americans from Texas. They were good guys and no way was I going to say something that might come off as arrogant, especially since I was still relatively new at this stuff myself.

Peter pointed at the electrician last to have him throw his Reg. In fact, the instructor had to act out throwing it twice to get a response. It looked to me like the guy had gone into freeze mode. He kept taking deep breaths and then not doing anything. Finally he took one final breath but instead of throwing his regulator from his mouth, inexplicably, he grabbed his mask and violently pulled it off. I was totally perplexed as were we all.

I could hear Peter yelling into his regulator (He was REALLY good at doing that), “NO! NO! NO! Your regulatah!” Believe it or not, I could actually hear his Australian accent through the water.

The big electrician struggled to put his mask back on and began to try to clear it by blowing air into it through his nose while pulling it away slightly at the bottom to allow the air to push out the water. He did this three times but he was obviously having some kind of problem. He shook his head and took off like a shot for the surface. We all looked up, following him visually. Jamie did his job and went up to check on him while Peter continued with putting the other two of us through our paces.

Later, out of the water, the shaven headed electrical contractor said that he had become confused which is why he had removed the mask instead of the Reg. I’m certain it’s because he was so dreading having to remove his mask that he had become fixated on it. That still shouldn’t have caused him problems, except that water had entered his airway through his exposed nostrils and he began to choke and cough. He felt like he had no choice except to go up.

I remember when he had done that boneheaded thing that my main thought was, ‘Man oh man, I hope I don’t lose my mind down here like that. Please God, don’t let me screw up.’ Funny thing is, I wasn’t worried about the dangers of what we were doing; I just didn’t want to look stupidly incompetent. Guys are weird, aren’t we?
Posted by PhilippinesPhil at 1:47 PM