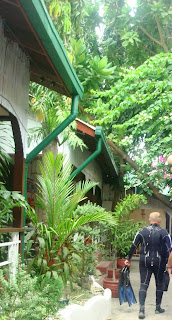 Once he recovered from his self-induced coughing fit it took less than five minutes for the electrician to return from the surface 20 feet above us. Dropping through the water he settled himself to his earlier position on the other side of his fireman buddy from me. This time when Pedro signaled for him to perform the tossed regulator exercise he did so with no problem.

On that dive one of the other more notable requisite undertakings we did at the instructor’s behest is actually a variation on the regulator toss. It is based on the scenario that a diver’s air supply has stopped, requiring immediate access to the dive buddy’s alternate air source. This very situation is a prime reason that smart divers always do so in pairs.

When it was time for me to practice what to do in case of the dreaded “out of air” emergency, instructor Pedro approached and parked himself directly to my front where he immediately indicated that I was to perform the “out of air” drill.

First, using my right hand, I sawed across my throat using the age old gesture for dead or kill. In diving however, the kill gesture means “out of air.” I then pointed at his spare regulator, which in his case was stowed right on the front of his vest at chest level, and then made as if I was putting a regulator in my mouth. 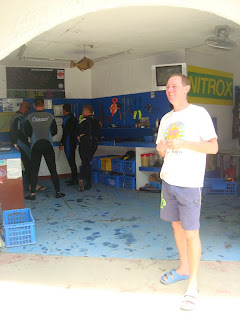 He made the okay signal signifying he understood and pointed at the spare regulator stowed on the middle of his chest. I removed my regulator, allowed it to fall, and then, taking Pedro’s extra Reg from its stowage clip on his front, I placed it in my mouth and cleared it.

As soon as I had Pedro’s extra Reg cleared and I was breathing okay, I grasped his forearm with my right hand in a Roman handshake and gave him the “up” signal by pointing upward with raised left thumb. Joined in this fashion facing each other, to conclude the scenario we swam slowly to the surface. All three of us students took turns accomplishing this.

Of course there is an important reason for going through all these at times uncomfortable sets of diving circumstances. It’s simple, one can know and understand intellectually what is supposed to be done IF something bad happens, but until the steps are actually tried in the real open water setting at depth, there is a good chance that when bad things ACTUALLY happen that panic WILL rear its ugly head.

Obviously, panic is NOT a good thing to experience, especially while diving, for once panic sets in the mind ceases to function rationally. The problem though is that being in trouble in the water will almost always brings on a case of the panics, UNLESS that person has trained for what to do in case of THAT specific problem. 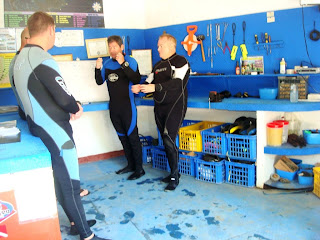 Thus the dive problem exercises, because even better than thinking a problem through is being able to get through it using muscle memory, where the body goes into instinct mode once it’s assigned a task. But THE only way to establish these instinctive muscle memories is to put the body through its paces BEFORE the emergency so that later the mind doesn’t have to do much except to push the “go” button.

A buddy who did 25 years as a navy diver once told me that it was his experience that humans at depth, breathing compressed tank air, lose a quarter of their brainpower. He couldn’t explain WHY he knew this to be, but the longer I observe myself and others in the scuba environment, the more I am agreeing with him. Perhaps its because of the properties of the compressed air, or maybe it’s the effects of pressure on the brain. Personally, I think it has more to do with just being underwater. The primitive human down deep in each of us just can’t accept being submerged; so, an internal struggle goes on between this ancient primal us and the modern rational us, and it results in reduced acumen.

All that goes to help explain why so many of us tend to lose our minds when we find ourselves submerged in water; even with a breathing apparatus we can still “lose it.” Is it any wonder that water boarding has been found to be one of the most successful ways to crack even the toughest person’s will? 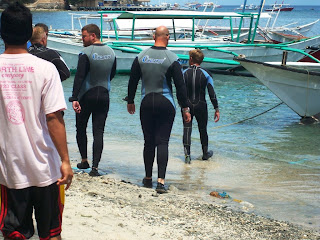 Therefore, the human tendency to react at the first hint of a problem underwater by going for where the air is, MUST be controlled. There really is only one way to do this and that is to place beginning divers into situations that MAKE them experience various types of discomfort, such as removing the air source from the mouth, or taking off the mask and forcing them to swim to the surface without it.

Once the trainee has gone through these unpleasant conditions however, and they’ve proven to themselves (to their inner primordial self) that they CAN go through them and survive, the battle is won. Well, hopefully it is. Sometimes, the only way to know if you will actually react properly is when a bad thing actually happens. In the meantime, all one can do is prepare and to continue to prepare. With me being the eternal pessimist, I ALWAYS assume that these bad things WILL happen, so I tend never to stop preparing. 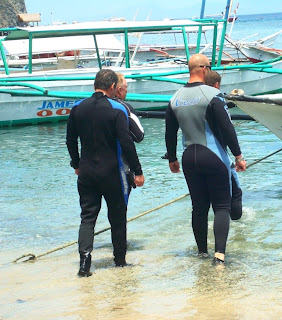 For instance, let’s say a freak monster current smacks into you at depth plowing you ass over tea kettle into a pile of coral. Your mask comes off and your Reg becomes damaged and unusable. First of all, scuba diving with a mask is nothing like scuba without one. A mask does two things, it keeps the eyes free of water for clear vision, but even more importantly it keeps water from entering the airway through the nostrils. Just ask my classmate from my last post about how bad THAT can be!

So, two of the worst imaginable things have happened at more than 60 feet down—your mask is gone and you have no air! What do you do? Well, if you’ve been trained for these things as all basically certified PADI open water divers are, it really should be no problem. You think it through step by step.

The first thing is to get some air, either your own spare source, IF it’s still okay; or hopefully, your dive buddy is right there waiting to give you his spare Reg. 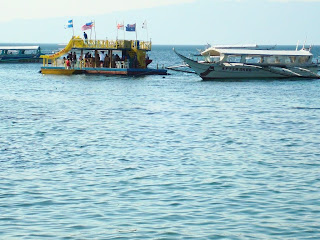 But what do you do if that crazy current has swept your buddy too far away to be of any help and the collision with the coral has wrecked the air valve on your tank so that even your spare is no good? Of course, you must head to the surface so you can breathe again, but, you must avoid panic and remember your training.

A mad dash for the surface could well kill you if you forget what you’ve learned, the primary thing being that air breathed into your lungs from a tank at 60 feet down will expand the lungs almost twice their size by the time the surface is reached. At that point you will likely die from burst blood vessels in your lungs, and it won’t feel good either. 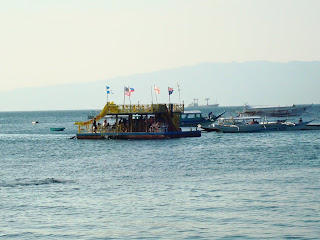 But I don’t have to wonder what it feels like to lose my mask or to be at depth with no regulator because my instructor had us practice responding to all the variations of that very realistic scenario. Aside from having us ascend using another diver’s alternate air source, Pedro had us try on for size several other emergency possibilities. For instance, we had to swim with no mask, a very strange feeling indeed, since you have to consciously keep positive air pressure in the nose to keep water from entering the nostrils. (I suppose you could also just hold your nose, but I never did find that to be necessary using positive nose pressure). We also had to demonstrate the learned ability to ascend from depth without suffering lung injuries. It’s actually quite simple, as the diver rises he releases air. I liked Pedro’s preferred method of doing this much more than the way it’s demonstrated in the PADI video clips where the ascending diver makes a continuous “ahhhhh” noise. Instead of doing that, which might cause a diver to run out of air, Pedro had us make a “Bup” sound repetitively. “Bup. Bup. Bup. Bup. Bup…” This allows the expanding air to escape from the lungs while also giving the diver more control over the air’s release.

Posted by PhilippinesPhil at 11:33 PM