Killology versus Spirituality, Ne'er the Twain Shall Meet? 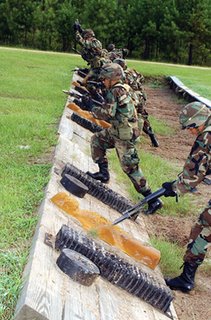 I received an offline email in response to my last post, “Ugly Training, End it NOW.” I think it’s from an old Air Force squadron mate. Hopefully he won’t mind me excerpting part of it now, because he makes some interesting assertions that I’d like to address.

“I READ YOUR ARTICLE REGARDING THE YOUNG MARINE AND THOUGHT I MIGHT PUT MY TWO CENTS IN ON THIS. FIRST, I THOUGHT YOUR RESPONSE WAS ABOUT FIFTY YEARS OUTDATED BECAUSE IT REFLECTS THE MINDSET OF THAT TIME. MILITARY STUDIES ON KILLRATE INDICATED LOW PARTICIPATION FROM SOLDIERS DURING WWII DUE TO THAT CHRISTIAN UPBRINGING THAT YOU REFER TO. I BELIEVE THE RATE WAS SOMETHING LIKE ONE IN THREE. IT ALMOST SEEMS SACRILEGIOUS TO SAY SUCH A THING ABOUT OUR GREATEST GENERATION BUT IT'S TRUE. ONLY ONE IN THREE SHOT TO KILL AND THE OTHER TWO SHOT INTO THE AIR IF AT ALL. THE KOREAN WAR WASN'T MUCH BETTER. THIS STUDY WAS DONE AFTER THOSE WARS. THE MILITARY DEVELOPED THE STYLE OF BASIC TRAINING THAT YOU WENT THROUGH TO IMPROVE THIS. THE WAR SHOWED AN IMPROVEMENT WITH AN INCREASED KILL RATE OF 80 PERCENT. WHEN THE DESERT WARS OCCURRED THE KILL RATE WAS ABOVE 90 PERCENT. OBSERVATIONS AND STUDIES DONE DURING BASIC TRAINING INDICATED NO HESITATION AND EVEN A RELISHMENT IN PARTICIPATION IN KILL TRAINING. INTERVIEWS AND STUDIES INDICATE THAT SINCE THESE SOLDIERS WERE SQUIRTS THEY WERE INUNDATED WITH AND TELEVISION VIOLENCE AT AN AGE WHERE THEIR MINDS COULDN'T DISCERN BETWEEN REALITY AND FANTASY. PLUS THROW IN A GOOD DOSE OF COMPUTER GAMES, GAMEBOY ETC. AND HOW DO THESE GAMES KEEP SCORE? BY KILLRATE OF COURSE, BUT WITH LITTLE OR NO CONSQUENCES FOR COLLATERAL DAMAGE. I KNOW I'M BEGINNING TO RAMBLE AND I'M SURE YOU CAN DO BETTER RESEARCH THAN I CAN AND YOU CAN SEE WHAT I'M DRIVING AT. THE SIGNS ARE THERE.IE: GANG VIOLENCE, SCHOOL SHOOTINGS AND IT'S NOT JUST OUR COUNTRY BUT ALL OTHERS WHERE SIMILAR MEDIA IS AVAILABLE. HERE IS A SITE THAT MIGHT BE OF INTEREST WWW.KILLOLOGY.COM/PRINT/PRINT_TEACHKID.HTM HAVEN'T GONE FRINGE OR FANATICAL JUST A QUIET OBSERVER WHO WONDERS WHAT NOW. ANYWAY THAT WAS ABOUT A NICKEL’S WORTH SO YOU OWE ME THREE CENTS CHANGE.”

Is that you GamPat? If so, I wondered when I was ever going to hear from you again. Glad to see your still out there kicking around my friend. I miss those fascinating stories you used to tell on night shift.

Nahhh. I buy very little of the stuff you claim. Christian upbringing notwithstanding, the reason men didn't shoot, or didn't shoot "well," is because of the lack of thorough "realistic" training. The Corps has rarely had a hard time with this, but the marine’s success with producing "dead eye shooters” is not due to instilling a beastly nature in its troops. Not shooting one's weapon has been a problem of the “average” infantryman at least since the phenomenon was first documented in the American Civil War. Men would load and load and load and never shoot. It’s because they trained mostly to load, and then didn't fire that load in a realistic setting in training. It wasn't part of the "numbers" to aim at a human being and pull the trigger. The result was they “froze” and couldn’t do it in real combat. No, fear is what causes men not to engage the enemy, not the supposedly inhibitive presence of values and principles. But fear can be overcome through muscle memory—not by simply promoting bloodlust and meanness, although on some level I'm sure that can also be effective. The problem is we CANNOT fight an insurgency with simple rampant bloodlust. It’s just not allowed, as PFC Jodka and his mates have learned.

Marines will never have a problem getting their riflemen to kill. Few people join the USMC for the GI Bill or to “see the world.” I joined, and many like me did as well, because of the desire to be a marine just like John Wayne was in the movies, and I KNEW and I understood that killing was likely a part of the bargain. But I never saw John Wayne kill because he enjoyed it or with any bloodlust involved, and I certainly never heard him say degrading things about women and girls. My idealistic “John Wayne Bubble” was soon burst; however, when I joined the Corps and was literally shocked by the things I heard said and pushed on me as my new "marine-way normal." For instance, how would constantly haranguing me about f*****g my mother (literally), or my sister or a baby, make me more willing to kill? It wouldn't, but it would serve to undermine baseline principles when constantly bombarded with that kind of profound decadence. And keep in mind that that sort of profane talk continued around me throughout my entire 5 years as a marine. Why is it like this? I asked then and I still ask.

I agree that men who have been schooled their first 18 years of life with the Judeo-Christian concepts that killing is against God's law MUST be "taught" how to make themselves do otherwise. So be it. Just the same, all that can be instilled without completely giving in to the "animal" within. Pat, I'm sure you were around Marines, but not as much as I was. The culture in the USMC is startling to those who haven't "grown up" in it. What a relief it was for me when I joined the AF. It felt like I was back in civilization. I hate to say it, but there were very few "noble acting" people in the "green machine," not even me. Those that were continuously upright in their actions and words seemed to be in the minority. For a while I caved in to the wantonness myself. I was just a kid and wanted to belong, so there it is. I observed a culture of brutality, perversity and incivility—when I was in we called it "hate and discontent," but there was more to it than that.

What I am saying is that the obscene bloodthirstyness that you say is necessary for marines and soldiers to be effective fighters, according to this study that you quote, probably needs a paradigm shift, especially when fighting police actions, which is what an insurgency mostly is. I think this shift can be done by the Commandant coming out and declaring that officers and NCOs from now on are expected to comport themselves civilly at ALL times, and that they will be expected to expect the same from THEIR men and women. Is that possible? I say yes, but because it will mean changing a foul culture born of tradition it will take many years for it to reach fruition. So, the sooner he starts the better!

But you know how I know it IS possible? Because when I was a Marine Embassy Guard we were "forced" to act like "normal" people at all times and we were forbidden to allow ourselves to "revert" to our old marine selves. Most of us who got through the did that just fine. We watched our language and behaved 24 hours a day like gentlemen (mostly!); otherwise we were relieved from duty and sent back to the FMF. Marines are expected to follow orders after all. Underneath the “civilized” veneer we were still "professional" marines and we were always ready to go into action, but under the stricter rules of the State Department. Based on my experiences as an MSG there's no reason we can't turn out "professional" fighters and still allow them to maintain their ethical foundation. In reality, that is EXACTLY what we DO expect from them. What is happening to PFC Jodka is a case that proves that point.

What you seem to be claiming is that we can't have it both ways. Pat, do you really believe we cannot field an army and a marine corps without allowing the troops therein to maintain a modicum of basic decency and moral underpinnings? It seems to me that we need to get the psychiatric, psychologic and chaplain communities involved with developing the training so that we can still turn out trigger pullers and bayoneteers that will fight our wars without "going too far" and committing atrocities like the one that started this conversation. And as I intimated above, a new culture of civility and decency should be "encouraged" to continue throughout the Fleet long after bootcamp and specialty training is completed. The conversation quoted in the AP article between Jodka and his marine squad mates tells me that the crap I used to listen to is still rampant in the ranks. I can’t imagine John Wayne talking like that. It’s too revolting and indicative of underlying indecent values. People’s actions tend to reflect their speech and vice versa. We ARE what we say. THAT is mostly my entire point here. My time in the marines makes me to this day mindful of my speech, because I NEVER want to talk like that again.

And what of spirituality and the lack of it in these “secular progressive” times? These days our "less religious" society "turns out" teens with a very limited morality set compared to just 30 years ago when I enlisted. Its old fashioned, but the fear of God is what keeps a lot of us on an ethical path, that and the fear of earthly punishment of course. Either way, these modern, less "Godly-minded" recruits are naturally more susceptible to the depravity that unfortunately IS the reality of the Corps. Most of us manage to hold on to our basic concepts of decency learned in our early lives, but now more often than not, kids of today raised with fewer moral boundaries are likely to "give in" to the depravity, especially in a stressful and violent combat environment, which ironically is exactly the place we EXPECT them to have the MOST control of their actions.

If this study that you quote is true, if we cannot train men to fight without “animalizing” them first, then we should never seek to punish them when they “go too far” as this squad surely did when they murdered the innocent Iraqi man. But I don’t buy that teaching a “pure kill attitude” is absolutely necessary for 90% combat efficiency. Part of the training should INCLUDE the maintenance of our spiritual aspect. My God, we should promote some form of spirituality, so that our men can come to grips with the internal turmoil that is sure to follow when they have to kill. We can’t just subvert their learned morality before graduating them to the field, as happens now, and THEN hope they are able to deal with the consequences later on their own. Otherwise, chronic depression, guilt and anxiety are sure to follow. As a matter of fact, that is exactly what is happening.

Posted by PhilippinesPhil at 10:04 PM