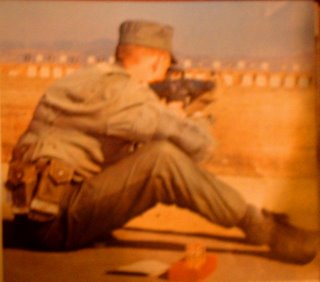 This letter is one of my favorites. I was upbeat and excited. The training was fun. I loved firing the M16. To me, it was the best weapon in the world. My last entry was written on a Sunday late in the morning. I had just come in from washing my dirty utility uniform and skivvies. Unlike the recruits training out on the East Coast in at , we didn’t have washers and dryers. WE were the washers and dryers. After three months of that, all my white underwear was hopelessly dingy and had to be tossed.

I just got back from firing. Today was the second day on the range. I’m improving but I’ve a long way to go before I’ll be able to qualify this Friday. I’m not the worst one in the platoon by far though. I don’t know if I should be reassured or not. (more later) 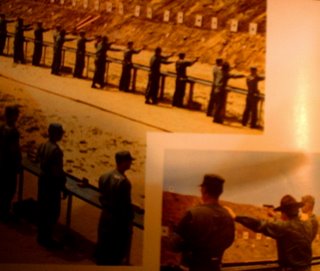 We just came back from firing 5 rounds with the 45 handgun for familiarization. You should see how large those rounds are for such a small weapon. Those rounds go in you on one side and come out the other side of you making a hole as big as a basketball. We only fired them from about 25 to 30 yards away. I still couldn’t hit the bull’s eye. I was nervous I guess. It didn’t really matter. I was just fam firing. (more later)

Yesterday I qualified expert on the range with a 224. Too bad it doesn’t count till Friday (the 15th). Today I only shot a 213. That would only qualify me as sharpshooter. I shouldn’t have any trouble qualifying now. Shooting is easy, especially when you’re using such a magnificent and effective weapon as the M16. Just think, I put 8 out of 10 rounds several times into a little black disk at the 300 meter range. That disk is only about 12 inches in diameter. I’ll add to this letter tomorrow and tell you if I qualified or not.

Dad, in the Air Force basic training how much emphasis and time did they place on the rifle and marksmanship stuff? The only hard part about it is snapping in. It’s not so bad on the range where you only hold the position for 6 – 8 seconds and usually less that it takes to fire off the round. Then you get to “release” yourself from the position to call and then plot and reload. I say “release” because you are literally a captive of the position if you do it right. I’ve found though, that no matter how loose your position is, as long as you good sight alignment and sight picture, you’ll hit exactly where you aimed when you pulled the trigger.

Well, guess what? Not only did I qualify, but I shot a 218, which makes me an expert rifleman with the M16. Yesterday afternoon our series got into a formation and 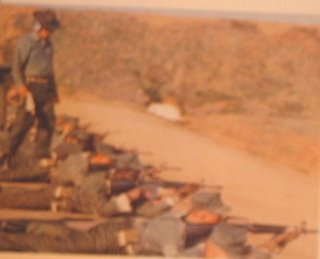 platoon by platoon the experts of each platoon went front and center to receive their expert medals by the series commander, Capt. Rivers, himself. It was kind of exciting. There were only 10 experts in our platoon of 77 and I finished in a tie for fourth. And to think I was worried about qualifying. I still can’t believe it. Here I never hunt and have never shot a rifle except for 13 rounds with a .22 and I go and beat al those “great white hunters” in our platoon. Some of them even had trouble qualifying.

Today marks the exact halfway point of bootcamp, T-39. We marched over some pretty steep hills today about 15 miles from Edson Rifle Range to ITS (). This should be our last really tough obstacle. I believe tomorrow or the next day we get to go into the gas chamber and take our gas masks off. We’re going to learn all kinds of things here. I’ll write and tell you about them as we do them. We don’t start official training until Aug 18.

On Aug 30 we leave ITS and go back to at MCRD (home sweet home)! Things should be easy there after what we’ve gone through and will go through during the next two weeks here.

When is the exact day of the Haley reunion? You never said, I don’t believe.

I’ve got one complaint. I don’t get enough letters from you guys. I’ve got to know what’s going on around there. (later)

When are you going to start sending me some pictures? I don’t care what they’re of—the dogs, the garden, the reunion, the family, anything. Sometimes, I have trouble bringing a picture in my mind’s eye of what everybody looks like.

When I get back home, I doubt whether I’ll be able to drive. After being out of the driver’s seat for 3 months I’ve forgotten how. Besides, there’s no insurance on me any more.

Here at ITS it’s a lot like . The landscape is anyway. There are a lot of high steep hills and ridges. The foliage is very low and there aren’t any high trees. It still hasn’t rained a drop since I got here in June. It’s really weird. I guess in the winter it rains all the time. I didn’t pick such a bad time to come after all. I’d rather train in dust than mud.

Did I tell you I got a letter from Kevin Courtney and one from Henry Gaudreau? Those two are so much alike in character and it really shows up when you compare their letters.

John Roe, Mark Colpean and I have got everything planned about what we’re going to do when we get back to good old Birch Run. Well, not really everything, just the day after we get home. We’re going to go up the high school and say hello to the teachers. I’m going to go the Exit Restaurant and eat a nice slow leisurely meal.

Well, the DI just came in to the squad bay and told us we have church services in 15 minutes, so I’d better get my boots and brass shined. I just came in from washing and hanging up my dirty laundry. Boy have you people got it made. 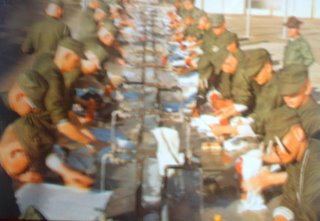 P.S. Henry G and Kevin Courtney both said they saw Kevin Spear out running. Keep it up Kevin. It’s not that long till X-County Season. You’ve probably already started practices. Write and tell me who is out for it this year. Is Chris Hollerback home yet? 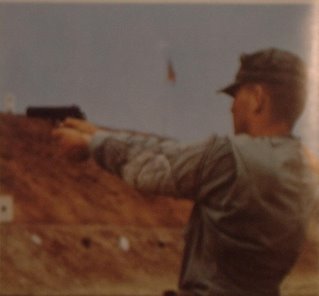 Posted by PhilippinesPhil at 10:36 PM

"We were the washers and dryers." That made me smile. My middle son would sometimes complain when it's his turn to wash the dishes and he'd ask me when are we ever gonna buy a dishwasher. I'd tell him that we already have 3 dishwashers. He and his 2 brothers. :)

Niceheart, you do understand I was talking about clothes washers and driers, right? Regardless, congratulations on getting a dishwasher. My brother and sisters and I washed our own dishes from the time we tall enough to reach the kitchen sink, standing on a stepstool that is.

Phil,
Came upon your blog by accident in letters to home from 1975.
Sounds like life is good for you!
Please reply
Chris H. (Birch Runner)

Chris Hollerback? Is that you? Get out! How you been? A lot of people have been looking for you man! Drop me a line. pjspear1@yahoo.como