Let’s say a guy gets a haircut just like he always does every three or four weeks, and also just like always, after this particular haircut his girlfriend combs some color into his hair. She does this to mask the fact that he no longer has any natural color of his own to speak of. This process has gone on for months, even years, with no problems. Then, out of no where, something BAD happens. 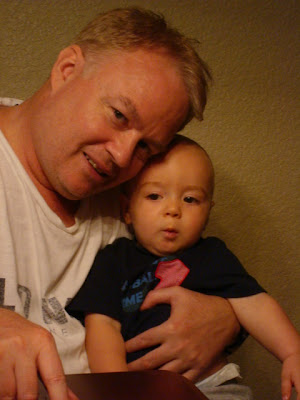 The Way the hair is SUPPOSED to Look (Cute grandson, right?)

After the prescribed time the guy’s girlfriend tells him to go wash out the color creamer. He does so and towels off in front of the mirror. To his shock he sees that his hair color is now Crayola yellow. He looks like a human canary, a tweety bird man, a living cartoon.

“Hey! What the heck did you do to my hair!” he yells coming out of the bathroom.

His girlfriend is equally flabbergasted and defensively explains, “The store didn’t have the same brand, but it says it’s the same color on the box—golden blonde! I don’t understand!”

“Well, there’s no way I can go out looking like this. Get the scissors. I’m going to take it all off and start over.”

“No way!" She objects. "I like you with hair. I’ll call my hairdresser friend and see if she’s got something we can use at her house."

She makes a call and out the door she goes. In 30 minutes she returns with a premixed bowl of what she calls coffee brown hair color. “Sit down, I’ll put this in,” she orders.

He shrugs sitting, “Okay, well I guess it can’t get any worse than the way it looks now.” (Oh yeah, you think so, eh? heh heh)

As she applies the brownish cream, now the problem is that the guy’s scalp feels like its on fire. The chemicals in the mix are meant for a single application, not two doses in two hours. He can barely sit still as she combs on the caustic cream. He’s a man, a tough guy, so he tries to keep the groans down to a dull roar (with only the occasional whimper).

To take his mind off the pain he attempts to get lost in a game of Bookworm, and it works because soon she tells him it’s time to shampoo again. The warm shower water reactivates the pain in his scalp. Once again he barely contains the groans. His hair is now stiff with chemicals, so he tries a couple applications of his girlfriend’s cream rinse. It doesn’t seem to do much except to make a big thick puddle of white foam all over the shower floor. With a combination of hope and dread he finishes toweling off and takes a look in the bathroom mirror.

His hair is now a stunningly bright strawberry red. A red that would make Conan Obrien proud, however pride was the last thing that this guy felt. 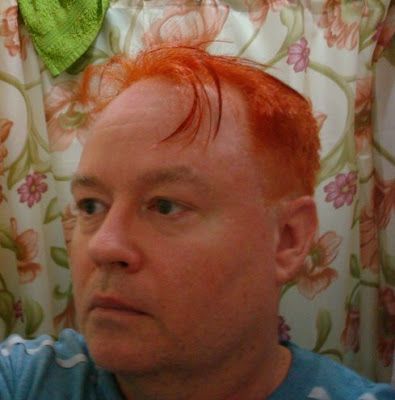 His girlfriend, feeling that all this is her fault, moans, jumps into bed, pulls the covers over her head, and cries out how sorry she is.

The guy begins to see the humor in all this and laughingly declares, “Okay, that’s it; where’s the scissors? I’m taking it off!”

Jumping out of the bed she proclaims loudly and insistently, “No WAY! I’ll take you first thing tomorrow to the salon at Robinson’s and get them to fix it.”

“But I’ve got appointments lined up tomorrow morning. I can’t wait around all morning while they mess with my hair. Come on, let me cut it off. It’ll grow back in a couple months.”

She insists that bald is out of the question, so the guy texts his counterpart and explains the ridiculous details. His cohort is mildly amused and agrees to hold the fort.

The next morning, before the place is even open for business the guy and his girlfriend show up and become the salon’s first customers of the day. A male hairdresser has a card display with all the color possibilities. It looks promising. The guy points out the color he’d like—it’s a shade of brownish blonde, the color he normally goes for.

The attendant says it should only take 30 to 45 minutes and soon is applying the chemicals. The burning is almost more than he can bare. After a while the pain mostly recedes and he settles in for a wait. After 15 minutes it looks promising. In the mirror he can see that the doll hair red is now turning to brown with blond highlights.
“Hey, this might work after all!” he remarks to his girlfriend now taking the opportunity to get a manicure. She smiles and nods back happily.

However, more minutes tick by and the guy can see that his hair is now turning almost black before his eyes. He gulps in consternation. “Hey, you guys, its getting too dark. I don’t want it dark. Do you hear? NOT TOO DARK, okay?”

The young fellow managing the color treatment takes a look, “But Sir, the roots are still red; it needs more time.” He adds more color and more minutes go by.

Its been well over an hour and the guy is sick to his stomach at what he now sees. He knows his hair is now going to be an unnatural dark brown and there’s nothing that can be done about it. He grits his teeth and shakes his head.

The shampoo process is every bit as agonizing as the initial application. Back in the chair the hair color attendant examines the finished product and in Tagalog remarks to the guy's girlfriend about the “sugat” all over the guy’s scalp. (sugat means bleeding sores or wounds) The three doses of acid like chemicals in the space of half a day have caused areas on the guy’s scalp to split open and seep blood, not to mention that the entire scalp is red with irritation.

But the real agony for the guy begins the moment he sees his hair. It’s atrocious. The color doesn’t come close to that promised from the sample card. It is now a blackish brownish shade from salon hell. He slams his cap back on and stalks out of the salon. 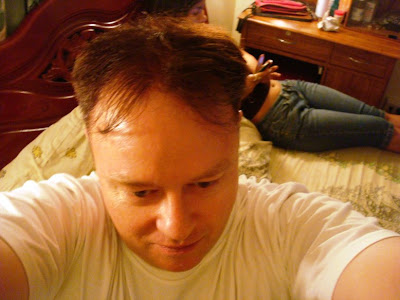 Xx Can You Believe I PAID for that color? Now what? 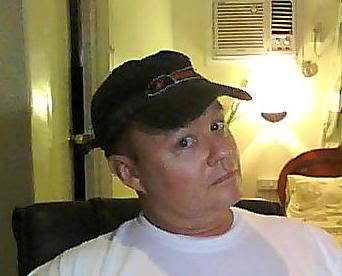 “Well, it’s barely better than that nasty red, but I’m still wearing this cap everywhere I go,” he tells his girlfriend irritably. “I just hope you didn’t pay too much for that, because they SUCK!” 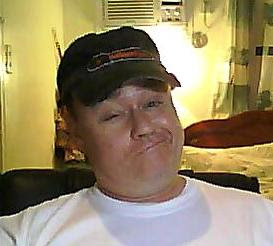 XXXXXXXNothing he can do about the face though! Ugh!

Posted by PhilippinesPhil at 1:00 AM

I about bust my gut laughing at the red hair. I don't waste a lot of time on my hair. I just give myself a crew cut with the number 2 attachment now and then and when it fades from blonde to gray, so be it. I'm not going to mess with dyes, especially after reading this post.

That's right; yuck it up laughing boy. And the proper word is color. We don't use the word dye. My girlfriend owns my hair; I'm just along for the ride. She's the one that insists on wasting the time on it. Only fair, since I control what she does with hers. I like it LONG!

Oh baby...
laughing and crying and choking back the tears streaming....
i
am
so
sorry.

I'll come back later.
ohmigosh...
still
absorbing
and trying to be supportive.
Those pictures were so not fair in terms of keeping an kind of self control under...well
control.

Easy now. Wouldn't want you to bust a gut!

OMG that fireplug red is even worse than mine used to be naturally and I got lots of jokes. Keep the ballcap on for a while...snicker snicker.

Im laughing with you honest!

Yeah, yeah, sure you are David. Yuck it up laughing boy! Glad to make your day people...

So THAT's why you were wearing the cap when I saw you. It did seem odd for you to be wearing it indoors but I didn't want to ask. Hehe! Oh well, as you say, it'll grow back. At our age we are maybe lucky to still have hair.

Dad...I have no words. Only laughter escapes me now!! I thought I have seen and heard it all from you!! But then you go and do this...Sometimes I don't know why you try to hide the fact that you are no longer in your 30's!! Maybe this will be a lesson learned...and if that salon was a good one...they would have made you wait a couple of days or weeks before trying to do a "fix" on your hair!!

But I know what you mean about not being about to say no on what she wants on your hair...Barry likes my hair long too. So, I know what it is like to not be able to do what I want with my hair!! Even if I feel like I look horrible...

I love you pops...gray or no gray!! And so should everyone else!!

Glad to make ya laugh so hard; its good for the soul!

My hair is no longer gray; it is completely white. No thanks. Anyway, didn't you like my hair color the way it was in the pic with Damien?

Lesson learned? Yes. Try it out first in a small spot of hair first!

Actually, now that I'm used to it, the darker brown is not all that bad. I think I'll go to a chestnut next though.

I'm not allowed to be a little vain? Someday, when yours starts to go white, remember your teasing me about me coloring MY hair. At least I don't hide the fact from anyone. I tell everyone straight out its what I do...

Congrats on Baby Lance.. I'm really excited for us...!