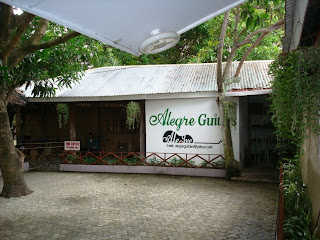 It was raining steadily by the time we left The Magellan LapuLapu Monument. Pete and I are sticklers when it comes to time and within a split second of each other we both came up with the fact that we had just over an hour left on the three hours on our taxi. I had remembered going to see a guitar factory during my last trip to Mactan back in 1985 and mentioned to our little group that it might be nice to check one out before heading back to the hotel. No one objected, so off we went.

The driver took us to a place called Allegre’s Guitar. It was nothing like the crude dusty so-called factory I remembe 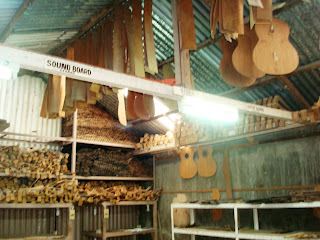 red seeing before. That one had been nothing but a barn-like wooden building with a tin roof. Inside, about a dozen men squatted on the floor in a huge pile of saw dust and wood chips. It must have taken them weeks to build up so much. It was messy, but it was impressive to see.

By comparison to that place from long ago, Allegre’s is nothing if not professional. There is nice place to park on the outside of the factory wall and a greeter meets and escorts guests into the factory. A lot of work and thought has gone into the displays. 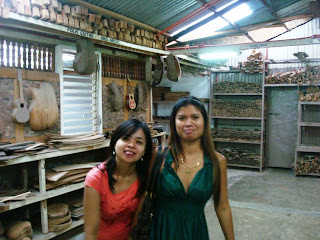 our tour of Allegre’s; from them you get a good idea of what they attempt to accomplish with their museum-like exhibits. All the different components are shown before they go into final assembly. If you are a carpenter or woodworker of any kind, such as a furniture maker, you will probably take a lot of interest in all the different types of wood they have. They have everything from oak and maple from Canada to various tropical hardwoods from right here in the Philippines. 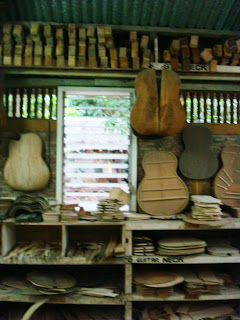 ears ago at that less sophisticated factory, Allegre’s also puts their woodcarvers, assemblers and painters on display as they demonstrate their craft. Also, just as I recall from that earlier trip, hardly any sound is heard other than the quiet rasp of file or chisel on wood, or the almost silent shushing of sandpaper. I didn’t see a single power tool of any kind, not a jigsaw or drill press one, thus the peaceful silence, not something you’d normally expect from a factory. I doubt that they could get any more low tech, but I think that’s actually pretty cool.

The one thing that Allegre’s has that I don’t remember from my earlier visit is a glitzy show room. And the neat thing about the show room aside from all the very beautiful guitars, ukuleles, mandolins, and other stringed instruments on display are the fellows that show them off and skillfully play them for you. W 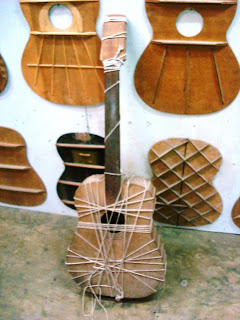 e spent more time looking at these exquisite instruments and listening to the showmen play them one after another than we did in the actual factory.

Watching them play so effortlessly turns out to be a very effective sales ploy. I don’t play anything, but while watching our guide, and now salesman, play a ukulele as if it was almost playing itself I developed a hankering to have one. I was surprised at the rich sound he made come from it, not all plunky like I thought.

Intently, I watched him play one made from a richly dark mahogany. Amazed I asked, “All that great sound from a ukulele; I can’t believe it. How much would something like that cost?”

Without stopping his g 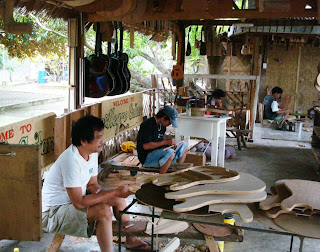 raceful strumming of a Filipino folk song used to dance the tinikling, a traditional Filipino dance, he answered, “Only 10,000 pesos, and that includes a really nice carrying case.”

“Oh man! I don’t have that kind of cash on me. If you took credit cards I’d probably have to get one though.”

Divine laughed, “Ha! He got you! Now you gonna buy one?” 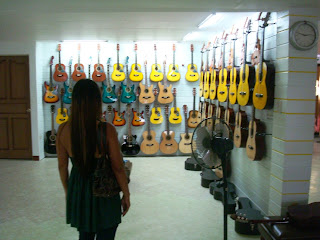 nd buy one I did. It’s a beauty!
Posted by PhilippinesPhil at 4:21 AM

Playing the guitar has always been something I have wanted to learn. I bought a cheapo about ten years ago and actually took lessons but after three my instructor quit and moved away. Not sure if my playing had anything to do with it but that ended my venture into guitar playing. Perhaps someday when I am retired. So do you think that you now own the future's next Les Paul?

Sure. Maybe the ukulele version of ol Les.

Growing up in Northern Mindanao, there wasn't a kid in our circles who did not own a guiter made in Cebu, whether they knew how to play it or not.

And when the uke became in vogue, everyone had to have one too. And it definitely was a lot easier to learn the uke. Four strings against the guitar with at least six.

Guitar-making in Cebu has a very long tradition. But I wonder how well they are now accepted by the locals. You go to the malls and instead you see these electric guitars made in China.

You have to look really hard to find something to buy in the USA that's made in the Philippines. Used to be all baseball gloves were made here. Last time I looked though, even those were all made in China.

Was stationed in Mactan AB 1967-1969 and bought a nice guitar then... it has since gone to my brother. We, my wife and I, who is from Mactan, went back in 1989 and visited this same factory but because of baggage restrictions ended up buying a small guitar from Lincoln's guitar shop downtown Lapu Lapu. It is still a wonderful instrument and has magnificent volume and tone after all these years!

I've always wanted to talk to someone once stationed on Mactan. Do you have any photos posted or available from when you were there? I'd love to see them and hear what it was like there then.