Far be it from me to expect perfection, still...

And speaking of hyper-critical, let’s talk about the hotel we stayed in on Mactan, a pretty nice place called The Crown Rege 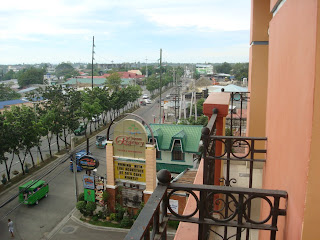 ncy; well, it was mostly nice.

First, some good things: The suites are spacious; they include two bedrooms, one with its own full bath; a full kitchen (not a kitchenette) with all the basic appliances that you’d expect; a good-sized living room/dining room; another separate full-sized full bathroom; and finally, a total of three verandas—all for 6000 pesos a night, or just over $125.

And here are some more good things: A beautiful big ol’ well-maintained pool (with nice landscaping), free internet access in all bedrooms, a fairly well-equipped fitness room free for guests, and on the roof (I think about the 10th or 11th floor) a fancy-schmancy spa with “reasonable” prices (reasonable being relative). Oh, and let’s not forget that breakfast is gratis as well, with eggs made to order by a pretty good chef staff.

The price per day isn’t too bad I suppose, if you consider what you get. Still…

You’d think that the person in charge of putting someone in charge of selecting the furniture for a hotel that might rate a star or two would put more thought into it, because I spent much of my time in the room scratching my head and chuckling at the obvious deficiencies (chuckling, because if you didn't laugh, you'd scream).

For instance, I’m a TV hound—the first thing I do is look for the remote upon entering any hotel room 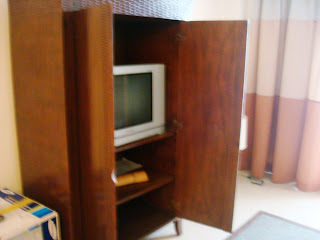 . Check out the picture of the TV cabinet in the living room. This idiotic cabinet has two doors that do not fold all the way back. Therefore, the only way to see what’s on is to sit directly in front of it. I’m sorry, but that’s just plain moronic. It’s like watching TV down a tunnel. I never once spent time in that room, seeing that silly TV with its wooden blinders overloaded my BS detector; it was more than I could bare.

Then there are the beds! They look great made up and all, regal even, but they are WAY too tall, unless you happen to be over the height of 6 feet. Well, my gir 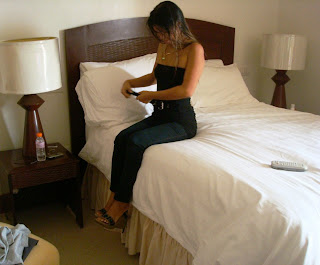 l and I are veritable midgets, so we just about had to take a running leap to get up and into the darn thing. Then, to make matters worse, the springs are extra firm, so that they put a crown on the bed. In other words, you are way up off the floor as it is, and now you feel like you are going to spill out over the side. It’s like sleeping downhill on the edge of a cliff. You get too close to the edge and it’s a long way down. I’m telling you, I developed a phobia from it.

Now, as I said, the beds are tall, so naturally you’d suppose that they’d buy nightstands that are equally tall, right? Wrong! Sitting up in bed watching my beloved TV with a coke in hand, I had to lean way over and down to put my drink on the stand. Of course, if I strayed too close to the edge, off I’d fall.

On that note, both the nightstands and dressers had 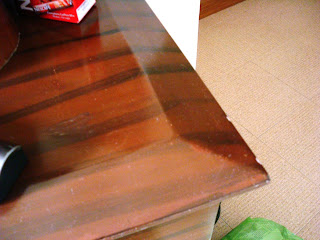 the same ridiculous design on their table tops. I’ve never seen anything like it—they were beveled right along their edges. Because of these dopey slanted edges, more than an inch wide, if I didn’t pay attention and put something on them too close to the slant, off it would slide. I dropped cans of coke onto the floor and other assorted objects, such as coins, my cell, my sunglasses, you name it. Just to make sure, I pushed everything to the center of all the table tops. It drove me nuts. The fact that the nightstands are also like this made them even more difficult to use while sitting in bed since they were so far down from the lofty top of the bed. Getting the point? 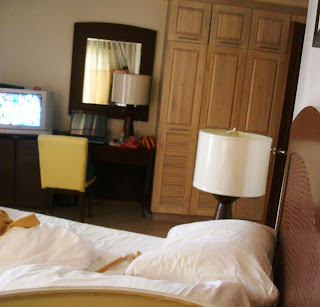 set up all wrong in relation to the TV. (Heaven forbid!)The bed was sideways to the TV. What? So only one person is supposed to watch TV from the double bed at a time? No way. I’d rather have the other bedroom, without the bath, but with the TV where it should be, right in front of the bed; thank you very much.

The lack of ergonomics theme continued down in the hotel restaurant dining room. Aside from the ever-present flies, I realized the problem when I first sat on one of the over padded bench seats and my chin barely reached 6 inches above the table top. Jokingly, I asked the waiter for a booster chair, but he didn’t get th 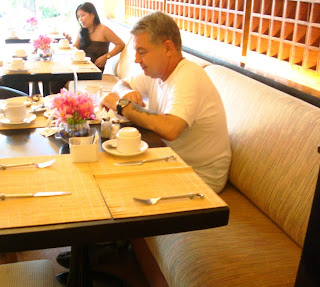 As far as the flies, the dining room is about as far away from the entrance as it can get, so where are all the flies coming from? I used one hand to wave them off while eating with the other; and that’s something you get used to over here, but it shouldn’t happen in a nice hotel restaurant, should it?

I can tell you this: The windows and sliding veranda doors of the suite bedrooms are definitely NOT sound-proofed. We were on the fourth floor over-looking the main boulevard and MAN it was noisy. Some really big trucks continuously rumbled past, and since horn-honking in the Philippines is part of driving here, there was lots of that as well—every bit of that persistent sound seemed to be taking place right outside the thin panes of glass. My veranda door wouldn’t latch properly, so that it was always about 1/8th inch cracked open, which reduced its sound muffling abilities to next to nothing. Bottom line: if you stay at The Crown Regency, ask for a room facing away from the front of the building.

I put this panarama together using multiple shots from my bedroom veranda. In making the horizon level notice that the busy and noisy street below, which is straight as an arrow, became boomarang shaped when I layered the pictures together into one (Click on the pic for a full-sized flickr view of the panarama).

Ever see elevators with hair-trigger doors? Well, they got ‘em at The Mactan Crown R. There is almost no pause after they open. Slam! There they go, and up or down the elevator swoops. I developed a complex to the effect that whenever the doors opened I’d hastily reach in and hold the middle slats to keep them from slamming shut. And don’t try to be nice and step back to wait for it to empty of riders before getting close. I did this once and wasn’t able to get a hand against the door in time—SLAM! Swoop—I missed my chance to get in.

So would I stay there again? Yeah, probably; sometimes it doesn’t pay to expect perfection. Just the same, if the owner and managers happen read this, why not take some of these observations under advisement? 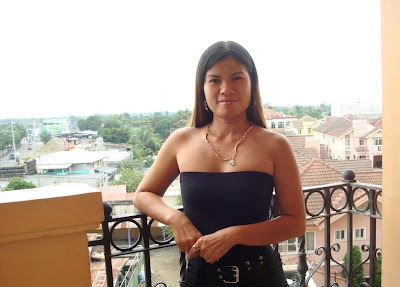 Posted by PhilippinesPhil at 1:22 AM

I can't think that I've ever stayed at a hotel where the television wasn't directly at the foot of the bed. I guess I shouldn't take that for granted.