Art Linkletter, I really wanted him to live forever. . . 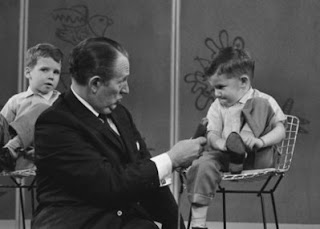 Art Linkletter is gone. He was 97 years young when he passed away today at his home in LA. He had no diagnosed diseases; he just died of old age. Over the years every time I saw him on the tube he seemed no different than what I remembered when I used to watch his show back in the 60s. I was convinced that he would live on and on; probably long after I was gone, but that was not to be.

Art Linkletter was one of the reasons I became so interested in history, and in a real, very personal way. On his show called House Party he was known for his hilarious interviews with young kids, but he would also have on the occasional old timer.

It was about 1964 when he presented a lively old gentleman that was 105 years old at the time of the show; so this ancient time traveler had been born BEFORE the Civil War, BEFORE the first election of Abraham Lincoln. I was only 7 watching him on the show, but even then such a thing impressed me.

Mr. Linkletter had the old guy come up from his front row seat in the audience. He was thin as a rail and sprightly; in fact, to show off his good health he nearly bounded up the few stairs to the stage. He continued to demonstrate the agility belying his age by bending down from the waist and touching his toes, not once but three times. Now that was cool. I remember thinking, ‘Hey, getting old isn’t all that bad. LOOK at this guy!’

He wasn’t able to touch his toes with all his fingers however since he was missing two or three of them. He proudly held his mangled hands up to show off the missing digits—and the ones still there weren't looking all that good either; they had obviously been through the mill a time or two.

In a voice hoarse with age yet quick with wit he told Art the story of his youth, how he had gone to work while still a young lad in the 1870s to help build our up-and-coming intercontinental railway system. It was while doing that roughneck work in the days before machines took over all the more dangerous difficult tasks that he has lost the fingers. It was after seeing that fascinating old man, a living breathing testament of our past that I began to read biographies and history. I never stopped.

Whenever I’ve seen Art Linkletter over the years I’ve remembered that interview with the 105 year old intercontinental railroad builder. I was sure Art would live at least as long as that old fellow. The last time I saw Mr. Linkletter was about two years ago, I think it was on Larry King. Already well into his 90s, Art seemed just as sharp and with it as always. I know I shouldn’t be surprised and disappointed that a 97 year old man has passed on, but I really wanted him to live forever.
Posted by PhilippinesPhil at 10:49 PM

I'm from a generation who only knew of his name but knew nothing else. It sounds as if I really missed out.

Phil, I just read your blog and agree he will be sorely missed. I am pretty sure I remember watching his show in re-runs(but admittedly I'm not sure) as I was not born until '62 but I loved watching him after school. I especially enjoyed and appreciated how he was able to interact and connect with on a personal level and truly communicate with all people no matter their age, education, race, sex or whatever. He was a truly great communicator and always brought out the best and funniest sides of peoples personalities as only a favorite relative, uncle or grandfatherly figure and confidant could. He will be missed and unfortunately I don't see anyone like him on TV, Radio or the Internet anymore and IMHO the world is worse off with his passing. You could see how he truly enjoyed talking with people and cared for everyone equally. A quality sorely missing in many people nowadays sadly. I hope he finds peace, happiness and contentment wherever he is now.

Got introduced to him through his black and white TV program, People Are Funny. Our first exposure to TV. He always exhibited a pleasant and very amiable demeanor in his TV presence. I also recall his spending a segment of his program highlighting an ethnic tribe somewhere in Mongolia where age longevity was very common, and where old people continued with activities younger people did, like horseback riding, etc.

Heard of him again when one of his children figured in some kind of bad situation. Can't remember distinctively, but maybe death by drug overdose or suicide?

His daughter in '69 jumped out a window of a tall building. He blamed it on drugs but none were found during the autopsy. Probably more likely some kind of psych problem. Her death haunted him for the rest of his life. You're right, he did seem very interested in highlighting the very old as well as the very young.