A skewed scuba version of Michael Angelo’s God Reaching Out to Adam. 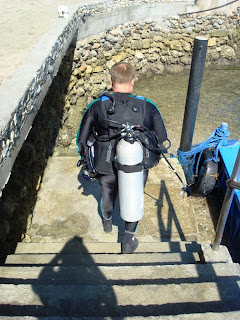 I just uploaded a group of pics to Facebook from my scuba diving trip last week. Going over those photos reminds me what an awesome four day experience that was. Ever since I first strapped on a snorkel and mask decades ago in Puerto Rico I’ve been fascinated by the whole other world existing under the sea. Until you are in it there’s no way you can truly understand the fascination it engenders. I always feel like an idiot when I try to talk about what it’s like to someone who hasn’t experienced it. I tend to gush about it until I realize I’m boring the pants off the poor guy. It’s a lot like when I try to talk history to someone who could not care less. Forget about it!

So now, at the risk of glazing eyes, I will try to describe what it was like, learning how to dive using a self contained underwater breathing apparatus.

Seeing a person decked out with all the 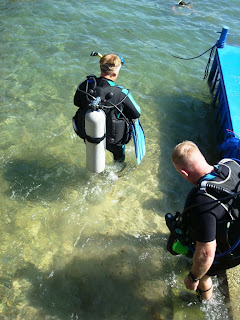 gear is impressive. It all looks very complicated to the layman (like me). In fact, it’s simple as far as how it allows a human to do something that is very unnatural, breathing underwater, although as a system it encompasses an extraordinary bit of engineering.

Until I got schooled up on it I had thought it was all about strapping a tank of compressed air on the back and breathing from it through a mouthpiece at the end of a hose. Actually, that’s kinda true; but there’s a bit more to it than that. I think you can imagine what it would be like if you tried to breathe directly from a tank filled under high pressure—you couldn’t—the air flow has to be restricted in some way. This is done on most tanks in two stages, first through a restrictor valve at the tank and then again from the regulator which is the piece that goes into the mouth. A cool thing is that the air comes out only when you suck air from the mouthpiece, which is also where you exhale through of course. 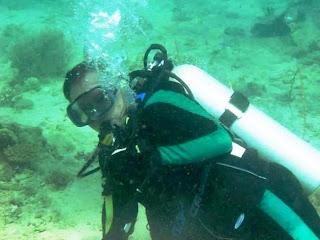 Breathing in and out exclusively through a mouthpiece was natural for me since that’s how one uses a snorkel, but my snorkeling experience also caused me a slight problem since one gets used to NOT breathing underwater with a snorkel. My inclination was to stop breathing as soon as my face submerged. I had to force myself to take in air until it became completely natural. Finally, I developed a mental switch, one way for snorkeling and the other for diving. Such a small thing, but for me it was something I had to overcome. It didn’t take long though; maybe ten or fifteen minutes of practice in the shallows and I was good to go. 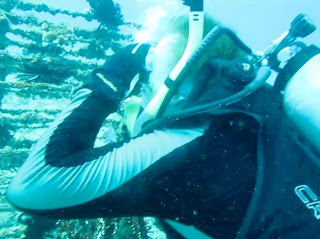 There are other little basic tasks that must be learned before venturing out to the depths. Over the four days I was able to experience and put into use most all of them. For instance, when one lets the air out of the buoyancy compensator, an act that causes the diver to sink like a submarine, at about ten feet down the mask will start to suck hard right up against the face; the further down you go the harder it sucks, a most disconcerting and even painful thing to experience. No problem, breathe a little air out through the nose to produce some positive pressure into the mask and Voila! The mask feels just fine again. 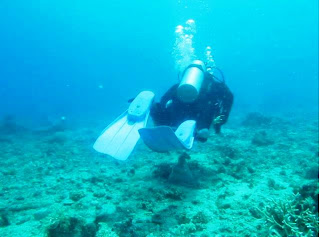 Pressurizing the mask can also cause it to fog up to the point that you can’t see through it. What to do? It’s simple—bend forward and swish water around in the faceplate. But how do you get water in the mask to do that? That’s easy—bend forward and pull the bottom of the mask out ever so little until some water leaks in. But how do you get the water out after defogging the mask? No problem—look up, hold on to the top of the mask and pull the bottom seal away from the face as you blow air into the mask through your nose. This forces the water out through the bottom believe it or not. The mystery is how doing this d 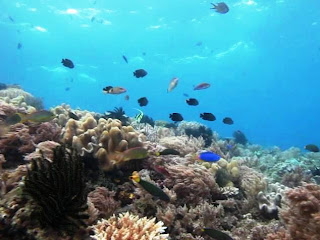 Another undertaking is to learn how to remove both the mask and the regulator underwater and then replace them. I must admit that the first time I did both these things that I felt a bit of panic come on, but I fought through it and got it done.

The mask is tough for me to do in salt water. I have to keep my eyes closed throughout the whole process. The idea is to put it back on and then push all the water out through the bottom of the mask seal by breathing out forcefully through the nose. The problem I had was fighting the urge to breathe back in through my nose while 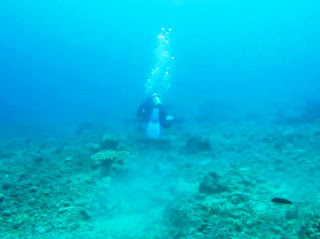 there was still water in the mask. It took me several tries in the shallow end before it became natural for me to do it. I have to say that clearing my mask full of water was THE hardest thing of all.

Replacing the regulator takes a little thought as well. The idea is to have enough air in your lungs so that the water that gets in the mouth can be expelled along with the exhaled air. After that it’s back to normal breathing. Piece of cake.

For a novice diver (like me) buoyancy is what drives the ship. I learned the hard way what a tricky thing buoyancy CAN be. It was on my third or fourth time out when I found out two things: first, make sure there are enough pounds in the w 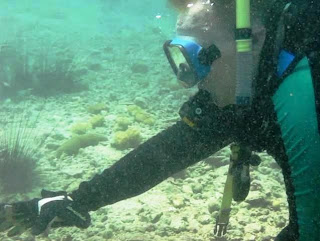 eight belt—better to have too much than too little; and second, the tank becomes a LOT lighter when it approaches empty, and THAT makes the FIRST thing even MORE important.

So, with all that said—there I was—at about 35 feet having just been down for a few minutes at just over 40. My indicator showed I was just touching the red, which on mine was 700 lbs—no biggy; that’s plenty of air to get all the way back to the beach. We turned around and headed back up the hill toward a formation of coral covered boulders, my buddy diver just a little ahead of me. But then we ran into a strong current which caused me to stop dead in my tracks no matter how hard I kicked. I tried to hold on to a boulder but the surge was pressing me slowly away fr 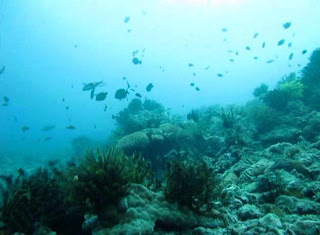 At that point I made a crucial error—I squirted a little air into my vest thinking that if I could get just above the boulder that I would be able to pull myself over it in the direction of my buddy. About this time he saw I was having problems so he turned back and came to me. I felt myself drifting upwards and quickly pushed my deflate button releasing all the air in my vest, or so I thought. It was like a bad dream—I was reaching down for him with him reaching up for me—it was a skewed scuba version of Michael Angelo’s God Reaching Out to Adam. I kicked my flippers like crazy and managed to grab his hand. He pulled me hard and emptied his vest of all air as well but to no avail; now we were both heading topside. No matter what we did we could not stop our slow yet sure ascent. 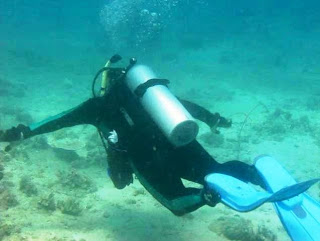 gh to require safety stops. If we had though, we would have blown right through them, probably risking a case of the bends. And THAT little incident demonstrates why novices shouldn’t mess around with deeper diving until they learn EVERYTHING they need to know. After that, I increased my ballast by another six or seven pounds. Oh, and I learned also that to fully void ALL the air in my BC (buoyancy compensator) that I need to bend forward a little to release the air that gets trapped in the vest bladder otherwise. . . So much to learn.

Gee thanks Phil. Now you put a little fear in me about wanting to scuba dive someday. I would still like to do it but I have no desire to go any deeper than what one could safely hold their breath and return to the surface without worry from the bends.

I've learned that a little bit of constructive fear is good in this sport. What kills people is complacency and over-confidence. I was never in danger of getting the bends. I would have had to go deeper than 40 feet for many more minutes before tissue loading would have come into play. Most divers who go deeper than forty feet use computers as part of their diving kit to tell them exactly what they need to know about safety stops and even how soon its safe to fly. Its all about risk to reward and the rewards are more than worth the risks; but don't take my word for it...

I have never practiced Underwater diving but I have done snorkeling.