Final Fun in the Sun at PG 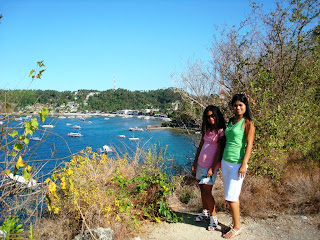 In the boat on the way back to the hotel we decided not to repeat our “blunder of nap” from the day before—no more lying down for a “short” one just because we feel a little tired. Instead of giving in to our exhaustion of the moment the plan was to have a light lunch after a quick shower and change, and then walk up the dirt path over the point for a look at the Ville of Sabang. Doing so turned out to be an excellent decision. For the next two hours we enjoyed the sights and took some nice shots of the town and sea from high up on the point that separates Big La Laguna Beach 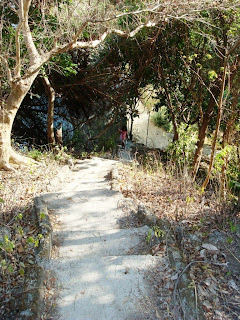 from the little one on the Sabang side of the point. I’ll post a couple of the pics we took of Sabang down and to the east and Big La Laguna to the west.

The path from Big La Laguna Beach over the point toward Sabang this time of year is dusty from the lack of rain and always steep in places. I took the girls up the ruined concrete steps to the top of the point for some photos before heading down the other side to Sabang. From the photos the view from way atop the hill is grandly picturesque.

We kept to the seaward side on our walk to the far end of the town. On the return we kept mostly to the meandering passageway that parallels the beach. This narrow alley is only wide enough for pedestrians as well as mostly covered for when the rains start. Its nice to walk it when you want to keep your feet out of the sand. Its also great if you are shopping for small groceries and souvenir items, or you can take a break along the way and have a coffee or a bite in one of the hole-in-the-wall cafes.

A fun thing for some is to barhop along the beach side. Each resort has a restaurant bar with its own unique view of the bay. Not being much of a drinker these days I’m not big on barhopping, but to each his own.

We observed the construction of the new Sabang pier. It will be a substantial stru 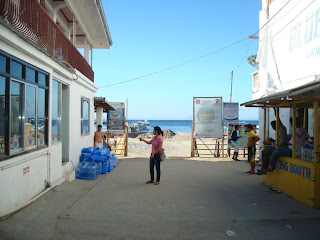 cture of concrete and stone. It’s not quite half finished, but when it is, it looks like it might even be able to accept vehicle ferries. At the moment berthing space on all the beaches from Big La Laguna to Sabang is at a premium—there isn’t enough room for all the boats. I could tell from watching how our own boatmen maneuvered and parked that there are restrictions on who can pull in where and for how long.

I’ll say this; there are some spectacular looking hotels in the Sabang area. Check out my flickr photo set of this trip and check out what I’m talking about. For instance, walking straight up the street from the new pier it soon ascends and bends to the right. Near the top is a magnificent looking place called The Tropicana (see the photos). Its architecture design is anything but tropical; it’s more a cross between Swiss chalet and 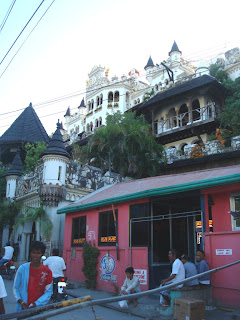 Austrian castle. I didn’t feel rich enough to go inside and check it out—maybe next time.

The next day the plan was to barbecue some chicken on Big Clam Beach (if that’s what it’s called) and of course while there we’d swim out to see the big seawater clams. We gave Mac-Mac the money for the fixings and he took care of the rest. This time they picked us up just after 10:30. We made the same stop at the small pier on San Antonio and picked up another little boatman; the four year old nephew of Mac-Mac’s primary assistant boatman. The cute little guy with his curly blonde locks is the son of an Australian fellow who had a fling with the boatman’s sister. It was fun having him along for the day, a very sweet little boy.

It’s not much of a beach, just a little patch of dirty sand at the bottom of a tree-covered cliff with concrete steps going up to a locked gate that leads to the lighthouse keeper’s hut, or so I was told. An interesting thing for me was the sight of a black rubber pipe, not much larger than a garden hose, disappearing into the water into the direction of the village on San Antonio Island maybe three hundred or more yards acro 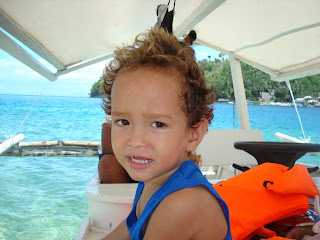 ss the channel. I asked about the paltry pipe and was told that that one narrow tube provided all the potable water for all the families living out there. He said it was either 100 households or 100 people; I can’t remember exactly. I’m positive they don’t use the water from it for watering their yards though. Mac-Mac said the water was piped down from the “mountains” that can be seen away in the distance toward the center of the peninsula.

I much enjoyed the snorkeling there. The water is much deeper above much of the coral which has mostly kept it safe from careless tourists. It amazes me that the fish and coral is so much more different from what I saw only a few hundred yards away at the Mangrove site. The geology is grander, the rocks bigger, the underwater drop-offs more spectacular, and the coral was more expansive and developed. There were more large fish as well. I noticed some old abandoned coral-covered metal fish cages and asked about their presence. Mac-Mac said all fishing is illegal but at times 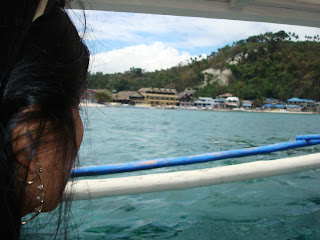 it happens. I imagine most of the poaching is done in the dark of night or by some other surreptitious method. He said there are patrol boats to police this kind of destructive activity but this IS the Philippines after all, with lots of poor hungry people, and just as in all countries everywhere there are also a few greedy selfish ones as well, so there you go.

First thing we did was three of us (Mac2, Jen2 and I) swam the hundred or so yards out to see the giant clams. I've seen them before and they look exactly as they did five years ago. There are no more and no less, I think four or five of them, the largest about a yard long from hinge edge to edge. To me they look more like giant oysters than clams. They are definitely a big draw for all the tourists though. They aren't that deep, but 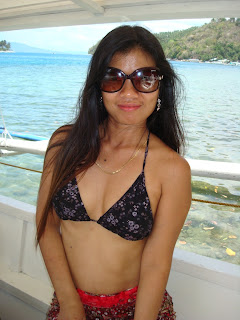 deep enough, maybe 12 or 15 feet down. I packed in a few breaths and went down to touch one just to say I did. 'Okay, I've seen them, let's go...' We made the long swim back and took a break sitting on an old driftwood log near the beached bangka. After that, I spent the next several hours exploring the coral and geological formations up and down that part of the channel.
Later, back at the hotel, Mac-Mac took the girls to Sabang for shopping while I sacked out for a couple hours. I woke up when they came in. Divine was wearing a new beautiful sun dress with a spectacularly colored print. I looked at it closer and was shocked to see that the primary motif seemed to be marijuana leafs.

“Hey, did you notice what’s on your new dress?”

“Well, yeah, but that’s the symbol for marijuana. Why would you buy something like THAT?”

She stood in front of the mirror and gasped, “Oh my God! I didn’t notice that!”

“Turn around, let me see the front.” She did, and sure enough, in large print were the words Bob Marley along with his iconic image. “You DO realize that Bob Marley was a reefer smoking reggae singer, right?” I laughed seeing the gathering horror on her face. “It’s too bad though;" I continued, "I really LOVE the colors. They are beautiful to see on a dress; especially on you.”

I don't think she heard a word I said after she realized what was on the dress. She couldn’t wait to take it off, and hurriedly did so, carefully folding it and placing it in a plastic bag. She declared, "I’m going back NOW to trade it for a different one." She was already texting 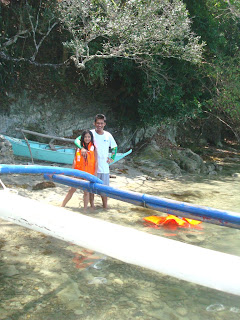 Mac-Mac to come back and pick her up. I LOVE that girl!

Our final full day was spent entirely at a small cove just down from what used to be the Coral Garden dive site. If you’ve read my earlier post about the time I dove into the cave through the underwater opening then you’ll know exactly where we were. I was sickened when I realized that the cave is no longer the pristine place that I had first discovered in 2005. I hope my blog entry did not lead to its ruination, but I suspect that it did. Before, only a few intrepid swimmers and divers would dare go into it, but now anyone can. They’ve opened it up from the top and dropped a ladder in. I didn’t even bother to go see it, I couldn’t bear it thinking that I probably contributed to its undoing. For the four hours we stayed there one boat after another puttered in, about one every twenty minutes, and unloaded its passengers for the walk up to the top of the cave. Invariably they would yell or just talk too loud, all of which I hate to hear in natural places. To me, the sound of the human voice in a place like that is crass; it just doesn’t belong. I always try to speak just loud enough to be heard or just use my hands and gesture. I’m strange that way I guess. 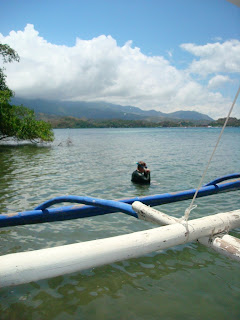 I made a swim out to the old coral garden site. It was true what Mac-Mac said about it; it’s completely destroyed. The once huge beds of glorious multicolored coral in all their varied shapes and sizes are now all gray and flattened. I was told that a series of extremely terrible typhoons (all blamed on The El Nino phenomenon) produced underwater surges that simply bashed the coral into smithereens. I was shocked to see it after remembering how it once was. There are a few small patches of bright reds, blues, greens and orange among the dead grays where the polyps are struggling to regrow into formations, but its going to take many years, probably decades, before it ever gets back to what it once was. And chances are that more typhoons will come and then….

This will be the last post on this particular trip to PG since in just a few hours my buddy, Don, will pick us up for a scuba trip to the same place. I now have an underwater package for my Canon and I’m itching to see what kind of photos and videos it can take. See you when we get back…
Posted by PhilippinesPhil at 1:47 AM

It's a shame about the cave. I've seen that happen to a lot of places like that which I associate with the internet and the ease of getting the word out or probably more to the truth, searching for stuff like that. I've gotten to where I just create fake names and locations to protect things I write about and love the most.