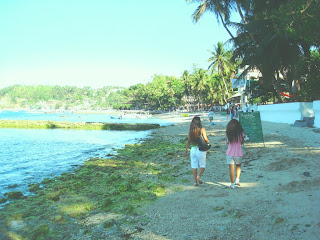 Such a good time was had on our trip to Mindoro that we are already planning to go again soon; but I’m getting ahead of myself. This post is about that trip; it takes up from when we arrived in Sabang by boat two weeks ago today. . .

After the jouncing ride by Bangka boat to the Sabang Beach “terminal”—and by terminal I mean a few feet of beach on the south end of Sabang where the big boats drop off and pick up passengers—we discussed how to make our way to the Laguna Beach Club where we had reservations.

With the three of us standing amidst the swirl of human activity up off the sand under the shade of a restaurant awning I told D: “It’s going to be a long hot walk if we hoof it. Do you want to just catch a small Bangka taxi to the hotel?”

I pointed up the beach, “See, look way down there at the end of the beach. See that point of land with all the trees? We will be staying on the other side of that.”

It didn’t look so far and the three of us had only one small pull-along each, but the walk is all sand, dusty path or rough concrete so I knew that the only real option was to go by bangka. While I was still pointing and peering a beefy, or beefy by Filipino standards, young fellow asked us if we needed a ride somewhere and pointed toward where his boat was parked.

I said, “Yup, we need a ride to Laguna Beach. How much you charge?”

And off we went. He grabbed my bag while one of his boatmen grabbed the girls’ bags. For part of the way we walked the sand just above the water line; much of the Sabang sand is a dirty brown and black from the town’s many runoffs. We followed our boatmen past several d 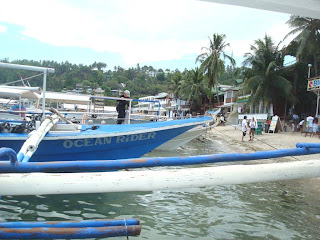 ive resort hotels that line the waterfront from end to end. At times we veered up onto sidewalk depending on the foot traffic in front of us. Five or so minutes of easy walking and we arrived at a spot where six or seven bangkas were crammed together; some were pulled right up on the sand with others tied to the stern of those three or four pulled up onto the beach. As we approached, our boat was in the process of being extricated from the other packed in boats so that it could be brought onto the beach close enough for us to walk up the narrow wooden gangplank that is a part of every bangka’s composition.

It was fascinating to watch the boatmen maneuver their bangkas in and out of the beaches packed tight with other identical boats. The fascination for me stems from watching them deal with each other’s outriggers, which greatly increases the footprint of what would otherwise be a relatively narrow boat. At times they would have to jump out on one of their outriggers or on one of its two connecting spars to make it dip below its neighbor’s, or if they could, they’d simply push down on the other boat’s thick bamboo float with a bamboo pole to allow his own to ride up and over his neighbor’s outrigger framework. Often the process goes quite smoothly, but there are times when stuff gets jammed together and then it takes quite a bit of pushing and pulling and backing up and going at it again. In typical unflappable Filipino fashion, no one ever gets frustrated or perturbed; they just work it till it gets done and the boats get to where they need to be. The hard part for me is keeping my mouth shut as they go about their business. My tendency is to chime in with suggestions or “helpful” comments, none of which is in the least bit listened to anyway by the boys and men clambering about their boats and floats.

The trip by water from Sabang to Laguna only takes a few minutes, no more than fifteen, probably closer to ten depending on the wind and chop. We made use of the time to ask a few questions of our friendly boatman whose name turned out to be Mac-Mac. By the time we got to the beach in front of our hotel we were all buddies—he he had our cell number and we his. From that day until our last Mac-Mac was our man—he took us everywhere we needed to go, which was by his boat.

It’s been more than four years since the last time I stayed at the Laguna Beach Club. Except for some construction upgrades it still looks much the same as it has since my first visit in 2003. With bags in tow we trudged through the sand up the concrete stairs past the outdoor café around the right to the desk. By this time it was nearly 1pm; I was feeling a bit travel weary but our room wasn’t ready yet.

Leaving our bags by the desk we stomped up the wooden steps to my favorite place at the LBC, the upstairs deck of the hotel’s bar and grill. The view from that spot is part of the reason I always go back to that hotel. It feels like a living postcard as you stand there and take it in. The deep blue sky, multi-colored sea, white beach, the hazily distant shores, all bracketed by high tree-covered points of land, provides a stunningly beautiful view. To make it perfect I ordered an ice cold beer. Indeed perfection was attained when my frosty beer was quickly delivered. With great satisfaction I gulped deeply as I also drank in the equally satisfying panorama before me. 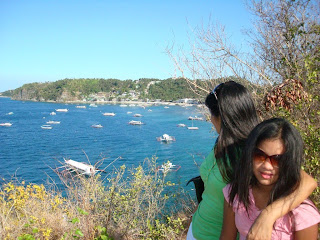 With a great sigh I clinked my now half-empty bottle on Divine’s glass of iced tea and proclaimed in an exagerrated fashion, “Sweety, I hereby declare that we are NOW officially on vacation!”

Wasn't Mindoro in the news fairly recently? I want to say that an earthquake happened there. It's been too long since I've been to the Philippines and I need to get back there.

I don't recall anything negative happening in Mindoro recently. The last bad thing from this country that went international was the big fire in a MetroManila shanty town a couple weeks ago.