Fishpond, and on the Third Day... 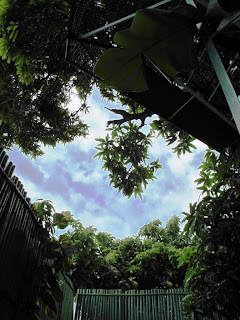 xxxxWork on the fishpond went on hold this morning until after we finished trimming a couple of very large overhanging mango branches. I had mentioned that they needed to come down to Eddie yesterday and he made that the day’s first priority.

Two of his sons then spent most of the rest of the day breaking down the huge pile of branches, stems and leaves into compost. Since moving here late in 07 I’ve prided myself on not throwing out even a sprig of biodegradable waste. Branches, leaves, dead pets, chicken bones, stea 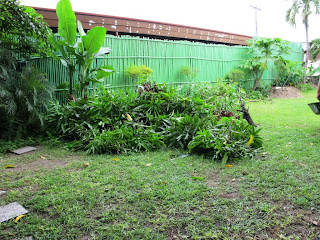 k bones, fish bones, parings and peels, it all goes into the ground where it takes less than three months for all of it to become part of the soil. We are probably the only house in the subdivision that has completely non-smelly garbage cans. To preclude any possibility of malodor I even make my people wash food cans, jars and packaging before toss 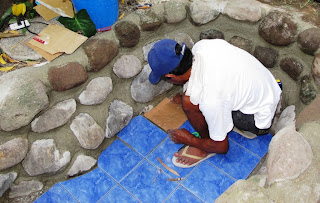 ing it. It’s easy to do, so why doesn’t everyone?

After trimming most of the branches off the south side of the tree last month due to the profane complaints of the cantankerous old fellow next door, and now with the removal of most of the lower branches on the eastern 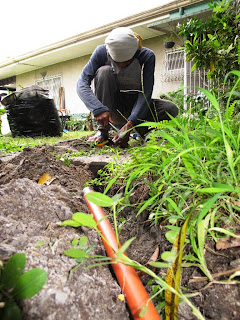 side, there is now a whole lot more light streaming into the fishpond location. Before all the cutting and sawing that area was almost cave like, practically lightless.

Although I enjoyed the earlier shady, coolly restful aspect of the spot directly under the mango tree, I’m thinking the addition of more light will likely make the pond and its waterfall a far prettier spectacle. And hopefully, it will continue to be a soothingly peaceful place to sit and meditate despite the loss of much of the overhead leaf canopy. 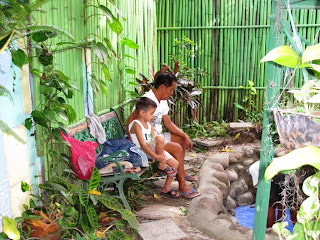 The tile and mortar man was not quite able to finish laying the last of the aqua blue tiles on the floor of the pond. We were one tile short of being able to do it and it being Sunday there was no place open to go buy one; but I get ahead of myself... 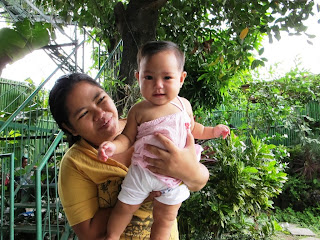 After placing most of the whole tiles yesterday, the really hard part began today. That’s because the rest had to be exactly trimmed to fit around the various stones protruding into the base of the pond. He did this by trimming cardboard squares one at a time until it cou 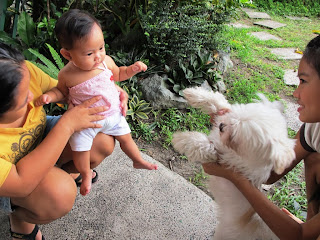 ld be used as a template or pattern to mark the actual tile piece meant to go into that unique spot. It’s a good system but it takes a lot of painstaking effort to make sure each and every tile piece is perfect. 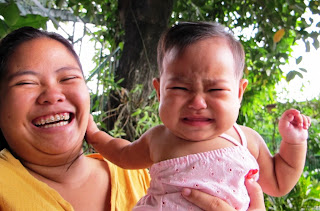 I’ve been doing a lot of cringing these last three days. Divine tried to make them be mindful of all the plants crowding into the workspace for all the good it did. My poor 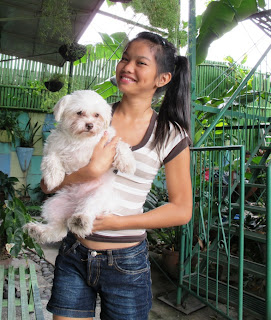 babies are taking a real beating. There are times that I have to just leave the area so that I don’t have to witness their mauling by my worker’s careless movements. After spending so many months pruning, watering, trimming, and feeding them, it’s tough to watch them get mangled — years of work undone in moments. Sigh. 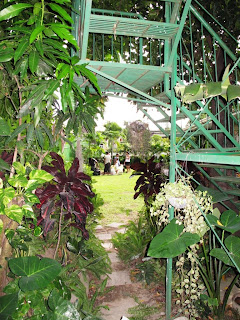 Tomorrow we start work on the waterfall feature for sure. On a piece of paper with pencil and crayons I made a diagram of ideas for Eddie on which I depicted some of the elements I’d like to see in the finished product. I told him what I really want is plenty of action, both visually and acoustically. I want the water to splash and drip off of protruding rocks and rims; as well as to be caught in a series of catch pools from where even more water falling sounds will be made as the wet stuff cascade 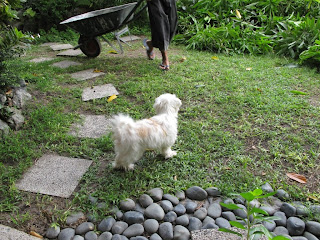 I have to admit, doing this project is a real thrill. Small things like this really make life adventurously fun and interesting, another reason to look forward to getting up in the morning.
Posted by PhilippinesPhil at 3:50 AM

You backyard should be on the Filipino version of Better Homes and Gardens. It is really making my backyard look like a slum.

Ahhhh, shucks Ed. Thanks for saying so...

I agree with Ed! Two thumbs up!

Thanks for taking care of our environment and yup you're right.. We can take care of our surroundings especially the garbage but why can't others do it?

Oh by the way heads up, I heard there is a typhoon this weekend... better be ready with that tarp for the pond...

I think you have a nice crib and you have already done much for 4 years staying on your home as I understand you just moved in there in 2007... Is that your kid? cute! and the dog too! I love dogs..

oh by the way... you like people with names starting with "Ed"? You got Eddie and Edgar...

Thanks for the heads up...

The baby is not mine, but the pretty girl holding the dog is my fiance's daughter, so now she's mine too.

Yes, I am truly lucky to have both my "Ed's." Between the two of them we have made this little place like a slice of heaven. Watching the two of them put their heads together after I provide the basic vision is something to behold.

And we have only been in this place for going on three years in December.

Your backyard looks wonderful Phil. Keep up the fine work. I wish I had a backyard like that to fix up myself!

Thanks Dave. Its more of a sideyard, but I shouldnt split hairs. I'm going to post shortly on days 4 and 5. The project is moving right along, tweaking as we go.

That is an amazing backyard, and the pond will be so nice there. Something about our nature to improve and enjoy the land and environment.. nothing better than your own home to do it with!

Thanks Beau. If you get a chance click on the tag "home improvement" and scroll down to "Beauty is where you make it." Check out the pics of the back area where the tree tower and rock gardens are now. The difference is stunning. I tend to forget how bare and ugly this place used to be....

It's not easy to get household help these days but you are really lucky to have them helping you out... they are super handymen...

WOW! almost three years only you turned this place into really something...

I don't name my girls online but my fiance's three all start with J, so i call her J2, for secondest oldest J.

Something from almost nothing, thats what we did. People ask why I would invest so much time effort and money in a rental. As a military brat and military person for most of my life, where one never spends much time in one place, that question seems alien to me. The answer is: Because I live here. Life is too short to wait until one has their "own place" before making their surroundings worthwhile.

"The answer is: Because I live here. Life is too short to wait until one has their "own place" before making their surroundings worthwhile."

A most profound answer, Phil. And I too had the same questions in mind when I went thru your recent burst of blogposts.

Unfortunately, this attitude is quite unfamiliar locally and maybe elsewhere.

And I can say these things because I feel the same way and the few still surviving landlords I have had can maybe attest to this.

If you drop a US military man into the middle of a desert, or a jungle, or some other horrible place, they (we) WILL immediately "make it home." When finding ourselves in a semi-permanent situation, the first thing we did was to scrounge materials to build porches, then roofs for the porches, then sidewalks, then a hooch to hang out in, and on and on. Oh, and ALWAYS we'd find a way to build a bbq area. If we were there long enough, we'd even landscape! And by that, I mean longer than a few weeks. Its what American GIs do, we improved our surroundings, we brought a bit of home to everywhere we went. At heart I will always be a GI. Plop me down into the middle of a foreign patch and I WILL make it nice, or at least nicer.