Watching Bulbuls in my yard 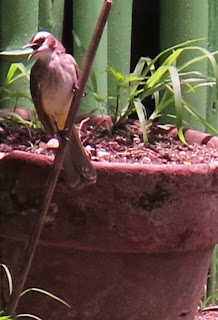 Let’s take a brief break from covering the latest on the fishpond and waterfall build. I will say though that it’s progressing very nicely indeed. Tomorrow we should be installing the top platform on the waterfall wall of stones. I’ll get fully back on that subject tomorrow, but for today, let’s talk about birds .

I’ve always been a bird watcher. I was lucky to have spent my high school years n Michigan, a veritable wild bird lover’s paradise. A short 20 minute walk around the yard or down the street and someone paying even minimal attention can easily spot a dozen different species. I miss that.

I’ve lived in this town now for over eight years and in all that time in two different residences I think I’ve only spotted maybe less than a half dozen different types of wild birds, if that, either perched or in flight. Of course I don’t include in that count escaped chickens or pet pigeons out for their exercise flying.

Of that limited few, my favorite bird to observe has got to be the super flying swallows that swoop and jig and soar after flying insects. These indefatigable little fliers begin their daily swooping pursuits as the heat of the day subsides along with the setting sun. That’s about the same time that the bugs come out as well, so put two and two together…

It’s thrilling to sit on the bench up against the house situated at midyard and just lean back to watch the air show directly above. At any 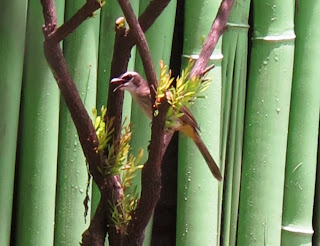 moment during their early evening feeding frenzies a half dozen or more airborne birds can be seen flashing back and forth overhead. Suddenly, they zoom over, appearing from over the roof of our house directly above me, or from across the yard coming directly at me from over the neighbor’s roof.

In midflight at full speed these swallows have the remarkable ability to markedly change direction, presumably when going after a bug snack. I keep waiting for two swallows collide head on. How that doesn’t happen is beyond me. I’ve seen thousands of near misses where I was sure they would crash into each other, but no, each knows to slightly alter direction and they’ll safely zip by each other with plenty of room to spare.

At the moment I am deprived of my evening swallow flights. They are nowhere to be seen this time of year. I imagine that’s because they are migratory. I wonder where they are this time of year. I also wonder where they dwell. From my knowledge of swallows, they usually make mud nests on the side of cliffs or under the eaves of tall brick or stone buildings. I would love to know where these particular ones hang their little birdie hats. In all this time I can rememb 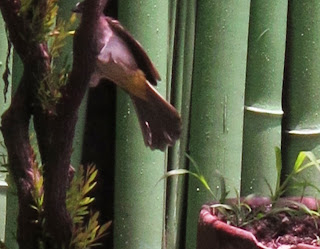 er seeing only one swallow take a perch break from their hunting activity. I was surprised to see it totally not flying sitting on the neighbor’s TV antenna. At first I didn't even identify it as a swallow, since I had never seen one of these particular ones at rest before.
xxx
Part of the reason I think they do not come to a rest much, especially around my little bungalow, is due to the presence of the birds that I’ve posted in photos with this narrative. I finally own a camera that can take pictures of them from far enough away that is still viewable after it’s enlarged. I’ve been aware of this bird for years, since a nesting couple is always in one of my trees or in the next door neighbor’s avocado tree. It wasn’t until this evening though, when I finally had some decent photos of the pair, that I finally identified them. From the photos I’ve found online in pbase under “Wild Birds of the Philippines,” this species is called the yellow vented bulbul.

I love the name of this bird for two reasons: First, it’s named for the plumage on the underside of its butt end, in other words it’s “vent.” Talk about cr 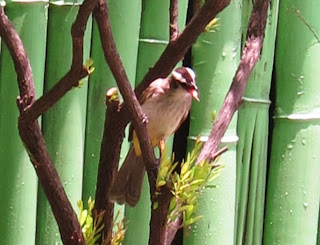 eative naming! If you ever wanted to point to an example of a euphemism this would be it. On the other hand, "bulbul" in the Philippines means pubic hair; so much for being euphemistic! Divine and two of her teenage girls were in the room when I discovered the name of the species and when they read what the bird is called on the website they were quite amused. I guess if we wanted to we could actually call it the yellow-butted pubic hair bird.

Evidently, bulbuls, or at least our bulbuls, are very territorial, and aggressively so. During the times when there is no nesting pair of them around, that is the only time we see other birds dare to land for longer than a few seconds in the yard. There are a significant number of Eurasian sparrows in the neighborhood; at times I’ve counted more than 25 at a time alighting on our fences and in the grass, but as soon as our bulbuls take notice of them in they swoop and no m 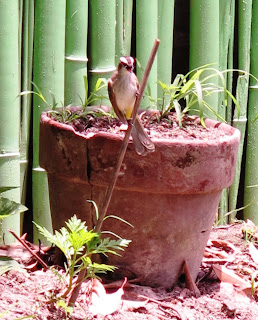 This hostility towards other birds only seems to take place when they have broods nesting. For instance, I took these pictures of these particular bulbuls today and they hardly paid any attention at all to some nearby sparrows that happened to be feeding on some moldy bread in the compost pit less than ten yards away.

Not yet knowing what kind of species it is, I pointed out our pair of bulbuls to Edgar today, asking him if he knew what they are called. He said a lot of the local Pampangans, like him, call it after the ugly sound it makes—the Ta-rhat. Happily, it doesn’t make its sound very often, because when it does, it’s very loud and annoying.

Continuing on about his personal knowledge from encounters with the bird, Edgar said when he was a boy he and his buddies would snare them for roasting. I shouldn’t have but I jumped down his throat a bit for that, “Why would you eat such a little bird? Surely, there is not much meat to be had from it. Geez Edgar, no wonder I never see any birds around here except sparrows! You guys EAT everything that walks, swims and FLIES!” I said that last part laughing.

Edgar is such a sweet guy; chagrined, he 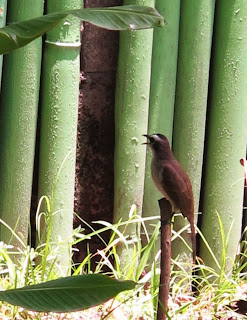 admitted that it was a stupid thing to do, that he wished he’d never done it. You just cannot get miffed at a guy like that. The man is too nice for his own good, and I always tell him so.

One more thing though, Edgar said that the bird has a fiercely strong bite. Looking at the photos I took of my bulbuls, its easy to see how robust their beaks are, which totally backs up Edgar’s claim that they can really bite hard. Its probably also why all the other birds immediately scram when a bulbul flies in their direction.
It feels great finally knowing what these birds are called. And being the guy that I am, I LOVE saying its name--BULBUL…!
Posted by PhilippinesPhil at 5:26 AM